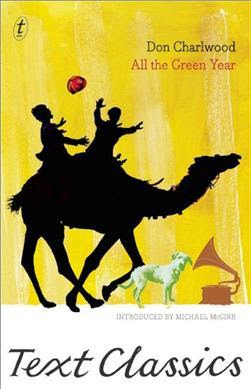 All the Green Year by Don Charlwood is an Australian coming of age classic set during the year of 1929. The story takes place around the Port Philip Bay area of Victoria in the fictionalised town of Kananook, which was modelled on the real town of Frankston when it was still rural.
1929 was the end of an era. It was still the age of silent pictures where ‘mood music’ was played during a movie by a pianist and the American accent was seldom heard.
It was the age of gramophones, coppers for boiling clothes, blacksmiths, cable trams, and milkmen delivering milk into billies outside everyone’s gate. By 1930 this began to change with the coming of talking pictures.

‘Now alien speech poured into our ears: in musicals, westerns, gang warfare, smart comedy. Implicit in my story of boyhood in 1929 would be the suggestion that our era had been much less Americanised than those to come.’

Charlie Reeve narrates the story which mostly revolves around his best mate, Johnno, school, family life, boyish adventures and hijinks.
1929 was the year Charlie turned fourteen and started 8th Grade at school. It was also the year when his grandfather’s mental state worsened and Charlie’s family moved into ‘Thermopylae,’ Grandfather’s house on the cliffs, to take care of him.

This is a memorable story of adolescence, adventure and family friction at the beginning of the Great Depression. Fathers worried about their sons, their school grades and future prospects with the downturn in the economy, and this inflamed the conflicts at home. Both sides in the conflict misunderstood the other or just couldn\’t relate to their concerns and attitudes. It didn’t help that Charlie & Johnno’s teacher, Mr Moloney, targeted the two of them and made life and learning generally miserable.

\’After five grades together this was my last year with Fred Johnston, a tall, melancholy boy of extraordinary physique…head and shoulders above everyone else, as a swimmer and boxer hardly anyone in the town could touch him. He had learnt boxing from his father who at one time during the war had been R.A.N. welter-weight champion…
About Johnno himself there was a contradiction I have never forgotten. He had practically no physical fear, yet he was always afraid of his father and of old Moloney…
His fear of both of them went back a long way; back, I suppose, to the third grade when Johnno had lost his mother. About a year after that Moloney, in a temper, had hit Johnno across the face with the strap. Johnno had gone home and told his father and old man Johnston had given him a note to bring to school. But the note only told Moloney to give him more for not taking his punishment like a man.\’

During the year, Miss Beckenstall, a new, young and pretty teacher replaced Moloney and Charlie and Johnno began to enjoy school and do well. She encouraged them with their writing, and read poetry and David Copperfield with them, giving each of the students parts to read.

\’“Don’t like being Steerforth,” said Johnno. “Look what he’s done to Little Emily.”

I wasn’t sure what he’d done to Little Emily; in any case Little Emily was being read by Janet Baker, who had nothing to recommend her.

“A chap’s really bad if he’s tough on women,” said Johnno gazing into the distance…

He hadn’t heard me. “I’d drop Steerforth cold.” He punched the air absent-mindedly.\’

Charlie’s grandfather and his antics were portrayed so well as was the family’s attitude towards him. It was refreshing to read about their sense of duty in their care towards him, making difficult decisions in order to keep him in his own home. He wasn’t an easy fellow to live with.
There were many humorous anecdotes throughout the book: stealing a camel and riding it to school, antagonising a bull, fist-fights with the town bully; the two boys reluctantly escorting Johnno\’s sister to a dance and \’defending her honour\’ as they were directed to do by her father; but the author also portrayed the pain and discomfiture of boys moving from childhood to adolescence; their physical and emotional upheavals, as if they were recent experiences for himself.

When two of Australia’s foremost critics commented that the first part of All the Green Year read as a ‘book about boys’ but the second part read like ‘a book for boys,\’ the author replied, ‘I was writing as an adult repossessed by boyhood and that the state of ‘repossession’ intensified as the book neared its climax so that, briefly, I shed my age and became in spirit a boy again.’
I think this expresses the feel of the book well. Charlwood sounds like he\’s looking back at events that just happened.

All the Green Year is an evocative novel that is wonderfully Australian. It is honest, compassionate, humorous, sad at times, and a compelling read. It was one of those Aussie classics that I knew about but I’d never seen in book shops. A while ago, I noticed that Erin had used it as a read aloud and their family enjoyed it so I had a look for it online. I saw that Text Classics had republished it so I bought a copy. (They have reprinted some other worthwhile books.)

We’re using it this year in our Ambleside Online Year 10, which I have modified a fair bit for Australia. It had been read in high schools here for twenty years but has suffered the same fate as other noteworthy classics such as I Can Jump Puddles.
Don Charlwood’s writing career spanned more than eighty years and he was made a Member of the Order of Australia in 1992 for services to Australian Literature. He served in Bomber Command during the Second World War and later wrote several books about his experiences during this time. He died in 2012 aged ninety-six.

10 thoughts on “An Australian Living Book: All the Green Year by Don Charlwood (1965)”