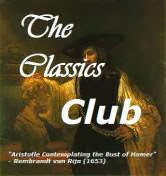 I joined The Classics Club five years ago with the intention of reading 50 books in five years. I managed to read and review 71 books in that time so now I’m starting again.
So here we go with some of the books I’d like to read in the next five years. I’m adding some ‘modern classics’  – books that were written in the last 25 years and including some that I’ve already read years ago and want to re-visit.

The Castle on the Hill (1941) by Elizabeth Goudge

The Home-Maker by Dorothy Canfield Fisher (1924)

The Return of the Native by Thomas Hardy (1878)

The Making of a Marchioness by Frances Hodgson Burnett (1901)

William – An Englishman by Cicely Hamilton (1919)

The God Who is There by Francis Schaeffer (1968)