During the month of April I\’m linking up at Simpler Pastimes for Amanda\’s Classic Children\’s Literature Event. I hope to read at least two books for the Event and here is the first (I cheated and actually started before the 1st April…): Sir Nigel by Arthur Conan Doyle. 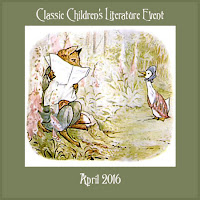 Sir Arthur Conan Doyle is best known for his Sherlock Holmes\’ detective character but he also wrote some excellent historical novels.
In 1891, Doyle\’s novel, The White Company, was published. This book tells of the adventures of Sir Nigel Loring and his men and is set during The Hundred Years\’ War. Fifteen years later, in 1906, the \’prequel,\’ Sir Nigel, was published. This book, set at the beginning of the war, details the exploits of the squire before he became a knight.
Nigel of Tilford is the last in a long line of a famous but now impoverished family. Brought up by his aged grandmother, the Lady Ermyntrude, Nigel is small in stature but has a heart full of chivalrous intent, and is determined to win honour and become a knight.
Together with his lusty attendant, Aylward, they find adventure and seek their fortunes in England and France alongside Edward III, the Black Prince and Sir John Chandos, a Knight of the Garter. 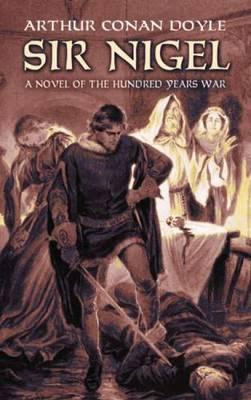 If you\’ve read The Merry Adventures of Robin Hood and Otto of the Silver Hand by Howard Pyle, you will get an idea of what to expect from this book. Doyle\’s humour is reminiscent of Pyle\’s Robin Hood. Sir Nigel is brimming with humorous episodes and downright fun as Nigel follows his romantic ideals and goes about \’winning worshipful worship.\’ However, there is also much serious content and brutality that reflects the time period of the story, which is also the case in parts of Otto of the Silver Hand, but even more so in Sir Nigel.
A couple of instances of the more serious aspects of the book which come to mind:
In Chapter XI of the story, the reader is introduced to Sir John Buttesthorn and his two daughters, Edith and Mary:
…Never had two more different branches sprung from the same trunk. Both were tall and of a queenly graceful figure. But there all resemblance began and ended.
Edith was yellow as the ripe corn, blue-eyed, winning, mischievous, with a chattering tongue, a merry laugh, and a smile which a dozen of young gallants, Nigel of Tilford at their head, could share equally among them. Like a young kitten she played with all the things that she found in life, and some there were who thought that already the claws could be felt amid the patting of her velvet touch.
Mary was as dark as night, grave-featured, plain-visaged, with steady brown eyes looking bravely at the world from under a strong black arch of brows. None could call her beautiful, and when her fair sister cast her arm around her and placed her cheek against hers, as was her wont when company was there, the fairness of the one and the plainness of the other leaped visibly to the eyes of all, each the clearer for that hard contrast. And yet, here and there, there was one who, looking at her strange, strong face, and at the passing gleams far down in her dark eyes, felt that this silent woman, with her proud bearing and her queenly grace, had in her something of strength, of reserve, and of mystery which was more to them than all the dainty glitter of her sister.
Later on in Chapter XII, Edith is deceived by a cunning nobleman into running away with him after he makes a false promise of marriage. Nigel, Mary and an old priest seek out the couple and find, as they expected, that the nobleman had no intention of marrying Edith but it was not until Nigel had a dagger at the man\’s throat that Edith saw through the deception. She returned home chastened and thankful that she had escaped from a situation that would have brought shame and disgrace to both herself and her family.
This situation was handled so well by Doyle that younger readers could get a sense of the moral peril Edith was in without being burdened by information above their heads or maturity level.
Some other scenes occurred which may be too intense for some younger readers:
The butcher of La Brohiniere had captured some of Nigel\’s company and imprisoned them in a castle and when the English tried to make an attempt to free them, La Brohiniere started to hang some of the men from the parapets. When Nigel later succeeded in finding a way into the place where the English were imprisoned, he found a strange and horrible scene:
It was a great vaulted chamber, brightly lit by many torches. At the farther end roared a great fire. In front of it three naked men were chained to posts in such a way that, flinch as they might, they could never get beyond the range of its scorching heat. Yet they were so far from it that no actual burn could be afflicted if they could but keep turning and shifting so as continually to present some fresh portion of their flesh to the flames. Hence they danced and whirled in front of the fire, tossing ceaselessly this way and that within the compass of their chains, wearied to death, their protruding tongues cracked and blackened with thirst, but unable for one instant to rest from their writings and contortions.
Sir Nigel would appeal to anyone interested in historical, well-paced, adventurous types of book. I\’d recommend it for confident readers who have enjoyed books by  authors such as G.A Henty, Rosemary Sutcliff, Henry Treece, and especially Howard Pyle. Each of these authors wrote realistic historical fiction for children. Most of my children read this book around the ages of 10 to 12 years and thought it was a great story. Moozle (11years of age) is reading it for the second time. I think the humour throughout is an added attraction for her and helps to keep the story buoyant.
The passages you may want to pre-read before handing the book to your children are from these two chapters which I\’ve linked to a free online version:
Ch XII How Nigel Fought the Twisted Man of Shalford
Ch XX How the English Attempted the Castle of La Brohiniere
There is an excellent audio version narrated by Stephen Thorne: 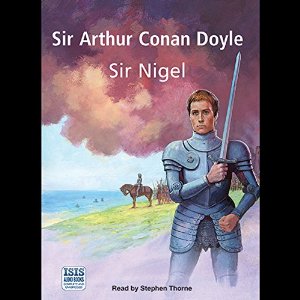 Arthur Conan Doyle was proud of the research that went into his historical novels and he wrote this explanation about the content of Sir Nigel:
I am aware that there are incidents which may strike the modern reader as brutal and repellent. It is useless, however, to draw the Twentieth Century and label it the Fourteenth. It was a sterner age, and men’s code of morality, especially in matters of cruelty, was very different. There is no incident in the text for which very good warrant may not be given. The fantastic graces of Chivalry lay upon the surface of life, but beneath it was a half-savage population, fierce and animal, with little ruth or mercy. It was a raw, rude England, full of elemental passions, and redeemed only by elemental virtues. Such I have tried to draw it.
\’The business of education is with us all our lives…\’