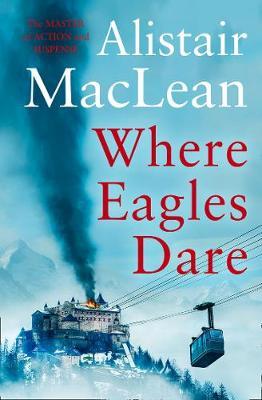 The books by authors I’ve listed here are those our children enjoyed reading in their spare time when they were in their teens. An asterisk means some of my children read it before their teens or that it’s suitable for a younger age level. Just be aware that this is only my opinion & even in our own family, what might have been right for one child at age 12 or 14 years didn’t necessarily mean it was suitable for another at the same age.

Action, intrigue, espionage; one man against all odds, fast-paced. A number of his books have been made into films and although you wouldn’t call them great literature, they’re mostly good reads (his earlier books are better) & and his writing doesn’t have the ‘romance issues’ or inapproriate material of other authors who have written books in a similar genre. Probably most suited to ages 14yrs and over, but I let my 12 year old boy read a few (*).

His books are often available secondhand or try here. 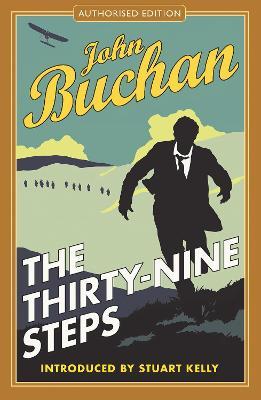 A prolific author, he also wrote historical works such as Sir Walter Scott and The Great War but is better known by far for his suspenseful thrillers such as The Thirty-Nine Steps in which he introduces the hero, Richard Hannay.  Framed for murder, Hannay embarks upon a life of espionage in the lead up to the First World War. This book and four others immediately below follow the hero’s life through danger, intrigue & war and are great reads with intricate plots & interesting characters. These books are available here:

The Thirty-Nine Steps *
Greenmantle
Mr. Standfast
The Three Hostages
The Island of Sheep

I’d recommend starting with The Thirty-Nine Steps for a younger reader – it’s not as involved as some of his others and the plot is easier to follow. I think 14 year olds & up would appreciate Buchan’s other books most.
I haven’t included some of his other titles that I’ve read & enjoyed here eg. Witchwood, as I think they’re more suited to an older audience. My thoughts on a couple of the books are here & here.
Buchan’s books are in the public domain. 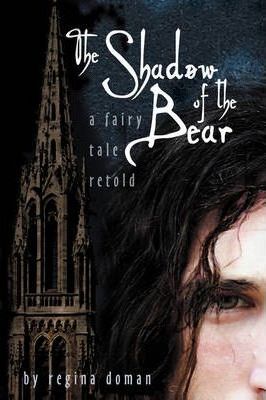 Regina Doman has written a series of modern day fairy tales for teens based some original fairy tales eg. Snow White, Sleeping Beauty & Ali Baba which my daughter started reading when she was about 16. I wrote about these books on my post, 8 Favourite Fairytale Retellings for Teens. The author’s blog has some details about the books. I think they are done well, particularly the first three, Shadow of the Bear, Black as Night, & Waking Rose (it helps if you know the original tales) but there are some themes you should be aware of before giving them as free reads. For an interview with the author see this website.

Her books may be bought here.

“The more truly we can see life as a fairytale, the more clearly the tale resolves itself into a war with the Dragon who is wasting fairyland.” – G.K. Chesterton.
On the theme of fairy tales, a book we’ve all enjoyed is Beauty by Robin McKinley, a wonderful re-telling of Beauty & the Beast. This is suitable for younger readers, around 12 years & up.

At two years of age Rosemary Sutcliff contracted Still’s Disease (a type of Juvenile Rheumatoid Arthritis) and spent most of her life in wheelchair. In her early years she had to lie on back and during this time she was read to by her mother – books by Dickens, Thackeray, Trollope, and Greek & Roman legends.

She was a late reader and due to her condition was mostly educated at home. At the age of 14 years she began her training in the art of miniature painting; published her first children’s book in 1950, and afterwards devoted her time to writing children’s historical novels.
One of our favourite authors, Rosemary Sutcliff has written some wonderful historical fiction. Many of her books are suitable for younger readers. Some favourites which our children read for themselves around the ages of 12 years and up:
The Eagle of the Ninth *
The Lantern Bearers
The Silver Branch

Bonnie Dundee – Hugh Herriott was a young lad who had grown up in a Scottish Covenanter family. When he witnesses an attack on Government troops in which his older brother kills a boy not much older than Hugh himself, he is taken by Government troops and brought before Bloody Claver’se (Bonnie Dundee). Claverhouse questions him and then sets him free but Hugh cannot forget the ugly attack in which the young boy was killed:

I wanted no more to do with men and the world of men ever again. The pull of two loyalties within me was over and done with, and there was some relief in that. I knew now that I was like Montrose: that I was no Covenanter nor ever could be. But oh, the grief was on me was sore.

An insightful book that sensitively portrays Jacobite Scotland in the seventeenth century.

‘To the Lords of Convention ’twas Claver’se who spoke,
‘Ere the King’s crown shall fall there are crowns to be broke,
So let each Cavalier who loves honour and me,
Come follow the bonnet of Bonny Dundee!’
Walter Scott
Lady in Waiting  – Bess Throckmorton, Maid of Honour to Queen Elizabeth I, is secretly married to the ambitious young Walter Ralegh. A delightful historical novel of Elizabethan times.


Song for a Dark Queen – A fictionalised account of Queen Boudica of the Iceni and the Roman invaders.
Sutcliff’s books have been reprinted over the years but they’re not consistently available. Try here or secondhand shops. 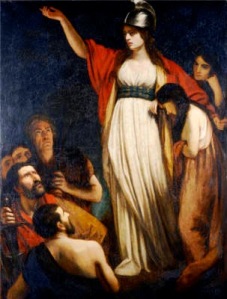 Queen Boudica by John Opie
A biography of the author is here.
Sir Arthur Conan Doyle (1859-1930)
* Sir Nigel – set in the earlier part of the Hundred Year’s War
* The White Company – an exciting adventure also set during the Hundred Year’s War.
These two books are companions to each other but can be read in any order. The White Company was probably the favourite out of the two for us. The author’s books are in the public domain.
* Study in Scarlet – Doyle’s detective mystery where he first introduces Sherlock Holmes and Dr. Watson.
* The Adventures of Sherlock Holmes
* The Hound of the Baskervilles
G.K. Chesterton (1874-1936)Most of my children loved Chesterton’s quirky writing but one of the boys just didn’t take to him at all. They are all available free online.
Father Brown series
The Man Who was Thursday
Club of Queer Trades
The Napoleon of Notting Hill