During the month of April I\’m taking part in a Poetry Celebration (see link on the right). I recently started reading Testament of Youth by Vera Brittain, a WW1 memoir, described as \’A haunting elegy for a lost generation.\’ and decided to read some World War 1 poetry for the challenge. Vera Brittain had become engaged just before her fiancee went to the front in 1915. She writes of the tension she felt every time she heard the sound of the doorbell or the ring of the telephone, thinking that it could be news that her fiancee was dead. In addition to this continual anxiety, a new fear began to plague her:

…a new fear that the War would come between us – as indeed, with time, the War always did, putting a barrier of indescribable experience between men and the women they loved, thrusting horror deeper and deeper inward, linking the dread of spiritual death to the apprehension of physical disaster. Quite early I realised this possibility of a permanent impediment to understanding. \’Sometimes,\’ I wrote, \’I have feared that even if he gets through, what he has experienced out there may change his ideas and tastes utterly. 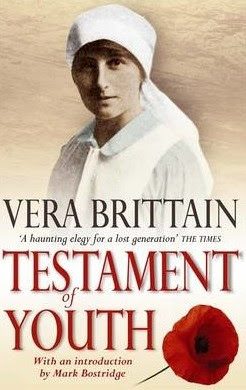 When I read Leon Gellert\’s poem, The Husband (? 1917) it confirmed the validity of Vera\’s fears. The husband comes home bereft and unable to shake off the memories and trauma of the war. He keeps his memories to himself and a barrier falls between himself and his wife as he thrusts the horror deeper within himself. He cannot even touch his wife\’s hair without the sense that he is defiling her. The husband has left the war zone but the war still goes on inside him.

Yes, I have slain, and taken moving life
From bodies.  Yea! And laughed upon the taking;
And, having slain, have whetted still the knife
For more and more, and heeded not the making
Of things that I was killing.  Such \’twas then!
But now the thirst so hideous has left me.
I live within a coolness, among calm men,
And yet am strange.  A something has bereft me
Of a seeing, and strangely love returns;
And old desires half-known, and hanging sorrows.
I seem agaze with wonder.  Memory burns.
I see a thousand vague and sad tomorrows.
None sees my sadness.  No one understands
How I must touch her hair with bloody hands.

5 thoughts on “An Elegy for a Lost Generation”