Parents as Rulers is the title of the second chapter or essay in Charlotte Mason\’s book, Parents and Children. The idea that we rule our children sounds almost strange to our modern ears. Isn\’t that what controlling, legalistic parents do?
To rule means to have authority over or to govern – that is, to direct and control; to keep within the prescribed limits; to regulate, to influence, to restrain.

When children are very young, we have to exercise control over them until they learn some inner restraint. To do otherwise would be neglectful, not to mention dangerous. But while we recognise the principles of authority and obedience in the home, there are parameters to be aware of:

* Parents are under God\’s authority; they are His deputies i.e. they have authority to act on His behalf. \’Order is the outcome of authority.\’ On the other hand, children are quick to discern if parents are being arbitrary (making rules for their own convenience) and are not governing by fixed principles.

Christ and the Centurion by Paola Veronnese c.1571 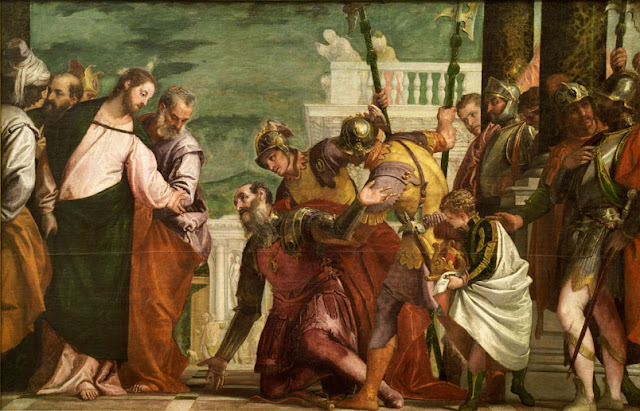 In School Education, Pg 15, CM distinguishes between authority and autocracy and defines the latter as \’independent or self-derived power.\’ Authority, on the other hand is neither of these. It isn\’t harsh or indulgent and operates on fixed principles.

* Parents represent God to their children – the child makes his first approach to the Infinite through his parents.

…a human being comes into the world, not to develop his faculties nor to acquire knowledge, nor even to earn his living, but to establish certain relations…
To complete his education, I think there is but one more relation to be considered – his relation to Almighty God.
School Education, Pg 89

* The authority of parents is provisional (temporary; for a set time) and has limitations

Charlotte Mason said that no parent escapes the call to rule. He may abdicate or give over his functions and authority to someone else, but in so doing, he hands over his rights as a parent to that person.
She writes about the practice of giving the training of infants into the hands of institutions or \’Maternal Schools,\’ (which I mentioned here) and said that it was a new thing in the history of the world and that even the Spartans left the children to their parents for the first seven years!

Perhaps such public deposition of parents is the last calamity that can befall a nation. These poor little ones are to grow up in a world where the name of God is not to be named; to grow up, too, without the training in filial duty and brotherly love and neighbourly kindness which falls to the children of all but the few unnatural parents.

The Abdication of Parents

Parents may abdicate their authority formally or by default and such abdication is immoral. In  Towards A Philosophy of Education there is an interesting observation about anarchy – it is a mere transference of authority. The causes of this are:

* Parental desire for approval or popularity results in them allowing children from an early age to do what is right in their own eyes.

* Busyness and pre-occupation – one day the parent wakes up to find the authority he has neglected to use has been taken up by others not as competent.

* The love of an easy life lures parents into letting things take their course. Their children seem to be doing fine, they can relax…

The Limitations of the Parent\’s Authority

* Parental authority is solely for the advantage of the child – I really like the examples CM gives here: a mother makes her adolescent daughter go outside and get some exercise, rather than allow her to sit around inside reading or whatever – because it\’s in the best interests of the daughter. The introverted dad who discourages his children from social interaction because he is a man of quiet habits, is not considering their needs, but only his own, and is using his authority unlawfully. Bringing up children is not about parental comfort and when I\’ve taken that road the temporary peace is soon overtaken by longer lasting consequences.

* There comes a time when the parent\’s right to rule is finished and they need to abdicate gracefully – even if the grown up son or daughter still lives at home. And if the parents think their offspring are not to be trusted in ruling themselves, CM has a an opinion on that –

…most likely their parents are to blame for not having introduced them by degrees to the full liberty which is their right as men and women.

Mmmm…we have young adults still living at home, and while I agree that children need to be eased into this liberty over time, I also think it\’s difficult for them to fully attain this while they\’re still at home. They can contribute financially, but until they have the responsibility of their own homes, they don\’t really appreciate all it entails.
There\’s a tension between many parents who still have their grown-up children at home, and we\’ve certainly felt it at times, but we\’ve also noticed that it wasn\’t difficult for them to adapt to having their own households when they did finally leave home. They came into full liberty when the final responsibility was on their shoulders and not ours.