My mother died at six-thirty this morning. ‘Died’ sounds so harsh but something in me resists the ‘passed away’ or ‘passed’ terms. I always feel that they’re terms of avoidance that have taken over our expression of this common destiny we all eventually experience. But forgive me if you find that offensive. I’m just writing what I feel personally.

Mum had been deteriorating health-wise for some time but it was only a couple of months ago that she was diagnosed with cancer. She had surgery to de-bulk her tumour (mostly to relieve pain) shortly after her diagnosis and we were surprised that she recovered as well as she did. (She’s had heart trouble for many years and wasn’t a great candidate for an anaesthetic.)
We’d just returned from our trip to the UK when she was hospitalised so my older daughter and I went to see her just before the surgery and I am so grateful for the time we had with her. My Mum has never been really demonstrative and it’s taken me a long time to realise how much her experiences in childhood affected her ability to express her love. Rejection hung over her all her life and she rarely allowed herself to be vulnerable.
She was in quite a bit of pain when we went to see her and as she held my daughter’s hand and mine, she told us how much she loved us, called us ‘My bonnie wee lassies,’ and kept kissing our hands. I have five sisters and each of us experienced a similar outpouring of her love during those few days before and after surgery.

Our extended family is scattered all over Australia but one of my sisters organised a family get-together over Christmas and Mum was able to meet some of her grandchildren and great-grandchildren during this time.
Unfortunately, the tumour just enlarged again and she was back to where she started prior to surgery within a couple of months.
I was devastated when I went to see her on New Year’s Eve. She stared at me very distrustfully and snapped at me a few times. ‘The lights were on but there was no one at home.’ One of my sisters saw her the next day and Mum recognised her but there was a withdrawal of the real person as the days and weeks passed.
As her pain increased, she was placed on palliative care which later involved a morphine pump and so she was uncommunicative for the few days before she died. 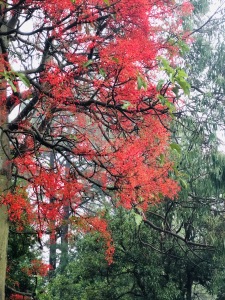 I was given a book of Robert Burns’ poetry for my birthday recently and I found this prayer that I read out loud to myself a number of times as she came closer to death:

A Prayer, in the Prospect of Death

O THOU unknown, Almighty Cause
Perhaps I must appear!
If I have wander’d in those paths
As Something, loudly, in my breast,
Remonstrates I have done.

Thou know’st that Thou hast formed me
With Passions wild and strong;
And list’ning to their witching voice
Has often led me wrong.

Where human weakness has come short,
Or frailty stept aside,
Do Thou, ALL-GOOD, for such Thou art,
In shades of darkness hide.

Where with intention I have err’d,
No other plea I have,
But, Thou art good; and Goodness still
Delighteth to forgive.

Helen Macdonald’s  H is for Hawk, is a memoir written after the sudden death of her father. Struck with grief, she bought a hawk and set out to tame it, untaming herself in the process. She wrote:

‘I thought that to heal my great hurt, I should flee to the wild. It was what people did. The nature books I’d read told me so. So many of them had been quests inspired by grief or sadness. Some had fixed themselves to the stars of elusive animals. Some sought snow geese. Others snow leopards. Others cleaved to the earth, walked trails, mountains, coasts and glens. Some sought wildness at a distance, others closer to home. ‘Nature in her green, tranquil woods heals and soothes all afflictions,’ wrote John Muir. “Earth hath no sorrows that earth cannot heal.”
Now I know this for what it was: a beguiling but dangerous lie. I was furious with myself and my own unconscious certainty that this was the cure I needed. Hands are for other human hands to hold.’

My mother had had a ‘great hurt’ – a number of great hurts – and in some ways she ‘fled to the wild.’ She always loved animals, especially those that were abandoned, neglected or unwanted by others, and sometimes she seemed to me to care more for them than people. This, and her reticence to display her feelings, came out of her sense of rejection. But fleeing to the wild wasn’t the answer. It wasn’t until she was facing the prospect of her own death that she knew she needed to hold our hands.
We’ve had a good share of grief and loss in our family, especially in the past six years, and I know my natural inclination is to withdraw during these seasons.
I was struck with Helen Macdonald’s words above, ‘Hands are for other human hands to hold.’ We need each other; ‘the wild is not a panacea for the human soul; too much in the air can corrode it to nothing.‘

One thought on “Grief and Loss”