The Fortunes of Richard Mahony is a 943 page classic and an Australian one at that. It is also a tragedy. The author relentlessly follows the ‘fortunes’ of both Richard Mahony and his wife, Polly (known as Mary later in the book), the ups and downs of their rollercoaster-like lives, the inevitable sadness of their circumstances. 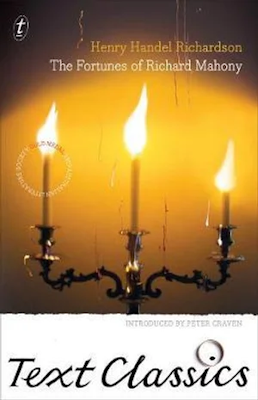 Mahony is an Irish immigrant whose restless nature will never allow him to settle anywhere for very long. Although he is proud and exceptionally thin-skinned, he is at heart a kind man. Mary is originally from England and puts down roots easily. She is loyal, tends to see the best in people and makes the most of circumstances. They are as different as chalk and cheese in many ways but they care for each other and life goes on reasonably well it becomes clear that Mahony will never settle anywhere.

The Fortunes of Richard Mahony was written between 1917 and 1929 as a trilogy: Australia Felix, The Way Home, and Ultima Thule, but was re-published as one book in 1930. Henry Handel Richardson is the pen name of Ethel Florence Lindsay Richardson (1870-1946).

The book begins during the mid 1800’s gold rush in Ballarat where Mahony works in his store selling supplies to the miners. He had originally qualified as a medical doctor before emigrating to Australia but set that aside for the lure of the goldfields. He meets Mary on a trip to Melbourne when he is in his late twenties and she is only sixteen. They marry soon after meeting and she comes to live in Ballarat.

With his wife’s encouragement, Mahony takes up medical practice again and does very well but his restlessness makes him miserable.  He insists that life in England would be much more suitable for them, culturally and socially. So off they go only for Mahony to find that the grass is not as green as he had thought. Doctors were still not much higher in the social scale than barbers in this ‘slow-thinking, slow moving country.’

‘Long residence in a land where every honest man was the equal of his neighbour had unfitted him for the genuflexions of the English middle-classes before the footstools of the great.’

Although his pride was hurt by the attitude of the people to his profession, he was furious when he learnt that Mary was snubbed by some of the ladies of the town. Studying her objectively, he realised that she was different. Her manner was natural and spontaneous which contrasted to their restraint and it seemed to him that,

‘…into all Mary did or said there had crept something large and free – a dash of the spaciousness belonging to the country that had become her true home.’

There are some interesting backdrops to this book: the Victorian goldfields and the Eureka Stockade, the Crimean War, Lister’s experiments in Glasgow, the English class system, and the fear of the Kelly Gang in country Victoria. It touches, too, on the treatment of the mentally ill – asylums were basically prisons and visits by relatives were discouraged. Mahony becomes intensely interested in Spiritualism for a time, attending seances and the like – apparently Ballarat had a small group of very devout believers in the 1800’s.

There are also many philosophical tangents in the book as Mahony thinks about faith, science and eternity.

It’s interesting reading this in 2020 where the average lifespan is significantly longer than it was in the 1800’s. I kept reading jarring comments about someone being past their prime at 39 years of age ?! and a person was described as ‘very old’ when they were 61 or 62 years old.

The Fortunes of Richard Mahony is a very compassionate and in-depth exploration of a marriage. At different times the author allows the couple to share their individual thoughts. I thought this was very well done and helped me to understand both parties. Mahony’s personality is so thoroughly explored that even though at times he appears to be a real jerk, one cannot help but feel some empathy. He tended to have flashes of inspiration that came too late:

‘For such a touchy nature I\’m certainly extraordinarily obtuse where the feelings of others are concerned.’

‘To be perpetually in the company of other people irked him beyond belief. A certain amount of privacy was as vital to him as sleep.’

‘His first impressions of people – he had had the occasion to deplore the fact before now – were apt to be either dead white or black as ink; the web of his mind took no half tints.’

As time passed, Mahony grew increasingly withdrawn. His work left no time for friendships, so he said, and although his wife was dear to him he missed the companionship an old friendship provided. The ‘solid base of joint experience’ was gone but his life had become too set to allow him to start building another.

‘…the one person he had been intimate with passed out of his life. There was nobody to take the vacant place…He had no talent for friendship.’

Richardson was a gifted woman and an excellent writer. Obviously well-educated, her writing is peppered with allusions to mythology and Latin words. From what I’ve read of her life, this book has strong undercurrents of her own experiences.

Linking up with Brona for the 2020 AusReading Month.

11 thoughts on “An Australian Classic: The Fortunes of Richard Mahony by Henry Handel Richardson”