Ellis Peters was the nom de plume of Edith Mary Pargeter (1913-1995). I started reading her Brother Cadfael series of Mediaeval whodunnits set in England in the 12th Century about fifteen years ago. They are best read in order, although I haven’t done so as the books are not always easy to find here.

Cadfael, originally from Wales, had turned Benedictine monk after life as a soldier and sailor and was well versed in the ways of the world. The earlier books elaborate on this and introduce some characters such as Hugh Beringar – the deputy sheriff and Cadfael’s close friend; Abbot Radulfus and others who re-appear in subsequent books. 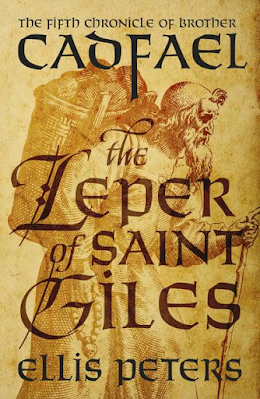 The Leper of Saint Giles was written in 1981 and is the Fifth Chronicle of the series. The story is set in the year 1139 when King Stephen was on the throne.

‘He had seen battles, too, in his time in the world, as far afield as Acre and Ascalon and Jerusalem in the first Crusade, and witnessed deaths crueller than disease, and heathen kinder than Christians, and he knew leprosies of the heart and ulcers of the soul worse than any of these he poulticed and lanced with his herbal medicines.’

When visiting the leprosy hospital at Saint Giles to restock their medical supplies, Cadfael arrives just as preparations for a noble wedding are in progress. He witnesses the bridegroom, Huon de Domville, arrive with his entourage. Domville is a shrewd, malevolent man, and quite a bit older than his intended young bride.

The young woman rides in later, accompanied by her uncle and his wife, her guardians after her father died. Cadfael recognised her as the granddaughter of a famous knight who had fought in the Crusades. It was also obvious to Cadfael that the young girl had had no say in the matter of her marriage and discovers that the girl is secretly in love with one of Domville’s squires.

Before the marriage could take place, two deaths occur and Cadfael uses his position and his past to help discover a murderer, absolve an innocent man, uncover a mystery, and unite two lovers.

The Leper of Saint Giles is a satisfying mystery and a tale of treachery with the unique twists and turns that are the hallmark of Ellis Peters.

The Virgin in the Ice is the sixth chronicle in the Cadfael series and was written in 1982. This book reveals a piece of Cadfael’s past that should be read before going on to subsequent books. I won’t say too much about this book but it could almost be called a thriller. 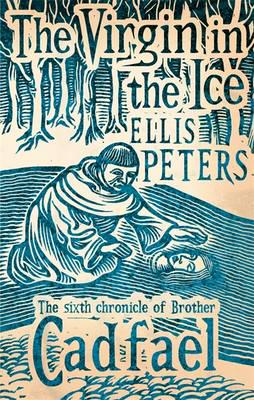 In the year 1139 King Stephen is on the throne but his cousin, Empress Maude, daughter of Henry I, has an equal claim to the throne. A civil war (the Anarchy) results and refugees have fled from Worcester, the scene of the latest conflict.

Among the refugees are a boy of thirteen, his seventeen year old sister, and a young Benedictine nun. They were known to have been seeking refuge at Shrewsbury Abbey where Brother Cadfael resides but they fail to arrive. A monk of Cadfael’s order is found near death from wounds inflicted by persons unknown and Brother Cadfael is drawn into both mysteries.

This is a gripping book with many false trails and intertwining plots. I thought there was just a wee bit of contrivance and overdone coincidence towards the end but Ellis Peters can get away with it. Her descriptive writing is a pleasure to read and her ability to draw the reader into the wintery, bleak atmosphere of the England of Mediaeval times adds to the appeal of these books.

As Cadfael reflects on his younger days and his time as a soldier in the Holy Land twenty-six years earlier he observes,

‘In a land at war with itself…you may take it as certain that order breaks down, and savagery breaks out.’

The Virgin in the Ice covers a brutal period of English history and portrays the hardships that fall upon the common people when leadership forgets them. ‘…where royal kinsfolk are tearing each other for a crown, lesser men will ride the time for their own gain, without scruple or mercy.’

16 thoughts on “The Brother Cadfael Series by Ellis Peters”