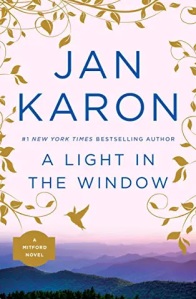 A Light in the Window is the second book in Jan Karon’s beloved Mitford series. At Home in Mitford introduced Father Tim, Mitford’s rector and lifelong bachelor, and this book continues developing the characters and relationships that were introduced there.

Father Tim’s relationship with his delightful neighbour, Cynthia, is getting more serious but there are some complications that arise, one of them being a wealthy and manipulative widow who has her eyes on the poor rector and seeks to beguile him with her gourmet cooking. An Irish cousin turns up unexpectedly, plants her uninvited self firmly in place, and proceeds to behave very strangely. Then there is Father Tim’s own personal struggles as he wrestles with his future and contemplates the words of C.S.Lewis, “We are not necessarily doubting that God will do the best for us; we are wondering how painful the best will turn out to be.”

‘In all the years of his priesthood, he had pastored the need of others. Now, he found himself pastoring others to meet his own needs.’

‘He believed he had never married because he was married to his calling. The truth was, he had a complete lack of the equipment demanded for truly loving.’

There is much humour scattered through this book even as it deals with serious issues. I enjoyed reading about the interactions in a small country town, the way the author deals with the ordinariness of life, its ups and downs, its hopes and disappointments, and the daily living out of a life of faith.

An aspect of this book that I liked is that Cynthia sees past the exterior of a man who is a bit overweight and has recently been diagnosed with diabetes, to see someone who is worth getting to know. She bypasses Andrew Gregory, a suave, articulate man-about town and chooses the unlikely Father Tim instead. It takes a while for Father Tim to realise this!

‘Diabetes was the sorriest of infirmities to drag to a dinner party.’

‘What was he, after all, when you came down to it, but a country parson? Not tall and trim and debonair like Andrew Gregory, who owned a closetful of cashmere jackets, could speak Italian, French, and a bit of Russian, and drove a Mercedes the size of a German tank.’

I’m looking forward to slowly reading my way through this refreshing and gentle series of fourteen books.