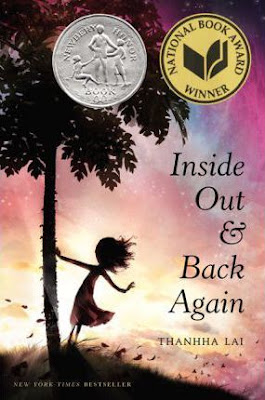 Inside Out & Back Again is the chronicle of  a ten year old Vietnamese girl during 1975. Hà, her mother and her three older brothers live in Saigon. Her parents had come south just before the borders between North and South Vietnam had closed. Her father had been in the navy and was captured by the Communists while on a mission. It wasn’t known if he was dead or alive.
One day their father’s best friend, Uncle Son, visited them and said he could get them out of the country. The alley outside their back door would allow them to bypass the navy checkpoint and give them access to the port.

\’I will not risk
fleeing with my children
on a rickety boat.

Would a navy ship
meet your approval?

As if the navy
would abandon its country?

There won’t be a South Vietnam
left to abandon.

You really believe
we can leave?

When the time comes,
this house is our bridge
to the sea.\’

Two of Hà’s brothers don’t want to leave the country but their mother had lived in the North. She knew that her son at college would eventually be asked to leave; her younger son would come home from school chanting the slogans of Hồ Chí Minh and be rewarded for reporting everything that was said in the home to his teacher.

The family destroyed everything at home that could be used as evidence against their father and taking only necessary items, they boarded a ship. Two weeks later while they were at sea, there was a formal lowering of their flag as the commander announced that South Vietnam no longer existed.

Although Inside Out & Back Again is a work of fiction, it is based on the author’s own experience as a Vietnamese refugee. It is written in free form verse in short, crisp, ‘visual’ phrases which reflect the sound of the Vietnamese language. (Hà would have been thinking in Vietnamese and not English.)
I think the free verse works very well for this book. My teacher daughter gave me this book to read and said that she read it aloud to her 6th Grade class at school when studying immigration. The family in this book eventually settled in Alabama in the USA, as did the author, but their experiences, in many ways, mirror those of refugees who came to Australia.
Here are some ideas my daughter used with this book:

*  Discussed what it would be like to view things that are normal to us from the perspective of someone seeing them for the first time (took photos of the classroom, what do you think your first impression would be?)

*  Annotated poems from the book

*  Wrote our own free verse poems

*  Looked at the history – push and pull factors of migration

*  Discussed racism and how people often treat people who are unfamiliar or “other” badly or dismiss them as inferior. How does this affect the main characters experiences? How might her experiences have been different without these attitudes?

Inside Out & Back Again was a 2012 Newbery Honor Book and is a very accessible book for younger readers to introduce them to the Vietnam War, immigration and free form poetry. Recommended for ages 9 to 12 years of age but interesting for older readers also.