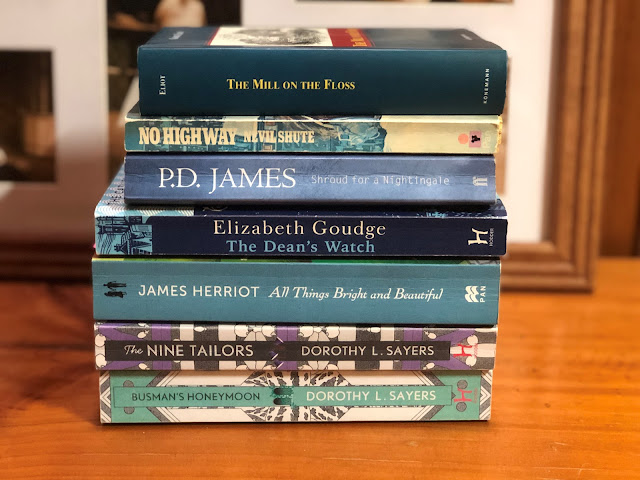 The Mill on the Floss is the story of the imaginative, temperamental Maggie Tulliver and her practical and unsympathetic brother, Tom. Their father muddles through life, honest but also ignorant and belligerent. His poor judgement leads to destitution and great emotional pain for his wife and children.

‘Certain seeds which are required to find a nidus for themselves under unfavorable circumstances have been supplied by nature with an apparatus of hooks, so that they will get a hold on very unreceptive surfaces. The spiritual seed which had been scattered over Mr. Tulliver had apparently been destitute of any corresponding provision, and had slipped off to the winds again, from a total absence of hooks.’

‘Mrs. Tulliver was what is called a good-tempered person – never cried, when she was a baby, on any slighter ground than hunger and pins; and from the cradle upward had been healthy, fair, plump, and dull-witted; in short, the flower of her family for beauty and amiability. But milk and mildness are not the best things for keeping, and when they turn only a little sour, they may disagree with young stomachs seriously.’

I really appreciated Eliot’s evocative descriptions of the joys and pains of childhood, her detailed descriptions, and the deep Christian themes she wove into this story. Considering that the author rejected Christianity as a young woman, her writing suggests that some of the seeds that were sown when she was younger still clung to the hooks and she never quite got rid of them.
A tragic story with a tragic end.

The Dean’s Watch is beautifully written and incorporates themes of service, sacrificial love and redemption in an interesting and poignant story.
The Dean is a misunderstood man. He is thought to be proud and unapproachable but in reality he is extremely shy. He is married to a beautiful woman who is selfish and distant. He loves her dearly but his love is not reciprocated.
When he encounters Isaac the watchmaker, a crusty old fellow, the two strike up an unusual friendship which changes both of them. There are various other characters in this multilayered book. One of my favourites was the elderly Miss Montague.
At one point she was reflecting on her adolescence and thought back to the moment when she realised she’d been living in a dream world. Crippled by an accident as a youngster and neglected emotionally by her parents who were vaguely ashamed at having produced so unattractive a child, she knew back then that she would never marry and being a gentlewoman, a career was not open to her. What should she do?

\’She never knew what put it into her head that she, unloved, should love. Religion for her parents, and therefore for their children, was not much more than a formality and it had not occurred to her to pray about her problem, and yet from somewhere this idea came as though in answer to her question…Could mere living be a life’s work? Could it be a career like marriage or nursing the sick or going on the stage?…So she took a vow to love.\’

This is a lovely book and my 14 year old daughter really enjoyed it too.

Mr Honey, an overlooked but brilliant scientist, is working on fatigue in aircraft structures. The story is narrated by Dr Scott, Honey’s new boss. Scott initially judges the man by his ugly, dishevelled appearance, eccentric behaviour and bizarre interests, but finds that there’s much more to him than meets the eye.
Honey has a theory that the tail of the plane he’s been testing will crack from fatigue after a certain number of flying hours but he hasn’t proved anything yet. However, on a work flight over the Atlantic he discovers that the plane he is on is the same Reindeer model that he is performing his tests on. He is interested but not alarmed until he discovers that somehow the plane has been allowed to fly hours over his estimate where fatigue would be likely to occur.
He raises an alarm with the crew but they basically think he’s crazy so when the flight makes a short stopover he uses the opportunity to put a spanner in the works, so to speak.

As usual, Nevil Shute takes an unlikely person, fills in all their little details, and makes them the centre of the story. Shute is probably the only writer I know who is able to incorporate technical detail (he was an engineer) and not lose the non-technical reader who prefers a character-driven plot  (e.g. moi) in the process. His characterisations are so well done and people such as the unlikeable Honey become characters we sympathise and identify with in Shute’s hands. Unlike many of his other books, this one has a rather happy ending!

A little quote I liked was when Dr Scott was asked what he thought of Mr Honey after he threw the spanner in the works (metaphorically speaking). Scott’s reply was:

“I think exactly as I did…I think that there’s a very fair chance that he’s right about the Reindeer tail. I think he has a very logical mind. The fact that his interests spread very wide doesn’t mean he’s mad. It means that he’s sane.”

The title of this book is a clever little play on words. James has set this story in a teaching hospital and I think she captures the atmosphere of the hospital system really well, even if it differs in detail  from a more modern setting.
The plot is cleverly convoluted with twists and turns; multiple murders occur and suspicion changes from one person to another.
As I’ve said numerous times before, P.D. James has a wonderful literary style. Her life experience obviously contributed to her knowledge of human nature but I often get the sense that the only person she has genuine regard for is her Chief Inspector Superintendent Adam Dalgliesh. Everyone else in her novels degenerate into nasty specimens of humanity and the reader doesn’t get into sympathy with any of them, although there were one or two characters in this book who had some redeeming qualities.
There\’s a good amount of tension with some dramatic events and the ending was completely unexpected. A good read, especially for anyone who has worked in a hospital setting.

Lord Peter Wimsey and Harriet Vane are married at last and set off to a quiet country house for their honeymoon.
The story starts off with extracts from the diary of the Dowager Duchess of Denver (aka Lord Peter Wimsey’s mother) and they are just delightful. She goes over some of the details of the development of the relationship between the two lovers and puts in her own funny little interjections.
It continues with snippets of gossip about the wedding from a variety of sources such as a letter written by Lord Peter’s nasty sister-in-law, Helen, who in writing to her friend observed:

‘Peter was as white as a sheet; I thought he was going to be sick. Probably he was realising what he had let himself in for. Nobody can say that I did not do my best to open his eyes. They were married in the old, coarse Prayer-book form, and the bride said ‘Obey’ – I take this to be their idea of humour, for she looks as obstinate as a mule.’

Unsurprisingly, Lord Peter and Harriet’s married life is inaugurated with a murder. The cosy cottage that Peter bought for Harriet and where they went to spend their honeymoon turns out to be not so cosy after all when the body of the previous owner is found in the cellar.
Busman’s Honeymoon is a combination of a detective novel and a romance and is an enjoyable conclusion to the long-running and tumultuous relationship between the two protagonists.

Harriet said: ‘I have married England.’

Wimsey said: ‘We’ve got to laugh or break our hearts in this damnable world.’

This was a re-read for me but I’d read it so long ago that I’d forgotten many of the details.
Sayers wrote this novel after Strong Poison (where she introduces Harriet Vane) and Have His Carcase (where they work on solving a crime together) and it comes just before Gaudy Night which also features Vane. However, The Nine Tailors has no mention of Wimsey’s relationship with her.
I’ve really enjoyed the Wimsey & Vane novels and thought I might be disappointed going back to Wimsey on his own but I have to say, I found it quite refreshing. It gave Sayers the opportunity to delve into the personalities of the very engaging characters in this story and to concentrate her efforts on an intricate and baffling murder mystery.

The Nine Tailors is set in the remote fen country of East Anglia. It is an original and very clever detective story centred around a church, its practice of the ancient craft of bell-ringing and a twenty-year old unsolved crime. ‘Nine Tailors\’ refers to the nine strokes which start the toll to announce to the villagers that a man has died.

‘The art of change ringing is peculiar to the English, and, like most English peculiarities, unintelligible to the rest of the world. To the musical Belgian, for example, it appears that the proper thing to do with a carefully tuned ring of bells is to play a tune upon it. By the English campanologist, the playing of tunes is considered to be a childish game, only fit for foreigners; the proper use of bells is to work out mathematical permutations and combinations.’

This is the second volume of memoirs written by James Herriot and contains Let Sleeping Vets Lie and Vet in Harness.
James is now married to Helen, a farmer’s daughter, and they live in the little Yorkshire village of Darrowby. Its the 1930’s, Britain is on the verge of World War 2, and veterinary science is still in the dark ages in many respects.
I’ve loved these memoirs which started with All Creatures Great and Small where Herriot begins his practice in Yorkshire after his training in Glasgow. By the end of the first memoir, James and Helen were married and spent an unorthodox honeymoon carrying out tuberculin-testing. In this second memoir, they have settled into life as a married couple and James is in partnership with his former boss, Siegfried Farnon, in the veterinary practice in Darrowby.
The author is so good at combing humour and pathos in his writing. I’d be laughing at something hilarious in one chapter and in the next I’d be close to tears.
These memoirs are a window into a way of life that has passed and are great books to read aloud.

\’There\’s another lamb in here,\’ I said. \’It\’s laid wrong or it would have been born with its mate this afternoon.\’
Even as I spoke my fingers had righted the presentation and I drew the little creature gently out and deposited him on the grass. I hadn\’t expected him to be alive after his delayed entry but as he made contact with the cold ground his limbs gave a convulsive twitch and almost immediately I felt his ribs heaving under my hand.
For a moment I forgot the knife-like wind in the thrill which I always found in new life, the thrill that was always fresh, always warm.