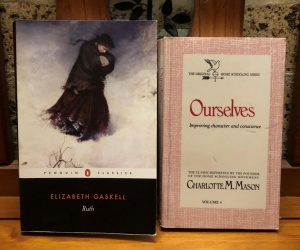 Ruth, Elizabeth Gaskell’s second book, was published in 1853 and is the surprisingly compassionate portrayal of a ‘fallen woman.’ It contains elements that remind me of several books I’ve read:
The Scarlet Letter (1850) with its religious hypocrisy; Tess of the d\’Urbervilles (1891), in that a naïve & vulnerable young woman is pressured into a situation, (I nearly gave up on reading Thomas Hardy after this depressingly fatalistic story) and Jane Eyre (1847), where a family opens its heart to someone completely destitute. But Ruth stands alone with its redemptive and thoroughly Christian themes of suffering, hope, and restoration. It also raises the question of whether promoting a falsehood in order to protect an innocent person is justified.

Ruth Hilton is a strikingly beautiful 16 year old orphan serving an apprenticeship as a seamstress when she meets the well-off young gentleman, Henry Bellingham. Struck by her innocence and beauty, Bellingham befriends Ruth but when she loses her position as seamstress and is turned out of her home, he uses this to his advantage and persuades her to go to London with him. From there they travel to a Welsh inn where they live together.
After a while Bellingham falls ill. The landlady writes to his mother and she comes to take him back home leaving Ruth abandoned.

In a sense, the essence of the story really begins from this point. Ruth is taken in by the Bensons, a Dissenting minister and his unmarried sister, who show true Christian charity, even when they discover that Ruth is expecting Bellingham’s child.

‘In the Bensons’ house there was the same unconsciousness of individual merit, the same absence of introspection and analysis of motive, as there had been in her mother; but it seemed that their lives were pure and good, not merely from a lovely and beautiful nature, but from some law, the obedience to which was, of itself, harmonious peace, and which governed them almost implicitly, and with as little questioning on their part, as the glorious stars which haste not, rest not, in their eternal obedience. This household had many failings: they were but human, and, with all their loving desire to bring their lives into harmony with the will of God, they often erred and fell short; but, somehow, the very errors and faults of one individual served to call out higher excellences in another, and so they reacted upon each other, and the result of short discords was exceeding harmony and peace. But they had themselves no idea of the real state of things; they did not trouble themselves with marking their progress by self-examination…’

Ruth gives birth to a son whom she names Leonard and is devoted to him. Aware of her lack of education and general life skills, she takes on some of the household duties and seeks to better herself intellectually. As she invests herself caring for others and nurturing her soul, she finds herself changing:

‘But the strange change was in Ruth herself. She was conscious of it though she could not define it, and did not dwell upon it. Life had become significant and full of duty to her. She delighted in the exercise of her intellectual powers, and liked the idea of the infinite amount of which she was ignorant; for it was a grand pleasure to learn – to crave, and be satisfied.’

Mr. Benson is shown in sharp contrast to one of his parishioners, the wealthy Mr. Bradshaw, a self-righteous, legalistic, domineering man who, believing Ruth to be a widow, employs her as a governess for his children.

‘…every moral error or delinquency came under his unsparing comment. Stained by no vice himself, either in his own eyes or in that of any human being who cared to judge him, having nicely and wisely proportioned and adapted his means to his ends, he could afford to speak and act with a severity which was almost sanctimonious in its ostentation of thankfulness as to himself. Not a misfortune or a sin was brought to light but Mr. Bradshaw could trace it to its cause in some former mode of action, which he had long ago foretold would lead to shame. If another’s son turned out wild or bad, Mr. Bradshaw had little sympathy; it might have been prevented by a stricter rule, or more religious life at home…’

Mr. Bradshaw dreaded all intimacies for his eldest son, Richard. He never allowed him to ask a friend home and taught him to avoid any society beyond his own family. Richard eventually caused grief for his father and Mr. Benson made this insightful observation about him:

‘He will never be a hero of virtue, for his education has drained him of all moral courage.’

Now that’s something to ponder!

Bellingham enters Ruth’s life again about ten years later. Since becoming a mother, all her love and care had been poured into her son. The Bensons had protected her child from the beginning and kept his illegitimate birth a secret but now Bellingham presented Ruth with an agonising choice. Mr. Benson spoke into her situation with these words:

‘The world is not everything, Ruth; nor is the want of men’s good opinion and esteem the highest need which man has. Teach Leonard this. You would not wish his life to be one summer’s day. You dared not make it so, if you had the power.’

Elizabeth Gaskell had been overlooked in the early twentieth century but in the past thirty years her work has attracted more attention. It’s interesting that the British educator, Charlotte Mason, herself an overlooked figure of the early twentieth century, included a chapter about Ruth in Book 2 of Ourselves, a volume written for the moral training of young people aged 16 years and over. She calls the story, ‘the history of a seduction,’ and makes this important observation, among others:

‘People say it is one of the crying injustices of society that the woman should suffer and the man go ‘scot-free.’ But does he?
The confirmed profligate, perhaps, is not capable of further degradation; but the man who falls for the first time loses his future as certainly as the woman, if less obviously. He may escape public disgrace, but he never gets over the loss of power, purpose, and integrity which accompanies the loss of purity. He is handicapped for life, though he may himself have forgotten why; and should he at last marry, his children too often repeat their father’s sin.’

And Gaskell does make this handicap obvious in Bellingham’s life. Ruth rises and redeems herself. She grows in character and strength while he is thwarted in everything he does. Self-indulgence from his youth paved the way for his demise.

“…the thwarting resulting from over-anxiety: the indiscreet indulgence arising from a love centred in one object – had been exaggerated in his education.” In these few words the author gives us a key to the situation, and we begin to suspect what is to follow.

He is a pathetic figure in the end.

Linking to Books & Chocolate for the 2019 Back to the Classics Challenge: 19th Century Classic