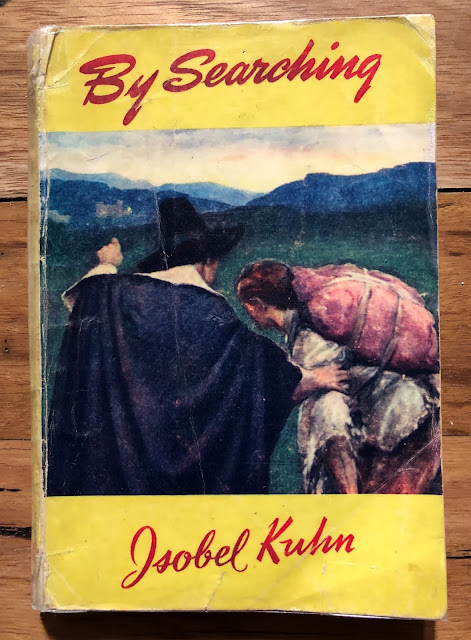 Isobel Kuhn and her husband, John spent twenty years working amongst the Lisu tribe, a minority people group, in South-West China. The Communist occupation of China forced them to leave China in 1950 and to enter Thailand to work with the Lisu people there.
Isobel wrote about her experiences with the Lisu people and the Communist take over in some of her other books: Ascent to the Tribes, Nests Above the Abyss, and In the Arena. By Searching is the story of her girlhood and the years before her marriage up until she sailed for China in 1928.

Isobel was brought up in an ‘earnest Presbyterian home,’ and had been carefully prepared by her parents to refute modernism before she was allowed to enter university. However, she had a crisis of faith after a highly regarded university professor told his students that the only reason they believed in God, Heaven and Hell, was because their parents brought them up that way.

‘Our twentieth century believed only when there was a test and a proof. We were scientific in our investigations; we did not swallow the superstitions of our ancestors just because
they were handed to us.’

Although she understood the conflicting claims of modernity and fundamentalism, Isobel was unprepared to explain why she believed what she did. She came to the conclusion that she would accept no theories of life which she had not proved personally:

And, quite ignorant of where that attitude would lead me, I had unconsciously stepped off the High Way where man walks with his face lifted Godward and the pure, piney scents of the Heights call him upward, on to ‘the misty flats.’ The in-between level place of easy-going; nothing very good attempted, yet nothing bad either; where men walk in the mist telling each other that no one can see these things clearly. The misty flats where the in-between drift to and fro; life has no end but amusement and no purpose; where the herd drift with the strongest pull and there is no reason for opposing anything. Therefore they had a kind of peace and a mutual link which they call tolerance.

This is a great book for Christian young people as the author is honest and transparent about her life during her time on the ‘misty flats.\’  By rejecting the foundation laid in her life as a child, she had no objective standard for truth and no basis for making the right choices. She describes her struggles with relationships, including a broken engagement with a young man who has no intention of remaining faithful once they were married. Her weaknesses, financial difficulties, and her search for a purpose to her life are winsomely described, as is her quest to find God by seeking Him with all her heart. Her abandonment of her childhood faith was especially painful for her father. To those parents who are going through this with their own child, Isobel\’s journey would be an encouragement that a parent\’s prayers are not only important, but effective.

One of the memorable incidents in the book occurred when the author was twenty years of age. She had just broken up with her fiancée, had trouble sleeping and her father was concerned for her. One night he knelt by her bed and prayed to God to help her but it just irritated her:

“Thanks, Dad,” I said wearily, “I know you mean well, but it doesn’t go beyond the ceiling, you know,” and I never forgot the groan with which he turned from my agnosticism and left the room.

One night, not long after this episode, she describes how ‘the Tempter came’ and convinced her that life had no purpose and she might as well slip out of it. She was on her way to the bathroom to ingest a poison when she heard her Dad moan in his sleep and she was startled into remembering how much he loved her and how devastated he’d be if she committed suicide:

In agony I turned and sat down on the edge of my bed and faced the darkest moment of my life. I didn’t want to live and I couldn’t die!

Interestingly, the professor who had ‘first pushed her off the High Way\’ had given his students an essay to study which included quotations of poetry from the classics. One of these was from Dante which was written in Latin. Isobel had studied Latin and translated it as ‘In His will is our peace.’

Now that sentence wrote itself across the dark of my bedroom. Dante believed in God. What if there were a God, after all? If so, I certainly had not been in His will. Maybe that was why I had no peace?

And so her search for God began.

I read this book as a fairly new Christian and I was very impressed with the author’s candid way of writing. Simply told but profound in many ways, it hasn’t lost its relevance in the sixty years since it was written. I’d recommend it for about age 14/15 years and up. I\’m using it in Term 2 of Ambleside Online Year 8. Update: I decided to leave it until Year 10, which is this year (2020) and it\’s been a good fit for my 15 yr old daughter.
A true Christian classic.