The Bight is one of seven titles in the Australian Conservation Series. Three other books in the series were also written by Colin Thiele: Coroong, Range Without Man, and The Little Desert.
It is is a unique book that was published in 1976, just after the new highway across the Nullarbor was completed, and it looks at a magnificent part of Australia, the Great Australian Bight, which straddles the coasts of South Australia and Western Australia.

Although there are only 56 pages in this book, including photographs, it manages to convey the history, the geography, and the wonder of this magnificent area.
Thiele points out that this part of Australia has a very striking history. From Pieter Nuyts’ voyage in the Gulde Zeepaert along the coastline in 1627, followed 160 years later by Vancouver, D’Entrecasteaux, and then Matthew Flinders who completed the map of the South Land in the 19th Century. It was Flinders who named a prominent cliff face Point Culver which was to be Edward John Eyre’s goal forty years later when he decided to force a passage to the Head of the Bight.

Of the sagas of the Bight Eyre’s dominates all the others. There is a poetic quality about its magnitude and starkness and seeming futility and grandeur. Though taken from real life there are elements in it that are larger than life – the unwavering hostility of the land, the vastness of distance, the enormity of the task, the obduracy of the human will. It is a story that deserved its happy ending.

About twenty to thirty kilometres north of the coast is the Nullarbor, which Thiele describes as ‘a level sea of limestone.’ The explorer Alfred Delisser dubbed it “Nullus-Arbor” on account if its treelessness – a Latin title and not an Aboriginal one as it is often believed to be. Some parts of the Nullarbor are riddled with vast hollow chambers and sinkholes that provide homes and a respite from the heat of summer for a variety of creatures such as cave owls, swallows and kestrels. 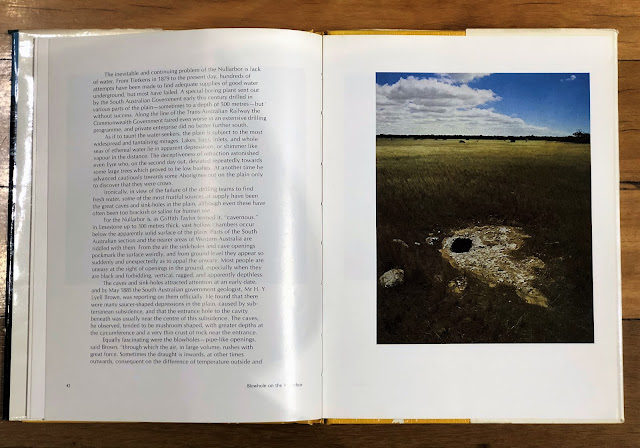 In the 1870’s and 1880’s, surveyors, telegraph linesmen and prospectors made their mark in the area, followed by men who built their sheep stations in places like Yalata and Koonalda. Now there are only a handful of sheep, solitude and distance.
The inland area of the Nullarbor was opened up by the Railway and then in the mid-1970’s the Eyre Highway was bituminised all the way from Western Australia to South Australia.
My parents made the trip from Whyalla in South Australia to Perth in Western Australia with five kids, my granny, and various household appliances crammed into a van in the early 1970’s when a good part of the road was still unsealed. I have memories of a very long, straight drive across the Nullarbor Plain, a vast blue sky and not much else. There was very little traffic and when we did see any other travellers it was very exciting and there was a great deal of tooting & waving. We’d stop for the night by the side of the road, light a fire and spend the night there. There were kangaroos and other animals that came out after dark to make night driving too hazardous.
We felt like pioneers.

The completion of the highway was hailed as the dawn of a new era. It was more than that. It was the end of something as deep and old as the roots of the nation; the end of challenge, demand, discomfort, and the stimulus of the unexpected. It was symbolic of conformity and uniformity…
With the old road there was still the possibility of the unexpected; of delay, breakdown, and improvisation; of ambush by bull dust; of plans frustrated and timetables destroyed…

There was opportunity for humility and succour and gratitude and imagination, of being forced to camp out under the stars, of having to make plans about food and fuel and water, of thinking ahead, developing self-reliance, appreciating distance, and doing all those things that are good fair the soul and character of man.

There is something very humbling about getting out of your puny vehicle, standing in the red dust, looking around at 360 degrees of low saltbush, seeing no other humans for a space of time and realizing your absolute smallness in the scheme of things. I\’ve been thinking about this quite a lot lately as it\’s been a while since I\’ve experienced this and I\’m feeling a desire to do so again.

Yet there should also be cause for hope, not merely in the value of the highway for trade or travel or defence, but because, coming close to the cliffs of the Bight in isolated places, it gives scope for the human spirit. For who could stand on those ramparts and not be aware of what has gone before, of humanity\’s diminutiveness in the scheme of things. Who, in his mind’s eye, could not see again the 350-Year-old temerity of the Gulde Zeepaert, the meticulousness of Flinders, the incredible tenacity of Eyre…this is still the untamed country. Move the traveller a kilometre or two away from the highway, and the age-old verities of the region hold him fast.

This is a beautifully written Australian living book that I’m using in Term 1 of the Ambleside Online Year 8 curriculum in place of the Christopher Columbus selection. It also covers some Australian history of exploration and natural history as well as geography.
It\’s out of print but available for a reasonable price second-hand.