D’Arcy Niland (1917-1967) was an Australian author who is probably best known for his classic book, The Shiralee, although he also wrote over five hundred short stories.
The Shiralee was a best-seller both in Australia and overseas and has never been out of print since it was first published in 1955.
Now that I’ve read it I’m not surprised at its success. It is a raw story of fatherhood, rejection, betrayal, and the human heart’s response to these. The author was in his teens during the Great Depression and although the time period of the story isn’t directly referenced, the setting seems to be during or around that time. 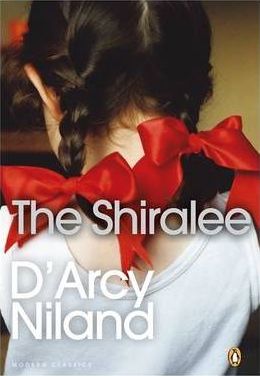 Macauley was a swagman (a labourer who walked his way from job to job, carrying a swag which contained his bedding and all his belongings) and he worked all over New South Wales. He had been married for five years and his wife and their three and a half year old daughter lived in the city while he worked in country towns or in the outback.
One day he returned home unexpectedly and found his wife with another man. In his rage, he beat up the interloper, grabbed Buster, his daughter, and made his way out on the road again.
Six months later he is still on the road and resentful that he is lumbered with his shiralee, his swag, the burden that he took on himself to spite his wife.

He had had no word from his wife since that time but she turned up in a town where he was working and tried to take Buster back to the city. Her plan was one of revenge. She didn’t want to be lumbered with the child and planned to get back at her ex-husband by putting her daughter into an orphanage without his knowledge. Macauley discovered she had taken the child and took her back but he was unaware of her real intention at that time.

Macauley began to realise just how attached he had become to his little girl. This burden that he had to carry with him had compelled him to consider someone else besides himself. Begrudgingly he had had to adapt himself to a little person’s needs and in so doing he had become tethered. The swag that felt like a burden in the heat of the day, became a shelter at the end of it. And now he could not bear to be parted from her.

This book is unusual in its depiction of a single father. I know its extremely difficult for anyone in a single parent situation, but in the few instances I’ve known where the father is the solo parent, it seems doubly hard.
Macauley found it almost impossible to get suitable work. He was considered to be incompetent to raise a child, especially a female one. The type of work he did, the sort of people he associated with, the conditions of travelling on the road, were all considered totally unsuitable for a child.

Macauley wasn’t the most likeable sort of fellow when first encountered in this book. He lived by his fists and acted before he thought, if he thought at all. Thinking only brought him the pain of memory. He was aggressive, surly, and had a devil-may-care attitude. There were a few flashbacks to his own childhood and they were not pretty, but they helped to reveal how the man had become who he was. He had entered his marriage wanting the woman but not the life. He had no great love for his daughter and only took her with him to get back at his wife, not knowing that his wife didn’t want to be burdened with a child.

The developing relationship between father and daughter is poignantly portrayed but without sentimentality. Niland’s writing is terse, real and downright moving at times. He takes a total jerk, gets between the chinks of his armour and his angry exterior, takes him through a refining fire and reveals his humanity and heart.

Life on the road was also shown in its highs and lows. There were some dangerous and nasty characters but there were also others who would stand with you in trouble and still others who would lay down their lives for a friend.

There are no chapter breaks in this book of 257 pages, but apart from the temptation to keep reading because there were no enforced breaks, it didn’t bother me.
Niland uses colloquialisms and Australian slang, some of them outdated now, that may be a hindrance to some readers – but then maybe not, judging by the international appeal of the book.
Parts of the book may cause offence to some readers . Macauley has many negative things to say about women, police, and Aboriginals, for example. But then, he is angry at just about everyone, even his own child, and has a basic distrust of people in general. However, I think the author has written honestly about the life of an itinerant worker in the early 1900’s in Australia. It wasn’t an easy life and it was a very different generation that had been through an atrocious world war and a world-wide depression. I appreciate books that honestly depict a time period without trying to impose a more modern worldview upon it.

The Shiralee is a true Australian classic but is definitely for a mature or adult audience.
D’Arcy Niland was married to the New Zealand author, Ruth Park, and they lived in Sydney where they raised their five children. She wrote a ballad, an extract of which I found in my copy of The Shiralee pictured above:

The swagman crawls across the plain;
The drought it prowls beside him,
A hundred miles from rim to rim,
And a shadow-stick to guide him.
The crow speaks from the broken branch,
And he replies, delirious;
But in the dark he drinks the dew,
Beneath the stare of Sirius,
And from his shoulder drops the swag,
The shiralee, the tether,
That through the cruel, stumbling day,
Drove all his bones together.
The load too heavy to be borne –
He cursed it in the swelter,
But now unrolls with humble hands
And lies within its shelter.
From \’The Ballad of the Shiralee’ by Ruth Park

If you scroll down this page, there are some lovely photos of Niland with his twin daughters and his wife.

9 thoughts on “An Australian Classic: The Shiralee by D’Arcy Niland (1955)”