Year 7 has finished up for the seventh time in our home, although this was only the second time we’ve used Ambleside Online for Year 7.  As I usually do, I asked my daughter which books were her favourites from this year’s work, but I gave her a limit of ten. These are the books she chose: 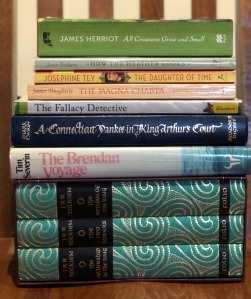 I read aloud The Brendan Voyage, The Daughter of Time, and All Creatures Great and Small (which we are only half way through. It’s an omnibus edition and isn’t scheduled in AO year 7.) She read the others on her own. The Magna Carta was a book we had that I added in – she really enjoyed this. The Daughter of Time and Fallacy Detective sparked a lot of interest, conversation, and  ‘that’s a red herring’ type of comment on a regular basis!

As I mentioned, this is the second time we’ve done AO Year 7, and when I asked my next child up, Benj, who did Year 7 in 2014, what books were highlights for him. These are the books he chose:

They almost have opposite tastes in reading. Ivanhoe, Watership Down, and Eric Sloanes Weather Book were not among Moozle’s favourites and she still hasn’t read The Talisman because she says she does not like Sir Walter Scott. Actually The Talisman was everyone else’s favourite Scott novel.
Moozle loved the science selections but Eric Sloane’s Weather Book went above her head at times – it was one of Benj’s favourites. He didn’t care for The Life of the Spider by Fabre (we have the Sydney Funnel Web, Atrax robustus, one of the world’s deadliest spiders in our area so that probably didn’t help) but Moozle got right into it and just about every reading was accompanied by a science journal entry.
However, they both loved The Lord of the Rings trilogy!

This verse from Ecclesiastes, that Charlotte Mason quotes in Volume 6, is very apt:

‘In the morning sow your seed, and at evening withhold not your hand, for you do not know which will prosper, this or that, or whether both alike will be good.’
Ecclesiastes 11:6

One child may imbibe certain ideas from a book, while a different child won’t, but we can’t predict what ideas will inspire them. Our job is to provide a wide variety of books the same way we would provide food for a scrumptious smorgasbord. I’ve been quite surprised at some of the books that have been the trigger for ideas; books that I wouldn’t have expected to charm them, but they have. Having children who’ve had almost opposite reactions to books has made this observation even more apparent to me:

Education is a life. That life is sustained on ideas. Ideas are of spiritual origin…we must sustain a child’s inner life with ideas as we sustain his body with food. Probably he will reject nine-tenths of the ideas we offer, as he makes use of only a small proportion of his bodily food, rejecting the rest. He is an eclectic; he may choose this or that; our business is to supply him with due abundance and variety and his to take what he needs…out of a whole big book he may not get more than half a dozen of those ideas upon which his spirit thrives; and they come in unexpected places and unrecognised forms…

A Philosophy of Education, Pg. 109
I don’t think a child has to love a book. They might find it difficult, and we may be tempted to drop it, but there needs to be some books that make them work a bit harder, build some more muscle, or they won’t grow. It’s not a cruel & unusual punishment to require them to persevere.
Many children are fussy eaters but we don’t allow them to just eat junk because that’s what they like & it will help avoid conflict for us if we just give them what they desire. If a child is sick or is convalescing, we make allowances by giving them the food they desire, within reason, but a well and healthy child doesn’t get the same treatment.
A child may not be ready for some of the ideas presented in a book, but they will seize some of them while others may give them a foretaste that could develop at a later time. Smoked salmon, haloumi, and blue vein cheese might be passed over for other better known foods the first or second time around, but then one day they decide to try them and find they are very moreish. The other thing we need to consider is if overall the material is at a suitable level for them. If every book is difficult, perhaps we need to rethink our choice of books or grade level.
Something I’ve made a point of doing this last year is to stretch Moozle’s reading so that she’s just not reading books with lots of action. She is a good reader but doesn’t like slow books. A couple of those books I’ve mentioned towards the end of this post.
Other Highlights From This Year
In my original plans for Moozle’s Year 7, I mentioned we were doing Apologias Anatomy & Physiology. We finished that and then continued with The Way We Work by David Macaulay. Moozle loves Macaulay’s illustrations in this book and I was surprised at how in depth the text is. 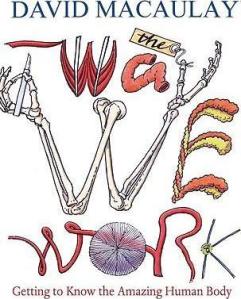 This section covered lipids and Macaulay used a number of technical terms that she wasn’t familiar with. I found a video on lipids to help out. We’ll be continuing with this book in Year 8.

When my children get to about 15 or 16 years of age, I have them do a Senior First Aid course. In the past I’ve organised this and opened it up to some other families with older children & it’s an intensive 2 day course. A few months ago, a homeschooling friend organised a course that ran over 4 weeks, one afternoon per week. Both Moozle and I did the course (a refresher for me) & I thought that spreading it out over a month was a good way to do it. There is so much information and doing it this way was much easier & left more time to let it all soak in. 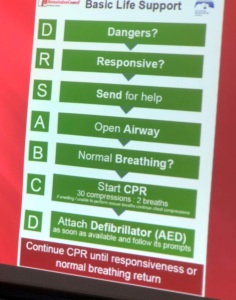 Another focus this year was on Natural History Illustration which I wrote about here.
Handicrafts – the past few months have been devoted to patchwork and quilting. This is her major project.
Cello – this year she’s preparing for the AMEB Grade 7 exam and has also had the opportunity to play in church a few times.
On the family front, the role of Aunty has come very naturally & she is a favourite with her little niece. We’re all looking forward to the birth of our son and his wife’s first child due in October and the wedding of our second daughter in September.
Some of Moozle’s reading this year:
The Refugees by Sir Arthur Conan Doyle – ‘Quite a good book but the main character behaved stupidly at times. Conan Doyle tends to make the Frenchmen excitable little wimps, while in books like this the Frenchmen always think the English are calm cool and collected, with no emotions whatsoever.’ 4 out of 5
Lorna Doone by R.D. Blackmore – scheduled in AO Year 8 as a free read. ‘It took ages to get into the book, rambled on at times, but it was a good story.’ 4 out of 5

The Spy by James Fenimore Cooper – set during the American Revolutionary War and written by an author who lived around that time period. This was Moozle’s first book by Cooper and she didn’t mind it, but I think she’ll appreciate some of his other books a bit more later on. 3 out of 5
Midwinter by John Buchan – a little different to his Richard Hannay series. Midwinter is a tale of the  Jacobite rising set in 1745. John Buchan always gets a good rap in our house. 4½ out of 5:
‘The Jacobite army marches on into England and Alastair Maclean, close confident of Charles Edward Stewart, embarks on a secret mission to raise support for the cause in the west. He soon begins to suspect someone close to the Prince is passing information to the Government, but just as he closes in on the traitor his own life is put in danger.’
The Black Stallion series by Walter Farley – this is a series that Moozle has enjoyed for a few years now and she added a couple more to her collection recently. 4½ out of 5.
I’ve been thinking about the next year’s work and my plan is to cover AO Years 8 & 9 over eighteen months. I have a couple of reasons for this. One is that the school year here in Australia goes from February to December with a fairly long break over Christmas. We’ve never followed the school terms but I’m finding more and more that our outside activities do. Just about everything shuts down for the school holidays and the Christmas break and we often end up catching up with people during the official school holidays. There’s also much less traffic at those times so it’s easier to get out and about.
The other reason is so that Moozle isn’t straddling two years – she started Year 7 in the middle of last year. At the end of next year she will have completed Year 9 and then she’ll start Year 10 at the beginning of the next year…if that makes sense!  Anyhow, that’s the plan & I’m looking at the AO schedule here – starting at Week 25, which will take us through to the end of the year. So instead of doing AO Years 7, 8, & 9 in two years, we’ll be doing Years 8 & 9 in one and a half years. Clear as mud?
Edited to add our weekly schedule. This is what I’ve done for many years – give the schedule out at the beginning of the week and let them decide which books to do each day. I check each day to see what’s been done and if I find they’ve gotten a bit lax, I’ll give them a list of things I’d like completed. Each of my children has had a preference for certain subjects so I make sure they haven’t left things out and if they have, get them to attend to it the first thing the next day.
They have all tended to like doing a book chapter in one hit & not spreading it out over a week – even the longer reads such as Churchill’s Histories. 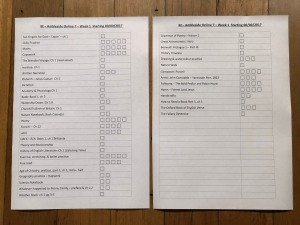 My original plan for Moozle’s Year 7 – I made some modifications especially with Devotional reading and Science.

Apart from what I mentioned in my original plans, Moozle read & re-read some Australian titles this year. Many of the books I want to use I’ve either used in earlier years or plan to use later on when she’s a little older. I picked up a couple of Nan Chauncy books we didn’t have, Tiger in the Bush & Tangara and she read those but they were easy for her.
The Silver Brumby series are some she re-read and enjoyed doing so. They are excellent reading.

I have a post where I record some of the Australian titles we’ve read and at what age/grade level.

My Homeschool has some options for Australian families that includes assistance for those needing to register with the government.