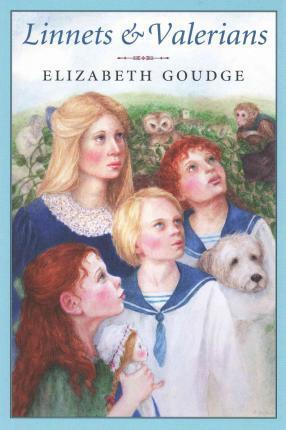 I had a mixed reaction to Linnets & Valerians, a children’s book by Elizabeth Goudge which was published in 1964. On the one hand, most of the characters in this book are attractive, well portrayed, and interesting. The storyline is involved and has plenty of appeal also but I was uncomfortable with how Goudge handled the magical side of the story as the book progressed. I think Goudge\’s writing is very endearing so I am genuinely sorry I can\’t recommend this book without reservation.

Four children, Nan, Robert, Timothy, Betsy, and their dog, Absolom, are left in the care of their grandmother when their father went off exploring in Egypt. The children were a bit too much for Grandma to handle, so she decided that Absolom must go and that Robert and Nan should be sent to boarding school while her companion, Miss Bolt (christened \’Thunderbolt\’ by the children) would teach Timothy and Betsy at home. The children did not want to be either educated nor separated from each other, and were determined to keep their dog. So they did what any child would want to do in that situation:

\’Escape. People always escaped from prison if they could. The question was, could they? Robert was ten years old, stocky and strong, and he had a penknife, green eyes and red hair, and when a question like this presented itself to his mind he did not ask it twice.\’

By coincidence, they ended up at the house of their eccentric bachelor uncle, their father’s elder brother. Although Uncle Ambrose was adamant that he did not like children, underneath he was a decent fellow. He had firm views about children and did not hold with boarding school for girls:

He agreed to let the children stay with him subject to certain conditions:

‘I intend to impose conditions upon your sojourn with me. You will keep them or go to your Uncle Edgar, who lives in Birmingham and will dislike you even more than I do myself…
I must tell you that I have a devouring passion, not for children themselves, for I abominate children, but for educating them…’

And so began their education in Greek, Latin, and Literature, with a good amount of free time thrown in if they completed their work.
The children’s mother had died five years previously and the children were close and trusted each other. Nan, responsible, steady, and sensitive, and twelve years of age. Being the eldest, she was of a domesticated turn of mind. She \’did not have many ideas of her own because it was she who had to deal with what happened after Robert had had his.\’
She also believed that ideas should be chewed on for twenty-four hours, whereas Robert was impulsive and full of ideas – especially about how to make money; Timothy and Betsy, both feisty and headstrong were aged eight and six respectively.
Although their uncle was a stern disciplinarian, he was a wonderful teacher and did genuinely love his charges. He recognised that Nan had a reflective temperament like himself so he gave her her own little parlour where she could go for privacy:

‘A parlour of her own! She had never even had a bedroom of her own, let alone a parlour…
Something inside her seemed to expand lie a flower opening and she sighed with relief. She had not know before that she liked to be alone. She sat still for ten minutes, making friends with her room, and then she got up and moved slowly around it, making friends with all it held.’

Goudge showed her knowledge of children and their needs in a sensitive, charming, and humorous manner throughout this book, but as I mentioned previously, I was uncomfortable with how she handled the magical aspects of the story. I don’t have an issue with magic per se, and our children have read Tolkien, Lewis, and other authors, some modern, whose books contain this element, not to mention fairy tales. In a fairy tale, there are consequences for evil doers, but in Linnets & Valerians there were characters with dark motives and actions who didn’t have to face the consequences of their deeds. I think this is confusing to a child.
One particular instance that bothered me was when Nan discovered a book of spells in a cupboard in her parlour. They had been written by Emma Cobley, a woman who was jealous because the man she loved married Lady Alicia. Emma used her spells to inflict Lady Alicia’s son so that he became deaf and dumb, while her husband, Squire Valerian, was afflicted with a loss of  memory. Both of them were estranged from Lady Alicia for many years and she believe them to be dead. The children, with the help of old Ezra who lived with Uncle Ambrose, were able to reverse the spells and reunite Lady Alicia with her loved ones.
When Emma discovered her book of spells had been burned and her deeds revealed, she replaced the old sign of the falcon on the inn that had been removed when Squire Valerian disappeared and just went back to life as usual as though nothing had happened. No consequences.

In Tending the Heart of Virtue by Vigen Guroian, a book that explores the power of story in awakening a child’s moral imagination, he writes:

‘Children are vitally concerned with distinguishing truth from falsehood. This need to make moral distinctions is a gift, a grace, that human beings are given at the start of their lives.’

Magical realism and fantasy stories can project fantastic \’other\’ worlds while still paying attention to truth and without clouding real moral laws.

\’Becoming a responsible human being is a path filled with potholes and visited constantly by temptations. Children need guidance and moral road maps and they benefit immensely with the example of adults who speak truthfully and act from moral strength…
some well-meaning educators and parents seem to want to drive the passion for moral clarity out of children rather than use it to the advantage of shaping their character. We want our children to be tolerant, and we sometimes seem to think that  too sure sense of right and wrong only produces fanatics.\’

I would have been more satisfied if Elizabeth Goudge hadn’t made Emma’s actions seem trivial.

However, Ezra was never quite sure of the inwardness of Emma’s virtue…

Apart from this episode in dealing with Emma, the story ended well and everyone lived happily ever after.

Linking to Back to the Classics 2018: Children\’s Classic

8 thoughts on “Back to the Classics: Linnets & Valerians by Elizabeth Goudge (1964)”