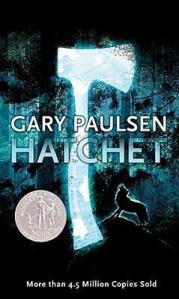 Hatchet by Gary Paulsen is a gripping short story about a thirteen-year-old city boy who survives a plane crash in the Canadian wilderness after the pilot suffers a massive heart attack mid-flight.
Brian Robeson is flying from New York to Canada on a small Cessna plane to stay with his father for the summer. He is the only passenger and it is the first time he’d ever been on a plane.
Brian survives the crash of the plane into a lake, escaping with only the clothes he is wearing and the hatchet his mother gave him strapped to his belt.
He realizes very quickly that he needs shelter and food and begins his education in survival skills. He finds berries, learns how to spear fish and birds with his homemade spear, and with the aid of his hatchet, discovers how to start a fire.
He survives an attack by a moose, an encounter with a bear, a tornado, the torturous afflictions of mosquitoes and in the process gains some inner resolve and strength that he didn’t have before.

If the story was confined to the plane crash, the boy’s attempts to keep alive, and his growth during the ordeal, it would probably be an excellent read for a child around the age of twelve, but there are a few themes that might cause concern for parents, and I’d recommend a pre-read before handing it to your child (it’s only about 180 pages).
The reason Brian is travelling to Canada to spend the summer with his dad is because his parents recently divorced and he is on his first visit to his father’s new home.
Bit by bit Paulsen reveals Brian’s secret: he had seen his mother in the company of another man in her car and had seen them kiss. This knowledge burned inside him and during the flight his mind flashes back to the scene; to his strained relationship with his mother who was unaware that Brian knew about her infidelity; to the secret his father was unaware of.

Divorce.
It was an ugly word, he thought. A tearing, ugly word that meant fights and yelling…the breaking and shattering of all the solid things…
Divorce.
The Secret.
Fights.
Split.
The big split. Brian’s father did not understand as Brian did, knew only that Brian’s mother wanted to break the marriage apart. The split had come and then the divorce, all so fast, and the court had left him with his mother except for the summers and what the judge called ‘visitation rights.’ So formal. Brian hated judges as he hated lawyers. Judges who leaned over the bench and asked Brian if he understood where he was to live and why. Judges who did not know what really happened. Judges with the caring look that meant nothing as lawyers said legal phrases that meant nothing.

Sitting in the cockpit with a dead pilot, the plane knocked off its course when the man smashes into the controls with the violence of his chest pain; trying to send an SOS when he has no idea of how to contact anyone; when in fact, he’d never even seen the inside of a plane except in movies – this is pretty intense stuff.

I thought Paulsen’s depiction of the inner turmoil of a young boy’s struggle with parental breakdown was very perceptive and real. He also conveyed the terrible shock, fear and loneliness of the boy’s predicament before and after the crash with skill. The writing style is more likely to be appreciated by children around the age of the protagonist or even younger but I’d think hard before giving the book to anyone under the age of fourteen.
There is an incident that occurs when he’d been on his own for forty-two days. He hears a plane and runs with a burning piece of wood to try to signal to the aircraft but he fails to attract any attention. Up until this point he had just been waiting to be rescued but he realizes that the doomed plane had veered way off its course and no one would be expecting him to be where he was. All his hope dissipates and he tries to commit suicide by cutting himself with his hatchet.

Madness. A hissing madness that took his brain. There had been nothing for him then and he tried to become nothing but the cutting had been hard to do, impossible to do, and he had at last fallen to his side, wishing for death, wishing for an end…
Still there on his side and the sun came up and when he opened his eyes he saw the cuts on his arm, the dry blood turning black; he saw the blood and hated the blood, hated what he had done to himself when he was the old Brian and was weak, and the two things came into his mind – two true things.
He was not the same. The plane passing changed him, the disappointment cut him down and made him new. He was not the same and would never be again like he had been. That was one of the true things, the new things. And the other one was that he would not die, he would not let death in again.
He was new.

Another incident that might be too much for younger readers occurred after a tornado tore through the area. Afterwards, when Brian went to the lake, the tail of the plane was now visible. He remembered that a survival pack had been stored near the tail somewhere and he decided to try to get out to the plane and recover the pack.
Once he got to the plane, he had to dive down to loosen the pack as it was jammed in by one of the seats. As he grabbed the pack, he saw the pilot’s head, or what remained of it, and he realized that the fish he had been eating since he’d been stranded had been nibbling on the pilot all that time and the skull was almost picked clean. A bit gross, and needless to say, Brian was sick.
The ending was a little ironic. Brian finds all sorts of goodies in the survival pack, including an Emergency Transmitter that he fiddles with but it appears to be broken. He cooks himself a slap up meal using some of the treasures that come in the pack, and as he sits savouring the smell of his cooking, a plane with floats suddenly roars overhead and lands on the lake fifty-four days after the crash.
Dumfounded, Brain stares at the pilot as he gets out of the plane:

‘I heard your emergency transmitter – then I saw the plane when I came over…’ He trailed off, cocked his head, studying Brian. ‘Damn. You’re him, aren’t you? You’re that kid. they quit looking, a month, no, almost two months ago. You’re him, aren’t you?
You’re that kid…’
Brian was standing now, but still silent…He looked at the pilot, and the plane, and down at himself – dirty and ragged, burned and lean and tough – and he coughed to clear his throat.
‘My name is Brian Robeson,’ he said. Then he saw that his stew was done, the peach whip almost done, and he waved to it with his hand. ‘Would you like something to eat?’

Overall, Hatchet is an absorbing and quick read. An interesting aspect for me is Brian’s character development during the course of the story. From a slightly tubby adolescent who had no idea of how to look after himself, reeling from the trauma of his parent’s divorce and the secret he carries, he develops into a young man who learns to overcome his emotions, to think through his decisions before he acts on them, and to learn through his mistakes.
I think in the right circumstances and at the right time this book would be a good choice, especially for a boy. I’ve read that Hatchet has been assigned in some schools for 4th grade students but I think that’s too young.

The author has written a couple of sequels that I haven’t read. Brian’s Winter (published previously as ’Hatchet: Winter’) continues the story by looking at what would have happened had Brain not been rescued and had to survive the winter.