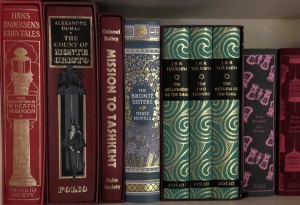 ‘…out of chance phrases and flashes of beauty (Michael) had always in old days been able to build for himself his country of escape. “Rest and ease, a convenient place, pleasant fields and groves, murmuring springs, and a sweet repose of mind.” Cervantes had known the same country, and had doubtless retained the power to create it even in the midst of misery, so great were his own interior riches.
But Michael’s imagination had always been dependent upon exterior bounty, and cut off from that he had been cut off from his country too.’

The Rosemary Tree by Elizabeth Goudge

Goudge’s character, Michael Stone, has an aura of mystery about him as well as a great affection for Don Quixote.
It’s been said that the inspiration for Miguel Cervantes’ character, Don Quixote, came to him while he was in prison and Michael believed that thinking of the great Cervantes and his suffering helped to keep him sane at times.
Cervantes had a great store of interior riches that he drew upon during his miserable and inhumane imprisonment by Ottoman pirates, whereas Michael was reliant upon external sources, and once they were removed, his imagination was unable to give him a place of rest; to take him to his country of escape. He did not have to power to create a sweet repose of mind, a pleasant place, because he had never made the effort to store up interior riches.

Last year I lost myself in one of the most inspirational autobiographies I’ve ever read: Life and Death in Shanghai by Nien Cheng, a woman, who in her early fifties, who was locked up in solitary confinement for six and a half years during the Cultural Revolution. During those years she drew upon her interior riches: Poetry and Psalms she had memorised; the intellectual culture of thinking and remembering she had practised throughout her life while she was still free; not to mention the physical disciplines she made herself undergo to keep her body from total deterioration while enduring the effects of starvation in prison.

Interior riches. We never know when we may be left without external resources to sustain our souls but what we have made a part of us can’t be taken away.

Mother Culture: filling my soul with Interior Riches for the present, and to draw upon in the future.