We went on a family camping trip in mid-January which was a great nature study opportunity. We only went about three hours north of our home but it’s surprising how much difference that short distance makes in the local flora & fauna.

For years I’ve heard cicadas but I’ve only found their shed skins so I was surprised to find full-grown cicadas in plentiful supply while we were away. Most of them were dead & I found out later that that was probably due to the run of very hot weather we’ve had. The one below was about 3″ or 9 cm long. For an article about Aussie cicadas see this newspaper piece.
For a website devoted to them see Cicada Mania. For a poetic piece on these maddeningly noisy but fascinating creatures check out ‘The Song of Cicadas’ by Roderic Quinn. 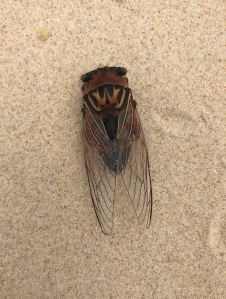 Moozle just had her 13th birthday, while we were camping, actually, & I’d been holding off starting a Commonplace Book with her until now. I’d been allowing her to choose some of her own copywork material in the past year or so and lately she’d begun reading out passages in books that caught her attention so I thought now would be an opportune time. She chose a notebook and made a title for the front.

She’s acquiring the habit of commonplacing without me reminding her… 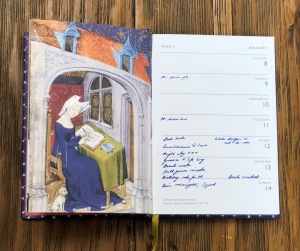 Happy campers – it rained overnight on the second day, hence all the towels & clothes hanging up around the place.

Not to mention a tent fail. It hadn’t been used in a while & when Moozle & Benj set it up they discovered that it didn’t have a fly so they got a little wet during the night & the whole thing drooped: 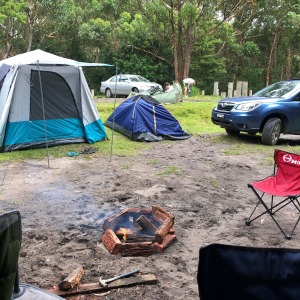 Goanna – a good three feet in length. I took this photo from a distance with my phone.

On the first night a fellow camper mentioned to my husband that he’d seen a large snake on the path to the bathrooms so when I woke up in the middle of the night needing to visit the loo, I got my husband to accompany me just in case I met the creature. We decided that as we were up that we might as well go for a walk along the beach, about five minutes away. So in the early hours of the morning we were looking up at the spectacular Milky Way and listening to the sounds of the sea. Living in suburbia you just don’t see the sky like that and even where we were camping just over the ridge, the trees obscured a good part of the sky. We also had a great view of bioluminescence as the waves were crashing in onto the beach.

This is the path we walked down on our night visit to the beach. The beach is just past the bushes & down a hill. I’m happy to say we didn’t come across any snakes! 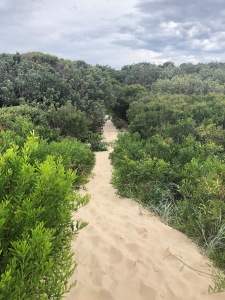 On the second night we all had an evening walk along the beach and found hundreds of crabs as it became dark, scuttling around as we shone a torch on them.

Science Notebooks
‘…there is the danger that their representation of facts may become more to them than the facts themselves, that the show of things may occupy their whole minds.’
Charlotte Mason
I read this in Charlotte Mason’s Formation of Character last week. Moozle had done two science experiments and decided that she’d like to redo them and make a video. It took quite some time and when her Dad saw them that night he observed that it looked like the science was an aside to the video production. Which was true, but she’d already done the experiment & written it up. However, I can understand Mason’s concern that the show of things can take over and fill their minds, with the facts themselves getting lost in the process.

I posted the videos on my Instagram account which I’ve had for a little while but haven’t used much. My old phone made it difficult for me but now I’ve got a decent one I’ve started to post there.
This is one of the experiments she did on the video: 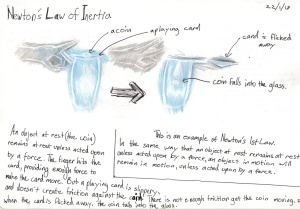 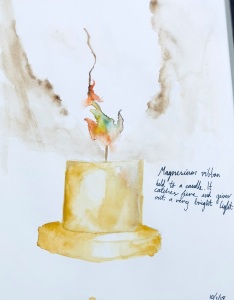 As you can see, she has been getting good use out of the watercolour set she received at Christmas. When she has done one of her more artistic notebook entries, I have her explain the concept she’s illustrated to make sure she has a good understanding of it, even though she hasn’t included a lot of detail in the entry.

Peace
The steadfast coursing of the stars,
The waves that ripple to the shore,
The vigorous trees which year by year
Spread upwards more and more;

The jewel forming in the mine,
The snow that falls so soft and light,
The rising and the setting sun,
The growing glooms of night;

All natural things both live and move
In natural peace that is their own;
Only in our disordered life
Almost is she unknown.

She is not rest, nor sleep, nor death;
Order and motion ever stand
To carry out her firm behests
As guards at her right hand.

And something of her living force
Fashions the lips when Christians say
To Him Whose strength sustains the world,
‘Give us Thy Peace, we pray!’

* Bessie Rayner Parkes was Hilaire Belloc’s mother. Belloc, a prolific author, who was a friend of Chesterton, is famous for his Cautionary Tales for Children.

A visitor to our backyard later in the month: a Black (or Swamp) Wallaby 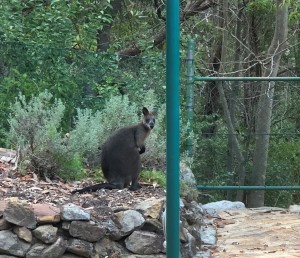