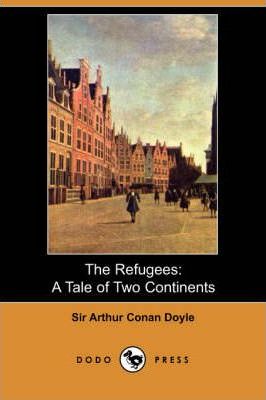 The Refugees by A. Conan Doyle is subtitled, A Tale of Two Continents as it takes begins in France and continues in Canada.
In 1598 the Edict of Nantes was signed by King Henry IV of France, granting the Huguenots certain freedoms and rights and putting a temporary stop to the religious wars between them and the Roman Catholics that had been going on in France since the 1560’s. In 1685 the Edict of Nantes was revoked by Louis XIV, Henry’s grandson. The Refugees begins just before the Edict was revoked and takes the reader into the court of Louis XIV at a time of great intrigue and machinations.
Louis has a mistress, the volatile and ruthless Madame de Montespan, but he has had enough drama and would like a more peaceable wife. In fact he loves Madame de Maintenon, a very gracious, pious, and beautiful widow, whom de Montespan had employed as a governess. He was impressed with her character and she was considered to be a good influence upon the King, therefore the Church leaders were keen to encourage the relationship for the good of the country.
With encouragement from the Catholic Church leaders, Madame de Maintenon is advised to acknowledge her love for the King and agree to marry him. One of the conditions the Church leaders place on the marriage is that Madame de Maintenon, an ardent Catholic, would influence the King to revoke the Edict of Nantes.
Amory de Catinat is a guardsman in the service of the King. He also happens to be of Huguenot descent and is engaged to his cousin, Adele Catinat, daughter of a famous Huguenot cloth maker. Amory has risen quickly through the ranks of the army and has served his King well. The young man is ambitious and idealistic but when the King puts Amory’s fidelity to the test by asking him to sign an order that the Huguenots give up their beliefs or suffer banishment or captivity, at the same time as he promotes him to a major, Amory refuses.

“Man, you are surely mad! There is all that a man could covet on one side, and what is there on the other?”
“There is my honour.”
“And is it, then, a dishonour to embrace my religion?”
“It would be a dishonour to me to embrace it for the sake of gain without believing in it.”

Driven, but feeling no way out of his predicament, the King asks Madame de Maintenon, now his wife, what he should do and her reply, together with the admonishment of the Bishop and the Abbe, persuades him to sign the document.

De Catinat had taken a step forward with his hand outstretched. His ardent, impetuous nature had suddenly broken down all the barriers of caution, and he seemed for the instant to see that countless throng of men, women, and children of his own faith, all unable to say a word for themselves, and all looking to him as their champion and spokesman. He had thought little of such matters when all was well, but now, when danger threatened, the deeper side of his nature was moved, and he felt how light a thing is life and fortune when weighed against a great abiding cause and principle.
“Do not sign it, Sire,” he cried. “You will live to wish that your hand had withered before it grasped that pen. I know it, Sire; I am sure of it. Consider all these helpless people – the little children, the young girls, the old and feeble. Their creed is themselves. As well ask the leaves to change the twigs on which they grow. They could not change. At most, you could but hope to turn them from honest people into hypocrites. And why should you do it? They honour you. They love you. They harm none. They are proud to serve in your armies, to fight for you, to work for you, to build up the greatness of your kingdom. I implore you, Sire, to think again before you sign an order which will bring misery and desolation to so many.”

As a result of Amory’s intervention, he loses his commission on the spot and rushes away from the palace. Flying to his betrothed\’s home, he urges her and her father to get ready to leave France.
What follows is a mad dash for safety on board a boat, a pursuit by the King’s men, and a shipwreck.
When they finally reach Canada, their danger is not over for now they have not only the Roman Catholic Frenchmen seeking them in order to send them back to be tried in France, but also the savage Iroquois on the warpath.

The Refugees is an exciting historical novel delivered in Conan Doyle’s wonderful literary style. From start to finish it is full of action, adventure, and historical insight. Interspersed with some humour at times, this is a great read, and as always, I’m left impressed with the author’s knowledge of history and his ability to weave this into an engrossing narrative.

The age suitability for this book is about 14 years and up. There are some mild adult themes to do with the King\’s mistresses but it doesn\’t go into too much detail. It is also fairly gory in places and mentions some forms of torture used by the Iroquios.
The book is free online in a nicely done Kindle version here.

Inheritance Publications in Canada has reprinted this book. I\’ve ordered books from them after emailing them for postage & delivery details, and although the books took a couple of months to get to Australia, (which they informed me about) they arrived in good condition & the postage was very reasonable. This is a good option if you were interested in buying a number of books, otherwise if you\’re in Australia, you\’d probably be better off getting the Dodo Press version from Book Depository. I have a few books from this publisher and they are quite good. 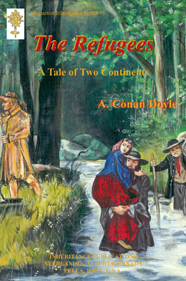 The Refugees is my choice for a 19th Century Classic in the 2018 Back to the Classics Challenge.