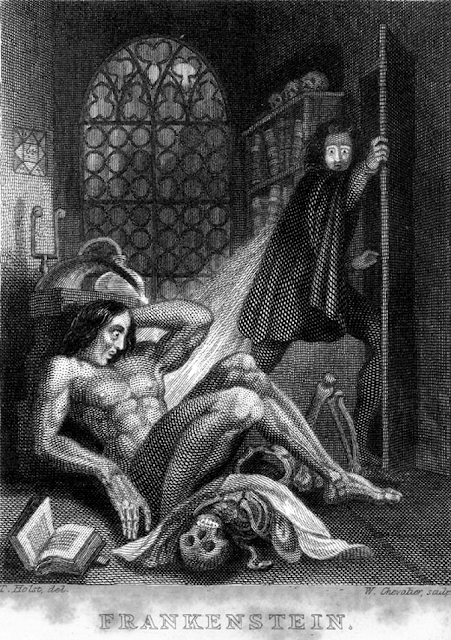 The Preface and the first few chapters of Frankenstein by Mary Shelley seemed quite promising but the story just went pear-shaped after that. What a miserable novel, full of rambling prose, implausible situations and occurrences, but after reading some biographical information on the author, it isn’t surprising. She made some lousy life decisions, went through some serious traumas, and the book is a mirror of her ravaged personality, her own personal nightmare.
A book that deserves pride of place on my list of least-liked books!

Frankenstein by Mary Shelley was first published in 1818 when the author was twenty-one years of age, and was subtitled, The Modern Prometheus. It was revised in 1831 and her husband, the poet Percy Bysshe Shelley, made some changes so he may be to blame for the rambling, florid writing. It is found on many high school reading lists, is included in a wide range of school curriculum, and is regarded as the classic horror novel. It is an epistolary novel related three different narrators and has sometimes been called the first science fiction novel.

The first narrator, R. Walton, is on a voyage of discovery in the Arctic Circle and he writes to his sister telling her about a man he takes onboard his ship after finding him on a sledge with one dog, adrift on a large fragment of ice.
The second narrator is the rescued man, a scientist by the name of Victor Frankenstein, who recounts his story to Walton in an effort to warn him of the dangers of acquiring knowledge at any cost.
Frankenstein relates the process by which he discovers how to animate lifeless matter and his assembling of a patchwork of cadaver parts, of larger than life proportions, that he brings to life – his unnamed Monster.
Then, duh! He is horrified – as if he hadn’t seen how this creature would turn out – and rejects his ‘child.’
The Monster disappears and later we hear his side of the story:
Basically, ‘I was born good, and because I was cruelly rejected, and everyone hated me, I turned out bad.’
Monster begins to take revenge on Frankenstein by knocking off his loved ones over a period of time.
He gives Frankenstein an ultimatum:

\’I am alone and miserable; man will not associate with me; but one as deformed and horrible as myself would not deny herself to me. My companion must be of the same species, and have the same defects. This being you must create.\’

Frankenstein feels he has no choice but to comply but then changes his mind, provoking the Monster to more works of revenge. His creator then decides to return the vengeance and goes off in search of the Monster in order to kill him. This brings us back to the beginning of the narrative where Walton finds him.
I don’t know whether Shelley wanted us to sympathise with Victor Frankenstein, but he was a coward in many respects and ultimately a villain. The monster was portrayed in an aspect that stemmed from the teachings of Rousseau and I think we’re meant to feel that he was hard done by.

\’…all Romantic horrors are diseases of excessive consciousness, of the self unable to bear the self.\’

Anyhow, I’ve read it, but unlike some other classics, I don’t know that I’d bother re-reading it.

I did like this reference to Plutarch by the Monster:

\’The volume of Plutarch\’s Lives, which I possessed, contained the histories of the first founders of the ancient republics…I learned from Werter\’s imaginations despondency and gloom: but Plutarch taught me high thoughts; he elevated meabove the wretched sphere of my own reflections to admire and love the heroes of past ages…I read of men concerned in public affairs, governing or massacring their species. I felt the greatest ardor for virtue rise with me, and abhorrence for vice…\’

Linking to Back to the Classics 2017: Gothic or Horror Classic