The Death of Julius Caesar by Vincenzo Camuccini (1798) 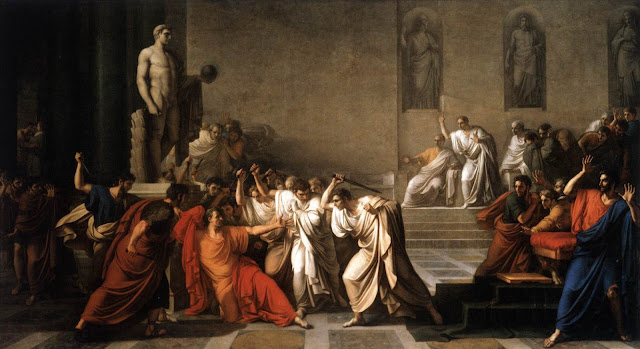 Shakespeare’s play, Julius Caesar, is basically a tragedy, although, like many of his other plays, the distinctions are often blurred, and so this play is partly a history and involves civil war and the politics of Ancient Rome.
Shakespeare used Plutarch’s Lives as his source for Julius Caesar but he altered some of the historical account as he was wont to do.
I read Plutarch’s Life of Julius Caesar before I read this play which helped fill in some background not present in Shakespeare’s account. Plutarch began his Life of Caesar in 75 BC with Caesar’s capture by pirates and he shows some facets of Julius Caesar’s personality that Shakespeare omits.  Shakespeare focussed on the conspiracy and the subsequent assassination of Caesar in 44 BC and then the repercussions of his death. Brutus is actually more prominent than Caesar in the play.
The Tragedy of Julius Caesar opens with Caesar’s triumph over Pompey in Act 1, Scene 1 and by Scene 2 Cassius’s feelings towards Caesar are out in the open as he confides in Brutus.

Cassius:
The fault, dear Brutus, is not in our stars
But in ourselves, that we are underlings.
Brutus and Caesar: what should be in that ‘Caesar’?
Why should that name be sounded more than yours?

I am glad that my weak words
Have struck but thus much show of fire from Brutus.

Julius Caesar – powerful, skilful, arrogant. Physically, he suffered from epilepsy; Shakespeare exposes some of his more undesirable characteristics in the lead-up to his death.

Brutus – idealistic and honourable, he appears to act for the common good but is also manipulated by Cassius. Antony was later to declare that Brutus was the only conspirator who acted honourably:

Antony:
This was the noblest Roman of them all:
All the conspirators, save only he,
Did that they did in envy of great Caesar.

Caesar:
Yond Cassius has a lean and hungry look, He thinks too much: such men are dangerous.
Antony:
Fear him not, Caesar, he’s not dangerous, He is a noble Roman and well given.
Caesar:
Would that he were fatter!

Antony – loyal to Caesar, ruthless. He manipulates the mob during his funeral speech for Caesar and unleashes his anger and revenge over the assassination.
When he captured Lucillius who had posed as Brutus, he treats him with respect, saying:

This is not Brutus, Friend, but, I assure you, A prize no less in worth. Keep this man safe, Give him all kindness. I had rather have Such men my friends than enemies…

Octavius – a cool character who first appears in Act 4. He didn’t come across as very likeable except where he defends Lepidus against Antony’s scorn:

Antony:
This is a slight, unmeritable man,
Meet to be sent on errands…

Octavius:
You may do your will,
But he is a tried and valiant soldier.

Antony:So is my horse, Octavius, and for that
I do appoint him store of provender.

Calpurnia – Caesar’s wife who has a dream about his death and tries to persuade him not to go to the Senate. She and Caesar were unable to have children.

Portia – the wife of Brutus. They are portrayed as having a loving relationship. She discerned changes in her husband and was concerned about him.

This play ends tragically, with suicide one of the main causes of death:
Portia, Brutus, Cassius, Titinius, all end their own lives at various points in the play.

Act 4, Scene 3 – this almost reads like a comedy. Cassius and Brutus have a heated argument in Brutus’s tent when he was camped near Sardis in Asia. Brutus basically tells Cassius he’s acting like a madman and asks why he should give way to ‘rash choler.’
Cassius becomes melodramatic and offers his dagger to Brutus telling him to strike but the situation is defused by Brutus admitting blame:

Brutus:
When I spoke that, I was ill-tempered too.

Cassius:
Do you confess so much? Give me your hand.

Brutus:
And my heart too.

Cassius:
Have you not love enough to bear with me
When that rash humour which my mother gave me
Makes me forgetful?

Brutus:
Yes, Cassius, and from henceforth
When you are over-Ernest with your Brutus,
He’ll think your mother chides, and leave you so.


And of course, the funeral speech by Antony.

The central idea of the play considered as a tragedy is that Good cannot come out of Evil. \”Brutus is noble, wise, valiant, and honest,\” but he made shipwreck of his life by one great error. He committed a crime to prevent, as he thought, a greater crime, and by so doing he brought upon himself and his country greater evils than those he had sought to avert.
Julius Caesar by F. A. Purcell & L.M. Somers (1916)
Linking to Back to the Classics 2107: Classic Published Before 1800
\’The business of education is with us all our lives…\’