Ruth Park was born and educated in New Zealand and moved to Australia in 1942 where she married D\’Arcy Francis Niland, also an author, and best known for his novel, The Shiralee (1955).

The Hole in the Hill was Ruth Parks\’ first children\’s book and was published in 1961. It was published in the USA as Secret of the Maori Cave and is partly the story of the meeting of two cultures, and partly just a good old adventure. 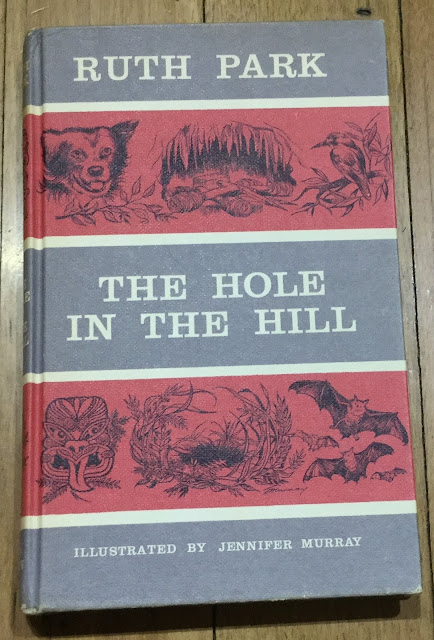 Fourteen year old Brownie Mackenzie and her twelve year old brother, Dunk, travel with their father from New South Wales to New Zealand after their Great Uncle died. The eccentric old man left his run-down New Zealand farm, Three-Mile, to their father in his will with a letter stating that some day the place might be more valuable than gold.
Mr. Mackenzie had laughed at this as his uncle had a reputation of being quite strange but Dunk was excited at the prospect that they might come across some sort of treasure.

Arriving in Auckland, the two children quickly became bored and homesick as they waited while their father discussed the affair with a solicitor. Impatient with the two of them, Mr Mackenzie suggested they travel on ahead to the farm and do some exploring and camping for a couple of days and when he had finished his business he would join them.
So off they went the eighty miles on the train to Te Taniwha, the closest town to the farm where adventure, mystery and danger awaited them.

She looked disconsolately around the landscape. How different it was from New South Wales, where at this hour the galahs would be whirling down in clouds to drink at the lagoons, rose pink on one turn, Pearl grey on the next, making their funny squeaking noise like a cork rubbing on a bottle. The rally eucalypts would be standing frail and black against a ruby-bright Australian sunset, and the big bogong moths would be coming in to boom and bumble against the lamps.

Ruth Park has created a very real sense of time and place in this, her first book for children. The New Zealand setting with the description of caves is excellent:

They peered through stalactites at the cave beyond. The light of the torch was swallowed up by the enormous darkness, but it showed a chamber unimaginably huge sculptures from icy-white marble, with a roof scalloped and fringed and dew-dropped with glittering folds and loops and pinnacles. The floor was peaked and drawn up into mighty blunt pillars, here and there prickling and gleaming as though it were carpeted with polar-bear skin. Only the gentle, speaking roar of falling water filled the cave, steady and awesome. Brownie felt tears in her eyes at the strangeness of it, that this magical, other-world beauty should be hidden away like this, in a hole in the hill.

When we took some of our children through the glow-worm caves in New Zealand, we couldn\’t find anything at the time that explained these creatures in a non-technical, living way, so I was really pleased to find this little descriptive passage in The Hole in the Hill:

In spite of her natural-history lessons, Brownie did not know that the New Zealand glow-worm is creature unique in its class, a shabby little grub, the larva of a mosquito-like insect with a wing-span of less than an inch; she knew, however, that his primitive fairy speck if life, living its life darkness and silence, fished for food by means of a dangling necklace of minute diamonds, a sticky finger of cold fire which lured and trapped tiny flying midges.

Between frightening noises in the night, being chased by \’Captain Cookers\’ (feral pigs introduced when Captain Cook first visited New Zealand), dangerous underground caverns and a troubling mystery, the book moves along apace and keeps the reader interested. 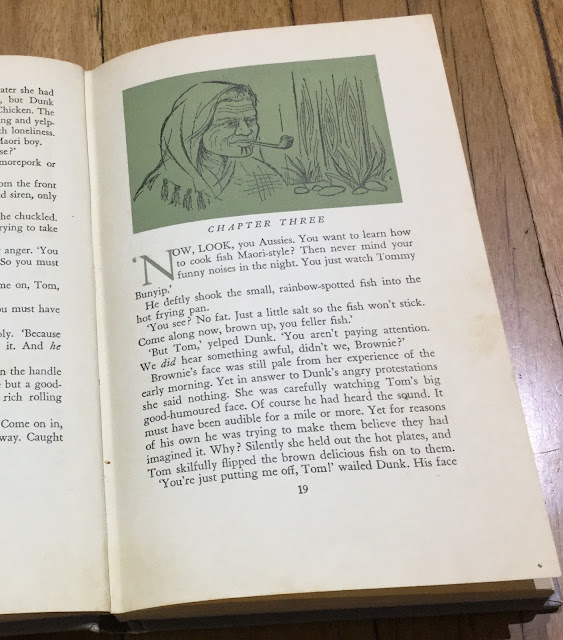 I think the ideal age for children to read this book on their own is about 10 years of age but the interest level is fairly broad so it would make a good family read aloud for around ages 12 years and under. It is out of print but available secondhand, especially under its alternative USA title.
HB 144 pages.

Information on the author:

A letter the author wrote to children