Something I both love and am frustrated by at times is when ‘Education’ get sidelined by ‘Life.’ The past few weeks have been rather crazy and frustrating, because my well-laid plans haven’t worked out the way I wanted. ‘Life intervened. Enter Charlotte Mason’s motto:

Education is an Atmosphere, a Discipline and a Life
‘The only means a teacher may use to educate children are the child’s natural environment, the training of good habits and exposure to living ideas and concepts. This is what CM’s motto “Education is an atmosphere, a discipline, a life” means’

It started off with a few of us sick with a flu-type illness, and of course, when you have a houseful, everyone gets sick one after the other so you feel like you’re running an infirmary. I hardly ever get sick but I did this time. I’d already arranged to look after my Mum for 10 days while my sister was interstate and she wasn’t too well either when I picked her up. Between the two of us we were a bit miserable for a couple of days.
We didn’t get any book work done in those ten days but my daughter spent time with her Nanna, who she doesn’t get to see very often. She gave up her bed for those ten nights and slept on the lounge chair downstairs; she helped me get my Mum to take her medications, which was a herculean effort at times; she took her for a short stroll around the house most days and talked about the plants we have in the garden, made her cups of tea and sat and read House & Garden magazines with her.
I thought at the time that we were creating an atmosphere for Mum by encouraging her to get outside, which she never does any more, and to take an interest in the garden, which used to be so pleasurable for her. Getting her to read again was something I was really happy about as she used to be an avid reader but has neglected that in recent years.

The worst part of not being well was that I had to keep away from my eldest daughter who is expecting her first baby in about four weeks. I was also trying to plan a baby shower at the same time and ended up having to do most of the preparation at the last minute.

We had the baby shower last weekend and the night before we had been to see a performance of Giselle. I wrote about some books we’ve used that are great to read before you head off to a live performance, here. Despite the last minute rush, everything turned out well, including having perfect, slightly overcast weather for the afternoon on our upstairs balcony.

A recipe for the Carob Balls pictured above:
3/4 cup peanut butter
1/2 cup honey
1/2 cup water
1/2 cup sultanas/raisins
1/4 cup carob powder (cocoa or cacao may be used instead)
1\’2 cup dessicated coconut
1/2 cup skim milk powder
Put peanut butter, honey, water and sultanas into a saucepan & bring to the boil for about 3 or 4 minutes, stirring all the time.
Remove from stove, add carob and coconut and when cooled, skim milk powder.
At this stage I usually put the mixture in the freezer for about 1/2 an hour and then take it out; roll into balls of desired size & roll in coconut.
Store in fridge or freeze ahead of time.

Moozle made her specialty lemonade scones – only three ingredients!

Below is an old recipe a friend gave me when I was first married – it is always a hit so maybe you may like to try it out (let me know if you do!). I’ve often omitted the chopped almonds and this time I used some almond meal instead. A great recipe to freeze ahead of time: 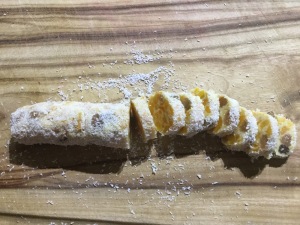 Some of my helpers setting things up… 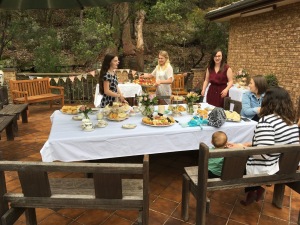 Other happenings in the past two weeks included a visit from our niece who lives in Northern NSW. She was chosen as a student representative to travel to the battlefields in Belgium and we caught up with her for breakfast on her return trip as she came through Sydney.

Our eldest son and his wife returned to Australia after six weeks in Finland, the Scottish Highlands, Croatia, Spain and Portugal. The highlights for them were the Highlands & Spain, especially Barcelona. 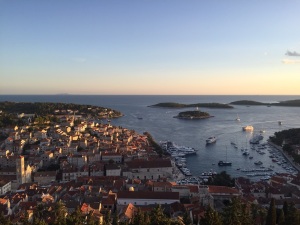 My mother-in-law came down from Queensland for the weekend of the baby shower and spent some time doing Origami with Moozle and listening to her practicing the cello.

I watched this film again with my Mum. I didn’t enjoy the book as much as I did the movie, but I have to admit, I did rush through reading it while I was visiting family interstate one year. I haven’t got around to re-reading it yet but I just love the scenery in this film and the sparse narrative:

Me – I just finished ‘My Love Must Wait’ by Ernestine Hill. An excellent Aussie classic on the life of Matthew Flinders.
I recently started Life Under Compulsion by Anthony Esolen. I’ve read his previous book, Ten Ways to Destroy the Imagination of Your Child and thought it was very good:

My Husband – he’s been reading David Baldacci’s Camel Club series. You can read about them here.
He likes Vince Flynn’s books but has read them all and Baldacci’s books are a similar type. I haven’t read any of them but they are all spy/espionage/thriller books.

My Mum used to read a lot but has got out of the habit in recent years so I gave her an Agatha Christie book to read while she was staying with us. She’d read it years ago and enjoyed re-reading it.

Moozle is on another Biggles splurge.

Benj is reading and enjoying ‘Worship’ by Graham Kendrick, which was written in 1984 and that we bought around the time it came out. Out of print.

Education is a Discipline

I started Latin Alive 1, published by Classical Academic Press with Moozle this week. I’ll be posting a review about it in early to mid November and will be hosting a couple of giveaways here and on some other blogs. 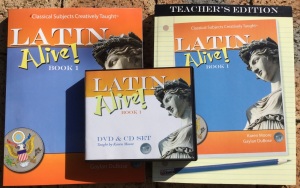 Moozle is now swimming six hours a week – squad/competition training. The lessons are either early morning (very early) or late afternoon. She was swimming one afternoon per week during this past year and wanted to do more, but I was reluctant to add any more afternoon lessons as it is right on dinnertime & I have three hungry young lads and their Dad arriving home. So I reluctantly added two early mornings. I thought I’d die and I didn’t think my young lady would be wakeable at that early hour but we’ve surprised ourselves. We’ll see how long we last…

Getting back to well-laid plans getting sabotaged – I think when you decide to educate your own children you do need to count the cost, which my husband and I did nearly 25 years ago. There will be seasons that will be difficult because of sickness, pregnancy, and unexpected interruptions & there is also the aspect of constant change as your children grow, but in spite of these things, it’s important to have a peaceful heart and to trust God that what we sow will bear fruit in time to come.

To the faithful He shows Himself faithful. Psalm 18:25

Linking up with Finishing Strong and Weekly Wrap-up

12 thoughts on “Education and Life”