By the pricking of my thumbs
Something wicked this way comes.
Macbeth

By the Pricking of My Thumbs is the fourth in a series of five books which make up Agatha Christie\’s Tommy & Tuppence crime novels.
Tommy and Tuppence are first introduced as young friends in The Secret Adversary (a great story, by the way) and by the end of the book they realise they love each other and decide to be married. Throughout the series, the very English Tommy and Tuppence (also known as Mr. & Mrs. Beresford) age and get on with their lives and in By the Pricking of My Thumbs they are in their fifties or thereabouts, still happily married, with two adult children and the same man-servant (Albert) they\’ve had all along. By the last book in the series, the couple are in their seventies, and are still sleuthing. This is an unusual and appealing little ploy of Christie\’s not found in her other books where Hercule Poirot and Miss Marple remain in the state we first find them in. 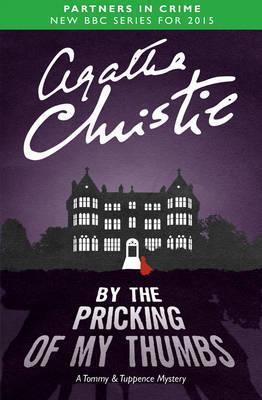 By the Pricking of my Thumbs, while still containing the brisk, chatty feel of the Tommy & Tuppence books, has an almost Gothic and sinister feel to it in places. The action starts when Tommy & Tuppence pay a visit to a disagreeable aunt in a nursing home. Out of this unlikely beginning a macabre history is unearthed and Tuppence unwittingly becomes ensnared in a killer\’s latest plans when she decides to check up on a previous inmate of the nursing home who has disappeared in mysterious circumstances. The problem is, that Tommy has no idea of the danger his adventurous wife is in, so when Tuppence doesn\’t return  from a short car trip in his absence, it takes a while before Tommy begins to feel that perhaps something is amiss.
This was quite an enjoyable read but it was a little weird in places and there were a few loose ends that left me guessing. One example of this was the case of Mr Eccles, a lawyer who was suspected of being involved in criminal activities. At one minute it looks as if all will be revealed, but at the end, all is not. I don\’t know where that was meant to go, and it always annoys me when I\’m left with questions!
I read this in the middle of a miserable week of a flu bug – a light read with plenty of guessing and conjecture, but not really the resolution I was expecting. Maybe my lack of head space was responsible for the feeling that somehow the story didn\’t add up in the end, but there was also the sense that Christie decided to get it all over with and bring everything to a screeching halt without giving the reader time to come along with her. Besides that little complaint, the Tommy & Tuppence characters are just delightful and Christie captures a cosy couple and their household with warmth and humour.

Mr. and Mrs. Beresford were sitting at the breakfast table. They were an ordinary couple. Hundreds of elderly couples just like them were having breakfast all over England at that particular moment…
An elderly couple having breakfast together. A pleasant couple, but nothing remarkable about them. So an onlooker would have said. If the onlooker had been young he or she would have added, \”Oh yes, quite pleasant, but deadly dull, of course, like all old people.\”
However, Mr. and Mrs. beresford had not yet arrived at the time of life when they thought of themselves as old. And they had no dea that they and many others were automatically pronounced deadly dull solely on that account. Only by the young of course, but then, they would have thought indulgently, young people knew nothing about life.

I\’ve mentioned in previous posts that The Secret Adversary was a good introduction to Agatha Christie for kids about age 12 years and up, but this title, with its inclusion of infant deaths, and a couple of creepy characters, definitely isn\’t.