Ten Fingers for God explores the life and work of Dr. Paul Brand, who was born in India to missionary parents, lived there until he was sent to school in England, and later returned to work and teach at a medical college in the southern Indian city of Vellore.
Surgeon, teacher, and environmentalist, Dr. Brand achieved fame mostly for his pioneering research on the disease of leprosy. As a child growing up in the mountains of Madras, (re-named Chennai) he witnessed an incident which remained in his memory, a potent reminder of the awful plight and stigma for victims of leprosy.
When Paul was nine years of age, his family had a furlough in England. A few months later, his parents returned to India while he and his younger sister, Connie, remained with relatives in order to go to school. They never saw their father again as he died of Blackwater Fever a few years later. 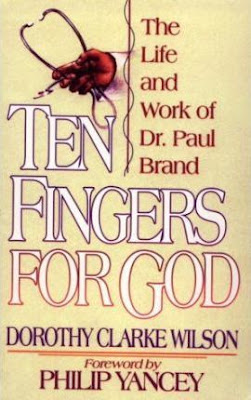 Paul disliked study and the school routine. He was used to the freedom of life in India where he\’d sit up in a tree to do his lessons and pass his work down to his mother sitting on the ground underneath. He refused to conform, and his reports consisted of remarks such as \”Poor, fair, rather disappointing; Next term we shall hope for better things.\”

It wasn\’t books that Paul disliked, merely school books. He read avidly, often on the way to school, with such eagerness that he often ran into people. His taste in literature was respectable if not highbrow, tending largely toward adventure takes such as The Coral Islands and Westward Ho! He liked Dickens but abhorred Scott. In fact, English, next to the sciences, was his favourite subject.

Paul\’s mother hoped he would train to be a doctor. His father had wanted to do this himself, at one time starting a course at Madras University, but Paul had no intention of becoming a doctor. The memory of his father\’s medical work repulsed him – pus, ulcers, blood. He decided to leave school and train to be a builder.
After five years of training he applied to the mission board but was rejected as \’not being ready.\’ The two options open for him were Bible School and a short course in tropical medicine. He didn\’t want to do either… but he remembered his father.

Jesse Brand had left the building trade for what he considered a nobler calling. He had prepared for his work by taking a short course in tropical medicine. His son would do the same.

Paul found that he loved the work and the study, and his whole attitude to medical work changed. In 1937, on the eve of World War II, he was accepted into the University College Medical School in London. Here he was to meet his future wife, Margaret, their courtship taking place in the midst of evacuations and bombings, and their marriage in 1943. The war gave the young surgeon experience that would normally have taken years to acquire, and when the V-I bombs came flying over London, he was operating almost constantly, repairing gun wounds, cuts and other acute injuries. It was during this time that he became profoundly interested in the repair of severed nerves and tendons, especially in hands and feet. The skill and expertise he acquired was to serve him well in his work with leprosy patients later on.

I really enjoy medical missionary biographies and this book is a re-read. Most of my children have read it also, usually around the age of 12 years or a little older, and I\’ve assigned it to Moozle this term.
Dorothy Clarke Wilson has written an engaging, joy-filled story, capturing Paul\’s earthy upbringing, his father\’s enthusiasm for nature – which he passed onto his son – his mother\’s dynamic personality and passion, Paul\’s love for the people he worked with and those he served; his struggles to overcome the stigma associated with leprosy, and his disappointments. The book also describes the disease of Leprosy (also known as Hansen\’s Disease), its mode of transmission, treatment, and its history. I would have loved to have read this when I was twelve!

\” …the most precious possession any human being has is his spirit, his will to live, his sense of dignity, his personality. Once that has been lost the opportunity for rehabilitation is lost. Though our profession may be a technical one, concerned with tendons, bones, and nerve endings, we must realize that it is the person behind it that is so important. Of course we need technicians: surgeons, physiotherapists, nurses, occupational therapists, vocational guidance specialists. But above all we need men and women who are concerned with people and who accept the challenge of the whole person, his life, his faith, and his hope.\”

John, an older, almost blind patient, came to Paul and begged to have his claw hand opened. Paul said that there were so many able-bodied young men coming for surgery… \”Your hands would take a lot of time, because they\’re stiff. And suppose, we did open them out, how could you use them? If you can\’t see or feel…\”

But the old man persisted…

\”I believe I could bring music to people…I use to be able to play the organ, and I\’m sure that if you open my fingers, I could play again.\”
\”Without being able to feel or see?\” Paul had to be brutally honest. \”I\’m sorry, John, but how could you possibly play?\”
The clawed hands crooked in a beseeching gesture. \”I know how you feel, doctor, but – please just give me a chance.\”

Paul was unable to resist, and he operated with great misgivings on John\’s hands, the results being moderately successful.
John asked to be led to an organ and he sat at the keyboard while his nerveless hands fumbled and produced some discordant sounds. Paul was glad John couldn\’t see the pity on his face…

Then suddenly the organ swelled, not merely into melody but into the full harmony of the glorious hymn, \”Jesus shall reign where\’er the sun.\” And as the music came flooding out of the crude little box there spread over the uplifted face an ineffable smile of oracle and satisfaction. Paul almost wept.

We\’re using this book in the first term of AmblesideOnline Year 7 as a devotional read and as a book set in Asia.