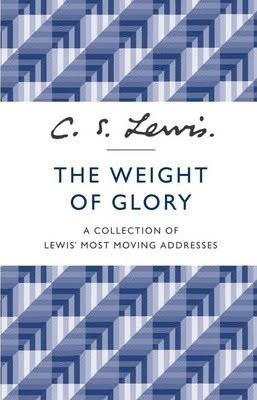 The Weight of Glory by C.S. Lewis (1898-1963) is a collection of nine essays that were transcribed from talks or sermons that Lewis gave during World War II and the years immediately afterwards, with the last (A Slip of the Tongue) delivered in 1956.
The HarperCollins edition I have, pictured above, has an introduction by Walter Hooper, an American who corresponded with Lewis for some years. In 1963, Lewis invited Hooper to visit him in England and they met at least three or four times a week, sometimes at his home, or sometimes in a pub with Lewis\’s group of friends called \’The Inklings.\’ Hooper was later to become Lewis\’s literary assistant and personal secretary and also his companion when he was ill.
Hooper\’s anecdotes of his time with C.S. Lewis give a wonderful glimpse into Lewis\’s character. He describes him as a \’ruddy, six-foot, genial man,\’ and that one of the most attractive things about him was his uproarious sense of fun.

\’…it would take someone of Boswell\’s talents to give the right idea to the completeness of this remarkable man, to show how naturally the humour blended into the more serious side, and indeed was one of the causes of his greatness, his large intellect, and the most open charity I have ever found in anyone.
He was a man, many of us have come to see, of common instincts combined with very uncommon abilities…I just knew – that no matter how long I lived, no matter who else I met, I should never be in the company of such a supremely good human being again.\’

I\’ve always appreciated C.S.Lewis but this personal account of what the man was really like increased my regard for him.
I\’m only going to comment on four of the essays in this book. They were all exceptional but some were philosophically difficult for me to get my head around so here are my thoughts on those I was able to get some sort of handle on.

The Weight of Glory

The weight or burden is glory is that, because of the work of Christ, any of us who really chooses shall one day stand before God and find approval:

\’…to be loved by God, not merely pitied, but delighted in as an artist delights in his work or a father in a son – it seems impossible, a weight or burden of Glory which our thoughts can hardly sustain.
But it is so.\’

Lewis states that our desires are not too strong, but too weak.

In the New Testament and early Christian writings, Salvation was associated with palms, crowns, thrones  – i.e. Glory. These things don\’t appeal to the typical modern but they did to Christians in times past.
The divine accolade of \”Well done, good and faithful servant,\” is a scriptural view.

\’For glory means good report with God, acceptance by God, response, acknowledgement, and welcome into the heart of things. The door on which we have been knocking all our lives will open at last.\’

There are no \’ordinary\’ people. These words open up a whole new dimension when it comes to relating to others. Which destination am I helping this person, or that one, to reach?

\’It is a serious thing to live in a society of possible gods and goddesses, to remember that the dullest and most uninteresting person you can talk to may one day be a creature which, if you saw it now, you would be strongly tempted to worship, or else a horror and a corruption such as you now meet, if at all, only in a nightmare. All day long we are, in some degree, helping each other to one or other of these destinations…\’

C.S. Lewis delivered this sermon in October 1939, about six weeks after World War II started. He asks whether, given the circumstances of war, we should continue to spend time on such things as literature, art, mathematics or biology, which seem relatively trivial. His perspective is that life has never been normal. Life has always been full of crises and emergencies in even the most peaceful times. There have always been reasonable instances to curtail our merely cultural activities but humanity has chosen to ignore those instances so we find Man conducting \’metaphysical arguments in condemned cells\’ and making \’jokes on the scaffolds.\’ Lewis himself, in the previous war, found that the nearer you came to the front line, the less you thought and spoke of the campaign or the cause. I remember this was the case when I read All Quiet on the Western Front.

\’The war creates no absolutely new situation; it simply aggravates the permanent human situation so that we can no longer ignore it. Human life has always been lived on the edge of a precipice. Human culture has always had to exist under the shadow of something infinitely more important than itself. If men had postponed the search for knowledge and beauty until they were secure, the search would never gave begun. We are mistaken when we compare war with \”normal life.\” Life has never been normal.\’

\’Never, in peace or war, commit your virtue in your happiness to the future…
It us our daily bread that we are to ask for. The present is the only time in which any duty can be done or any grace received.\’

This was one of my favourite essays in this book and I immediately understood what Lewis meant by this and could call to mind the numerous \’Inner Rings\’ I\’ve been aware of, or perhaps even been a part of throughout my life.
The Inner Ring phenomenon is an unwritten system with no formal rules. Lewis uses some lines from Chapter 9 of Tolstoy\’s War & Peace to explain this system which \’compelled a tightly laced general…to wait respectfully for his turn while a mere captain…chatted with a mere second Lieutenant.\’
The second lieutenant decided that the unwritten system was the one he was going to be guided by. He knew he was a member of the Inner Ring and the general was not.
Lewis realises that Inner Rings are necessary at times:

\’I am not going to say that the existence of Inner Rings is an evil. It is certainly unavoidable. There must be confidential discussions, and it is not only a bad thing, it is (in itself) a good thing that personal friendship should grow up between those who work together…\’

But he also points out that,

\’…the desire which draws us into Inner Rings is another matter. A thing may be morally neutral and yet the desire for that thing may be dangerous.\’

The longing to be inside takes many forms and this desire, according to Lewis, \’is one of the great permanent mainsprings of human action…
Unless you take measures to prevent it, this desire is going to be one of the chief motives of your life.\’

So, Inner Rings are to be found in the schoolyard, in the work place, in university, in politics, in home education groups and sadly, in some churches.
Some questions to ask ourselves regarding this are:

Have I ever neglected a friend I loved in order to court the friendship of someone who appeared more important or \’esoteric\’?

Have I ever derived pleasure from the loneliness and humiliation of the \’outsiders\’ after I have been on the inside of that Ring?

Do I want to join a certain group because I want to be in the know?

If I am \’in\’ this Inner Ring, do I make it hard for the next person who wants to be a part if it?

\’Of all passions the passion for the Inner Ring is most skillful in making a man who is not yet a very bad man do very bad things…
Until you conquer the fear of being an outsider, an outsider you will remain…\’

\’The circle cannot have from within the charm it had from outside. By the very act of admitting you it has lost its magic.\’

Ultimately a genuine Inner Ring exists for exclusion and as Lewis points out,
\’The quest of the Inner Ring will break your hearts unless you break it.\’

The Church is the Body of Christ and we are members of one another.
Lewis explores the community aspect of Christianity and points out that in our age the individual is exalted and religion is seen as belonging to our private lives.
This is a paradox and a strategy of the enemy as the New Testament knows nothing of solitary religion and the modern world wants everyone to be a part of a collective.

\’When the modern world says to us aloud, \”You may be religious when you are alone,\” it adds under its breath, \”and I will see to it that you never are alone.\”\’

Another stratagem of the enemy is for us to react by transferring our spiritual life into the same collectivism that is already part and parcel of our secular life.

\’…the Christian life defends the single personality from the collective, not by isolating him but by giving him the status of an organ in the mystical Body.\’

As with just about everything I\’ve read by C.S. Lewis, these essays were top notch. If you don\’t get to read the whole book I\’d recommend at least The Inner Ring which is free to read online here and The Weight of Glory, here.
Some biographical details.

Linking to 2017 Cloud of Witnesses Challenge and The Classics Club