\’A Memorable History of England, comprising all the parts you can remember, including 103 Good Things, 5 Bad Kings and 2 Genuine Dates.\’

Histories have previously been written with the object of exalting their authors. The object of this history is to console the reader. No other history does this.

History is not what you thought. It is what you can remember. All other history defeats itself.

If you have a solid foundation in British history, or have indulged in a good amount of accurate historical fiction, or if you have read the English History selections from the first six or seven years of the Ambleside Online Curriculum, you would probably enjoy this satire of school history textbooks. If not, you could be excused for being totally confused after reading it.
The first four years of my schooling was spent in Scotland and I missed out on British history when I came to Australia where the focus was exclusively Australian for the rest of primary school. Not that I remembered much – the Eureka Stockade was about it. Highschool \’history\’ brought Communism, Bolshevism, Egalitarianism, and all the other \’isms\’ but no real pageant of past events. Everything I learnt about history began when I finished my school education and it has been consolidated as I\’ve home educated seven children.
I did try reading 1066 And all That when I first picked it up secondhand a long time ago but I didn\’t have enough of a foundation in English history to make sense of it at the time. 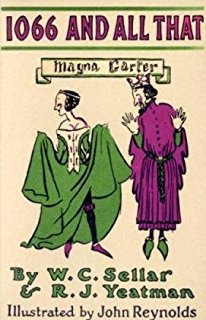 Reading it again recently was a lot more fun. In the book, How The Heather Looks: A Joyous Journey to the British Sources of Childen\’s Books by Joan Bodger (scheduled for Geography in AO Year 7) the author mentions this book in her chapter \’Looking at History\’ and calls it \’…a splendid spoof on English history and, I suppose, like a family joke – not much fun unless you know the straight of it.\’ That\’s a good way to describe it.

The first date in English History is 55 B.C., in which year Julius Caesar (the memorable Roman Emperor) landed, like all other successful invaders of these islands, at Thanet. This was in the Olden days, when the Romans were top nation on account of their classical education, etc.

There were a great many plots and Parliaments in James 1\’s reign, and one of the Parliaments was called the Addled Parliament because the plots hatched in it were all such rotten ones.

Did you know that the Rump Paliament was so-called because it had been sitting for a long time or that Robin Hood was a Socialist?

George III was a Bad King. He was, however, to a great extent insane and a Good Man and his ministers were always called Pitt. The Pitts, like Pretenders, generally came in waves of about two, an elder Pitt and a younger Pitt.

The real story behind the Boston Tea Party:

The last event in Queen Victoria\’s reign was the Borewar, or, more correctly, Boerwoer (Dutch), which was fought against a very tiresome Dutch tribe called the Bores, because they were left over from all previous wars. 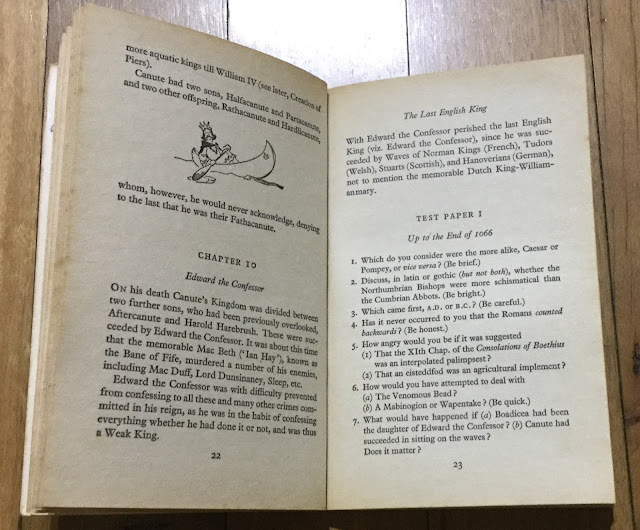 After the \’Peace to End Peace,\’ America was clearly the top nation and the authors claimed that History came to an end. Therefore their History, as written in this slim tome, is therefore final.
The book is out of print but readily available secondhand.

2 thoughts on “History is not what you thought…”