The Confessions of Saint Augustine is the final book I\’ve read this year as part of the Back to the Classics 2016 challenge. It\’s taken me all this year to get through it, not because it is a difficult read, (except for Book Ten which made my head spin) but because it is meaty and needs time to be chewed. 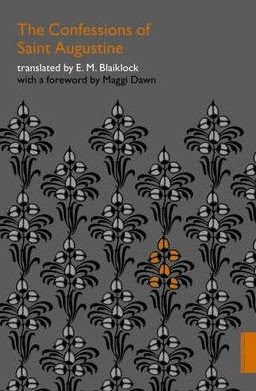 For those unfamiliar with the story of Augustine\’s life, this book records the backward looking thoughts and musings of a gifted intellectual and sensual man who lived a dissolute life for many year before saw Christianity as a religion fit for a philosopher. He recalls his struggles with moral difficulties and inordinate desires, and the crucial events in his life leading up to his conversion to Christianity, all against the backdrop of the decaying Roman Empire.
The foreword to the above edition of the book says:

His stories serve as hooks on which he hangs his big ideas, so that his journey from first rejecting to eventually embracing the Christian faith acts as a structure for him to teach his readers what it means to remember, to be human, to fail, and eventually to make peace with themselves and with God.

Confessions is less autobiography, and more performed theology. It delivers weighty theology, but it refuses to separate dogmatics from devotion, and embodies within its firm the message it conveys – that Christianity is a matter of relationship, conviction and action, not merely of intellectual belief.

Confessions is made up of thirteen books but the edition I read only includes the first ten. Some editions end with Book Nine as that is where the narrative of Augustine\’s life ends. Book Ten is included in Blaiklock\’s edition as it highlights that Confessions was not merely intended as a story, but its purpose was to teach the Christian faith. Book Ten also recalls Augustine\’s comments on \’Remembering\’ in his opening chapters.

I won\’t attempt to \’review\’ this book but rather share some comments thoughts that stood out to me and to recommend this particular edition as very accessible and readable.
Each Book has a short introduction that gives us some background on the times, and the events of Augustine\’s life.

…You made us for yourself and our heart is restless until it finds rest in you.

The house of my soul is narrow for your entry. Let it be enlarged by you. It is in ruins. Rebuild it.

On the beginnings of sinfulness:

That I was innocent lay rather in the frailty of my limbs than in my mind\’s intent. I myself have watched a very small child manifesting jealousy. It could not speak but glared, pale and hostile, at its companion at the breast.

In my very childhood, however…I had no love for learning and hated to be driven to it. Yet I was driven, and it did me good…

You have decreed, and so it stands, that every man\’s undisciplined spirit is his own punishment.

…some man seeking a reputation  for eloquence before a human arbiter, with an audience of men around him and in the act of assailing his foe with hate, takes the utmost care not to commit a fault of speech, but no care at all lest, through the rage if his spirit, he should destroy a fellow-man…

On his parent\’s ambitions for him and his father\’s pains to ensure his education:

Their sole care was that I should make the best possible speech and be a persuasive orator.
For who did not praise the man, my father, when beyond his family\’s means, he provided whatever was needed for a long journey for my studies\’ sake? For many citizens of far greater wealth took no such trouble for their children. Yet the same father took no thought of the kind of man I was becoming in your sight, or how chaste I was, provided I was cultivated in speech – though uncultivated in your field, God, you who are the only true, good husbandsman of that field which is our heart.

My sin oozed like a secretion out of fat.

Emulation contends for the top place, but what is higher than you?

Augustine goes to Carthage at the age of seventeen where \’a whole frying-pan of wicked loves sputtered all around me.\’
He lives with a girl who bears him a son, \’…not yet in love, but I was in love with love.\’
Verse and poetry I can change to real nourishment – this sentence jumped out to me. Poetry is a form of nourishment, at least I know it is for me & is something I expressed here.

Augustine writes about his mother Monica\’s prayers for him, especially when he became deceived with the Manichaean cult. When Monica went to a saintly bishop for counsel, he advised her to pray to the Lord for him. The bishop himself had been deluded by their teachings at one stage but she still pressed him, weeping, that he should speak to Augustine. His reply was, \’Leave me, and God go with you. It is not possible that the son of such tears should perish.\’

This book covers Augustine\’s life from the ages of nineteen to twenty-eight where he taught the art of rhetoric in Thagaste and Carthage. He tells of the \’disgusting an unruly lack of discipline\’ among his students, the illness of his close friend, his scorn of his friend\’s baptism and then his anguish as that friend had a sudden relapse and died.

For I felt his soul and my soul were one soul in two bodies. That is why life was a horror to me, because I did not wish to be only half alive.

Augustine \’escaped\’ to Rome in 383, tricking his mother by going secretly by night so he could get away from her without her knowing. Later he became ill and almost died. He wrote of this episode:

If my mother\’s heart had been struck with such a wound, it would never have been healed. I cannot find words to express what her love for me was…I cannot then see how she would have been healed, if a death like that had struck through the heart of her love.

At this time too, Augustine became disillusioned by the Manichaeans when their great leader, Faustus, couldn\’t address Augustine\’s intellectual difficulties.
Augustine took up a position at Milan as a professor of Rhetoric where he met Bishop Ambrose, a man he admired and who was to greatly influence him.

Monica arrives in Milan with Alypius, Augustine\’s former pupil, to find her son deeply influenced by Ambrose, who had been helping the young man address his moral difficulties. Monica also came under his influence and renounced her superstitious practices.
Alypius, although he had avoided such sports, was dragged along by some friends to a gladiator show. Augustine said that although Alypius forbade his mind to contemplate such things, it was his ears that he should have closed . As a result he becomes intoxicated with the gladiator shows and encouraged others to go as well.

The noise entered through his ears and unlocked his eyes…the sight of blood was like drinking barbarity. He did not turn away but fixed his eyes on it. Unknowingly he gulped down the Fiends of Hell.

Augustine is thirty-one and still wrestling. His is an inquisitive but undisciplined mind and I found it so interesting that he was influenced by Platonist writing to seek for \’incorporeal truth.\’

With strongest hunger then I laid hands on the venerable writings of your Spirit, above all the apostle Paul…I began and found that whatever I had read in the Platonists was said in Paul\’s writing along with the praise of your grace…

He also takes pains to enumerate those things that the Platonists knew nothing of:

Those pages do not hold the face of holiness, the tears of confession, \’your sacrifice, a troubled spirit, a broken and contrite heart\’, the salvation of your people…No one sings in those books: \’Shall not my soul be subject to God? Of him comes my redemption, he is my God and my salvation…
In the Platonist writings no one hears him call:\’Come to me all that labour.\’ They scorn to \’learn of him because he is gentle and quiet in heart.\’

\”Give me chastity and self-control but not yet.\”

Augustine\’s story comes to a climax as he hears the story of Victorinus, a former idol worshipper, who makes an open profession of faith in Rome. This inspired Augustine to want to do the same but the chains of his own making bound him.

…for I was afraid you might quickly hear me from afar, and swiftly heal me from the malady of lust, which I preferred to be sated rather have have extinguished.

Augustine is very honest and doesn\’t flinch in acknowledging his wilfulness and moral dilemma. This is so refreshing to read.
Augustine converts to Christianity and the rest is history, literally. Today he is regarded as one of the greatest fathers of the church and also one of the most important figures of Western Christianity.

There is an overview of Monica\’s life: her upbringing, marriage, conversations with her son and then her death.

Those who would find heir happiness outside themselves fade easily away and dissipate their persons on the ephemeral things before their eyes…If only they could see the eternity within their hearts.

My soul\’s Virtue, enter my soul, and shape it to yourself to have and to hold it without spot or wrinkle.

Men go to wonder at the heights of the mountains, and the huge billows of the sea, the broad sweeps of the rivers, the curve of ocean and the circuits of the stars, and yet pass by themselves…

Augustine\’s thoughts on memory makes up the bulk of Book Ten. This was the most difficult part of the book for me and I had to continually go over what I\’d read to make sense of it.

Late I came to know you, Beauty ancient yet new.

Augustine returned to Africa in 387 A.D. and later became Bishop of Hippo. He died while the town was besieged by the Vandals in 430 A.D.

This us what fascinates the classical historian. Augustine\’s cameo pictures of Thagaste, Maduara, Carthage, Rome, and later of Hippo are of sombre interest…
How little does the present know of the future! No one knew, when Augustus was establishing the frontiers of an imperial world, frontiers which were to hold precariously through four vital centuries of history, that the pivot of the human story had been moved one night from the Palatine to Palestine. No one knew in Thagaste that the frightened schoolboy, who was bad-tempered Patricius\’ son, was to leave behind him writings six times as voluminous as the whole corpus of Cicero himself, established theology through a millennium and more of strife and strain, and form one of the bridges between a dying world and that world\’s rebirth.

The Vandals scattered and slew Augustine\’s parishioners. Two centuries later the Moslems came that way with the desert trailing behind them. Augustine\’s work did not perish. It was blowing in the air. It steadied Medieval Christendom in varied ways, shaping Gregory, Charlemagne and Aquinas, and gusting more widely to touch Calvin, Luther, Pascal…

This is my Classic in Translation entry for the Back to the Classics 2016 challenge. (Confessions was originally written in Latin)

Also linking this to the 2016 Reading Europe Challenge