Allan Baillie\’s book Little Brother was published in 1985 and tells the gripping story of two brothers, Vithy and Mang, aged about eleven and eighteen years respectively, who were the only members of their family left alive after the communist Khmer Rouge came to power in Cambodia in 1975.
Renaming the country Kampuchea, the Communist Party set out to establish a rural based utopia and systematically annihilated anyone thought to be intellectual or educated, the wealthy and the religious leaders. The cities were emptied and people were placed into labour camps out in the country or executed if they were not able to work. 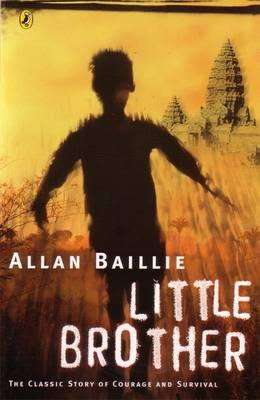 Little Brother begins with Vithy and Mang running through the forest after their captors were attacked by Vietnamese soldiers. They were pursued and forced to separate when Vithy fell and hurt his foot. Mang hid him in the undergrowth and then ran off to divert the soldiers – but Mang didn\’t return and Vithy was left on his own to follow his brother\’s last words – \’Follow the lines out of the war…go to the border.\’

Finding books that deal with situations such as those experienced by children in Cambodia that are suitable for younger children, allowing them to get a sense of what happened without traumatising them in the process, is quite difficult. Allan Baillie has managed to do this so well with this book. He tells the story through Vithy\’s eyes and employs a sort of flashback technique where Vithy recalls conversations with his brother or memories of certain events that fills in the details for the reader, without imparting the real horror that occurred. The character Vithy is based on a boy the author met at a refugee camp in Cambodia.

Mang had told him, many months ago, that the only way to survive in the Big Paddy was to be careful and dumb. Work hard, never let them know that you can read and write and handle arithmetic. Always rememeber your kid sister, Sorei. And above all, never think. But now he had to.

Vithy eventually finds his way to a Red Cross camp on the Thai border and wins his way into the heart of a crusty Australian doctor. I won\’t tell you any more but the book has a very satisfying ending…

Allan Baillie was born in Scotland and came to Australia when he was seven years of age. He has a background in journalism, has travelled to various parts of the world and many of his stories were inspired by his travels and experiences in foreign countries.

Recommended for Years 5 or 6. I use it as an Ambleside Online Year 6 free read.

Linking up with Brona\’s Books for AusReading Month