In 1953, Francis Crick and James Watson (who was only 24 years of age at the time) presented a scientific paper that proposed the double helical structure of DNA. Up until about 1944, DNA had been ignored and was considered to be \’the stupid molecule.\’ It was so simple, that it couldn\’t possibly play any major part in the body.
With the discovery of the double helix formation, the replication of genes and their role in the transmission of information from parents to their offspring became obvious. This discovery was a major turning point in science and the beginning of modern genetics. 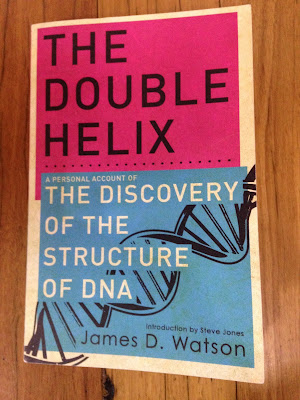 The Double Helix, first published in 1968, is an honest, humorous, chatty, and at times sarcastic, first-hand account by James Watson of his version of how DNA was discovered. An American, he moved to Cambridge University in 1951 after studying in the USA and Copenhagen. It was at Cambridge that he met Francis Crick, who, like himself, was interested in how genes were constructed and the role of DNA, and together they made the discovery that revolutionised biochemistry.
James Watson has written a unique book in many respects. This is the inside story – a glimpse into the rivalries, the insecurities and the ambitions of scientists; their struggles, triumphs and disappointments. Watson didn\’t hold back on his opinions and at times he was crude and unkind to his fellow scientists, but his honesty in portraying the attitudes and eccentricities of the scientific community was a refreshing approach.
I was impressed with the positive reactions from the various scientists when Crick and Watson\’s discovery became known. Previous rivals and runners in the race were genuinely thrilled with the news and recognised its huge impact for the development of science.
This is a good read for anyone interested in science and genetics. It does get a little technical in places but not enough that you\’d miss the gist of the story, although a good grasp of chemistry would definitely help. Watson gets sidetracked at times with comments on pretty girls, parties and random misogynist observations so I\’d recommend a pre-read if you\’re thinking of using it in high school.

\’I have never seen Francis Crick in a modest mood…\’

\’…there existed an unspoken yet real fear of Crick, especially among his contemporaries who had yet to establish their reputations. The quick manner in which he seized their facts and tried to reduce them to coherent patterns frequently made his friends\’ stomachs sink with the apprehension that, all too often in the near future, he would succeed, and expose to the world the fuzziness of minds hidden from direct view by the considerate, well-spoken manners of the Cambridge colleges.\’

\’One could not be a successful scientist without realizing that, in contrast to the popular conception supported by newspapers and mothers of scientists, a goodly number of scientists are not only narrow-minded and dull, but also just stupid.\’

7 thoughts on “The Double Helix: A Personal Account of the Discovery of the Structure of DNA by James D. Watson”