Stalin must command our unconditional respect. In his own way he is a hell of a fellow.
Stalin is half beast, half giant.
Adolf Hitler, 1942 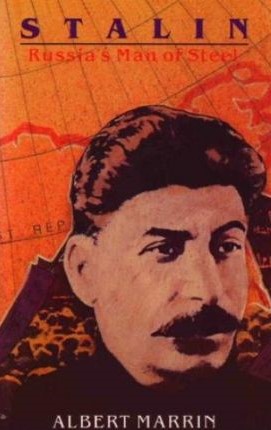 “A single death is a tragedy; a million deaths is a statistic.”
Joseph Stalin

Stalin: Russia’s Man of Steel by Albert Marrin is a biography of Joseph Vissarionovich Djugashvili, later known to the world by his adopted revolutionary name, Stalin, meaning “Man of Steel.”
It is also a very readable history of the origins of the Bolshevik Revolution and the rise of Communism in the former USSR.
World War II, the birth of the People’s Republic of China in 1949, the Korean War, and other events that occurred during Stalin’s rule and are also given coverage. The author writes for a young audience (around age 13 years and up) but his research is thorough and the book is interesting enough for adults. I really appreciated his description of the events leading to the Korean War, which I’d never really understood.
Stalin: Russia’s Man of Steel was published in 1988 about a year before the collapse of communism and ends with the ‘De-Stalination’ period and the rule of Nikita Khrushchev, a former Stalin henchman. Obviously the author’s view doesn’t take into account any information that may have been suppressed by the Communist government of the time so I’ve listed some websites at the end of this post that I came across while I was reading this book that fill in some of the missing details of the Stalin legacy.

Lenin, a genius in the use of propaganda, engineered the Bolshevik Revolution and with his ally, Trotsky, overthrew the government and established the rule of the Communist Party. Trotsky would have been the next leader in line after Lenin, but Stalin hated him and engineered his own rise to power and later Trotsky’s assassination in Mexico.

Life under the Tsars was miserable. The worst problem for eighty percent of Russian citizens who were peasants or mujiks, was hunger. Most were illiterate and very superstitious; sanitation amenities were non-existent.
After the Revolution the Russian people realised they had exchanged one autocracy for another.

‘The old tsar was gone and a new, red tsar stood in his place.’

The Okhrana was the tsarist secret police force. They never took hostages or tortured suspects and no one could be executed without first being convicted in a court of law.

The instrument of Red Terror was the Cheka, whose methods were later studied carefully by Hitler’s Gestapo. It declared itself to be the new morality:

“To us everything us permitted, because we are the first in the world to take up the sword not for the purpose of enslavement and repression but in the name of universal liberty and emancipation from slavery.”

Stalin worship, the cult of personality – Stalin’s propaganda machine made him into a Communist substitute for God. The Soviet people were brainwashed into believing that he was the greatest person who ever lived. He gave himself grand titles such as:

Children sang hymns to him in school, poems were written declaring him to be the creator of the world. Even the national anthem praised him and elevated him above the nation itself.

Totalitarianism is no ordinary dictatorship. A typical dictator is like a gangster; he rules by force for his personal profit and that of his supporters. He interferes in people’s lives only to protect himself and to exploit them. A totalitarian dictator wants more; actually, he wants everything. His goal is to remake his people by controlling all they do, think and feel. In effect, the have no privacy, no conscience, no life outside the system.

Lenin set up the first totalitarian system of modern times. In 1918, he established the first corrective labour camps  or ‘gulag’ in Siberia and the Soviet Union became the only major country in the twentieth century to have a permanent slave labour system. Kolyma, called the Land of the White Death, was one of these camps:

Kolyma was Stalin’s version of Auschwitz, Hitler’s huge camp for killing Jews in Poland during the Second World War. Hitler, when criticised for his death camps, once cried, “If I had the vast spaces of Siberia, I wouldn’t need concentration camps.”

Websites – I read through some of the articles below but I can’t speak for their accuracy. Just putting them here for interest sake:

Hitler vs Stalin in the evil stakes

Toward Soviet America – c1932. Interesting and weird. I was interested in Stalin’s educational efforts. His goal was to make loyal Communists; cogs in the industrial-military machine. Young people were trained to see themselves not as individuals, but as members of a group; that lying and cheating were fine if they helped the Communist cause. One good thing that did come out of his rule was the radical increase in the literacy rates, but then he wanted everyone to read his propaganda.

The Gulag Archipelago by Alexandr Solzhenitsyn (1918-2008) – I read this many years ago and it’s time for a re-read but anything by this author is worthwhile. A short bio is here.

One Day in the Life of Ivan Denisovich

Solzhenitsyn survived eight years of Stalin’s labour camps and this book describes one of those many days using a fictitious character.

Crime & Punishment by Fydor Dostoyevsky (1821-1881) – the murderer in this book is sent to a tsarist labour camp. Very different to those described by Solzhenitsyn.

Linking to the Reading Europe Challenge 2016 at Rose City Reader

8 thoughts on “Stalin: Russia's Man of Steel by Albert Marrin”