As Gregor Samsa awoke from unsettling dreams one morning, he found himself transformed in his bed into a monstrous vermin.
With these words Frank Kafka begins his bizarre, dark fantasy. 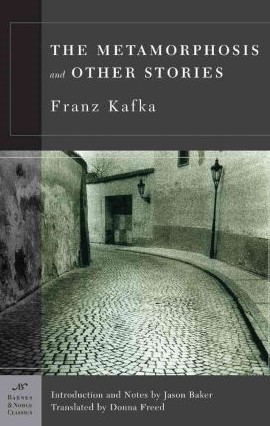 Gregor is a hard-working travelling salesman, the sole provider in his family; his parents and sister dependent upon him. He loathes his work and admits that he is the \’boss\’s creature, mindless and spineless.\’
On the morning of his transformation, his family are alarmed that he is still in his room at quarter to seven and knock on his door. He lies in bed, expecting the illusion he thinks he is under to gradually dissolve, and even as he makes a reply to his concerned family, he doesn\’t doubt that the change in his voice is due to a severe cold coming on.
Meanwhile, the head clerk arrives to find out why Gregor hasn\’t turned up for work, and is also waiting outside the bedroom door.
Gregor gets out of bed after a great exertion and manages to get to the door and eventually unlock it and so his metamorphosis is revealed to the horrified group standing there.
At first his family, especially his sister, cares for him and brings him food, but gradually he is neglected and expected to keep to his room. After a while they think of him no longer as a son or brother but as \’it.\’
Gregor had decided he was going to send his sister to the Conservatory the next year, even though it involved considerable expense, and was planning to announce his intentions on Christmas Eve. A very poignant moment occurs when her parents ask her to play the violin for their three boarders. As she performs, Gregor advances into the room, mesmerised by her playing.

Her face was tilted to one side and she followed the notes with soulful and probing eyes. Gregor advanced a little, keeping his eye low so they might possibly meet hers. Was he a beast if music could move him so? He felt as though the path to his unknown hungers was being cleared.

This is definitely an unusual story, fascinating, but in the end not very satisfying. Even the author thought this and said it had an \’unreadable ending. Imperfect almost to its very marrow.\’
Kafka was born in Prague and spoke both Czech and German, but he wrote in German. As with any translation, choices are made by the interpreter. The \’monstrous vermin\’ of the translation I read, has been rendered \’unclean animal not suited for sacrifice\’ and \’gigantic insect\’ in other translations.
Kafka was intentionally vague about the metamorphosed Gregor and when the book was going to press he told his publisher, \”The insect itself cannot be depicted. It cannot even be shown from a distance.\” (Endnotes of the Barnes & Noble Classics edition above)
I spent the whole book wondering how large Gregor the \’insect\’ was. He managed to reach the lock on the door but he could hide under a sofa. He could also be pushed around the floor with a broom. If he had been the size of a regular insect, even an very large one, he wouldn\’t have been so obvious to everyone and no one would have equated him with once having been a man. It sounds rather illogical – but Kafka doesn\’t make sense! This comment from the introduction to the book above partly explains why:

Kafka\’s fiction examines a universe largely unexplored in the literature preceding him, one full of implications that venture into the remote regions of human psychology. It\’s a universe with different rules than those governing our reality. And there\’s no map.

According to the writers of Invitation to the Classics, Kafka\’s worldview is Nihilism, that is, he rejects all meaning, so he is left with a great nothingness:

Human beings, once seen as a link in the Great Chain of Being connected both upward to God and downward to animals, are now connected only downward. Without the image of God, humans beings are dehumanised. With the death of God has come the death of humanity. This is Kafka\’s central lesson.

Frank Kafka (1883-1924) was only forty-one years of age when he died of tuberculosis. His family was Jewish and although at first he was indifferent to  his religious heritage, he later became fascinated by it.
In 1933 the Nazi\’s banned and publicly burned Kafka\’s work. In 1942 they put two of his sisters into a Polish ghetto where they died. His youngest and closest sister was married to an \’Aryan\’ and was not deported, but in an act of defiance, she divorced her husband and was sent to Auschwitz and died there.

Invitation to the Classics: A Guide to Books You\’ve Always Wanted to Read – edited by Louise Cowan and Os Guiness. There\’s a chapter devoted to Kafka, mostly relted to another of his books, The Trial, but it offers some insights into his life.

How Should We Then Live: The Rise & Decline of Western Thought & Culture by Francis A. Schaeffer. I love this book and how the author weaves in history, music, art, and literature. Although first published in 1976, this book is just as pertinent for our times.

The Barnes & Noble edition I read had a short bio and some notes which enhanced my understanding of Kafka.

This book is my entry in the Back to the Classics Challenge 2106 for a Classic which has been banned or censored.