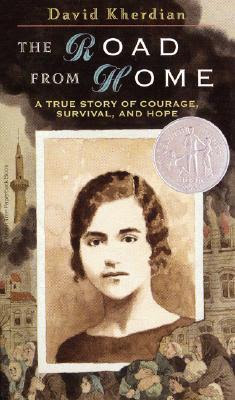 David Kheridian prefaces the story of his mother, Veron Dumehjian, with the statement by Adolf Hitler below. Hitler was referring to the Turkish Government’s decision twenty-three years previously that all Armenians living in Turkey were to be destroyed.

I have given orders to my Death Units to exterminate without mercy or pity men, women, and children belonging to the Polish-speaking race.
It is only in this manner that we can acquire the vital territory which we need. After all, who remembers today the extermination of the Armenians?
Adolf Hitler (August 22, 1939)

The author uses his mother’s voice to tell her own story, from her childhood growing up in a prosperous, loving home with her extended family in the Armenian quarter of Azizya in Turkey, up until her mid-teens.
The Armenian population made up about ten percent of the population of Turkey prior to World War I but with the rise of nationalism, the Ottoman Army used the cover of war to settle the ‘Armenian Question’ and to bring about the ‘Turkification’ of the country. Talaat Pasha, as the Minister of the Interior, was the chief architect of this process.

September 16th
To the Prefecture of Aleppo:
You have already been advised that the Government, by order of the Djemiet, has decided to destroy completely all the indicated persons [Armenians] living in Turkey.
All who oppose this decision and command cannot remain on the official staff of the empire.
Their existence must come to an end, however tragic the means may be; and no regard must be paid to either age or sex, or to conscientious scruples.
Minister of the Interior, TALAAT.

Throughout the country tens of thousands of Armenians, which included Vernon and her family, were forcibly deported to the Syrian Desert.
By about 1920, one and a half million out of the two million Armenians living in Turkey at the start of the war had been killed. Today, it is estimated that there are only about 50 to 70 thousand Armenians in Turkey but for years the Turkish government has refused to acknowledge this massacre of its Armenian citizens.

The Road From Home is a 1980 Newbery Honor Book and is a simply told story about a young girl’s journey of faith, courage and hope in the midst of this little known period of history.
The book goes into some of the details of how the Armenian deportees were treated: the youngest boys were circumcised and converted to Islam, the oldest sold into slavery; the women who were willing to convert were attached to harems; those who didn’t convert were raped and then either murdered or sold to the Arabs.
I was shocked to read about what happened to some of the refugees who managed to reach Smyrna on the western coast of Turkey. After three years of Greek administration, their rule ended in that city and the Turks took over and began to march through the streets. Veron escaped and crowded onto the quay with other refugees when the Turks set fire to the Armenian quarter. French, American and British ships were in the harbour ready to take their own citizens but they made no move to help the refugees. However the Italians were shouting to the people nearest to them to jump and swim to their small boats so they could be saved. The Turkish soldiers blocked off any escape from the fires and people either died or threw themselves into the sea. A raft load of refugees was attempting to leave the shore when two Turkish soldiers flung kerosene over them and set them alight.
When people tried to swim out to the large ships only the Italians would take them aboard. The English poured boiling water down upon them and the Americans were lined up on their decks with their movie cameras going!

Veron lost most of her family during this period but nonetheless the story is full of hope and has a lyrical quality. The author includes a map showing the places mentioned, yeah! – I don’t know why all authors who write books relating to history don’t do this. It annoys me no end when they don’t because it is so helpful and helps me to connect with the story. Age appropriateness –  high school age (around 14 yrs and up or a read aloud with younger students; there’s no offensive or inappropriate language). Adults would also appreciate it, especially as there probably isn’t a great deal written on this subject.

All the love that was given me since we left home I had simply taken for granted, but I was no longer the child that I had been when we started on our
journey. Something deep inside me, which I knew was love, was going out to all the people who were with us on our march. Everything was being shared; no one thought only of himself, but rather, it seemed as if each of us put the other person first. We all were trying to make the other person’s load lighter, and for some reason this, more than anything we might have done for ourselves, made our own load lighter as well. I realised that without the children to be saved, the elders might not have found the reason to go on, and without the elders to guide us, we, of course, would have been helpless victims.

3 thoughts on “Reading Europe: Turkey – The Road From Home by David Kherdian”