Winter is definitely here and we\’ve even had some snow falls about an hour and a half away from us. Between the cold snap and a persistent cough that has worn me out by keeping me awake at night, it\’s been an ideal time to indulge in some light but literary reading.
Enter P. D. James.
I say \’light reading\’ but P. D. James didn\’t write cozy mysteries like Agatha Christie. In some ways she is similar to Flannery O\’Connor in her use of external situations to reflect what is going on within a character. She wrote in a literary style but the content of her books is often uncomfortable as she explores the unpredictability of the human heart . Disordered love is a recurring theme in her writing. Violent, horrific and dreadful, are words that could be used to describe situations in her stories, but murder is all these things…

Murder is the unique crime; it\’s the only one for which we can never make reparation to the victim. We feel that the murderer steps over an invisible line which divides him or her forever from the rest of us. It is an astonishing act and we regard it with horrified fascination. I think most of us are capable of quite atrocious sins, but I do believe that comparatively few of us are capable of deliberately planning the death of another human being.
P.D. James

The Black Tower by P.D.James 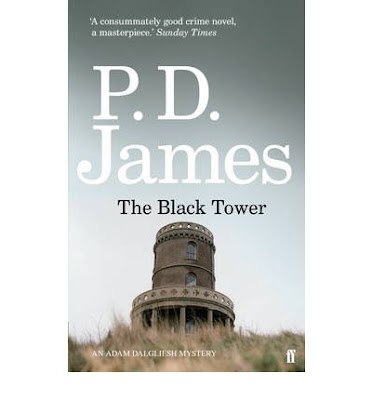 P. D. James concerned herself more with why rather than who, and I enjoy the ability she had to thresh out her characters. In The Black Tower (1975) James\’ fifth mystery novel, this character development is mostly focussed on her detective, Adam Dalgliesh.

It was, he had thought, uncommonly inconsiderate of his doctors to reconcile him so thoroughly to death and then change their minds. It was embarrassing now to recall with what little regret he had let slip his pleasures and preoccupations, the imminence of loss revealing them for what they were, at best only a solace, at worst a trivial squandering of time and energy. Now he had to lay hold of them again and believe that they were important, at least to himself.

Commander Adam Dagliesh, having resigned himself to the fact that he had acute leukaemia and wasn\’t long for this world, felt a sense of outrage when this diagnosis was proved to be incorrect. Instead, his doctor happily bestowed on him an atypical mononucleosis complicated by a bout of pneumonia.
Sleepless nights during his illness allowed him to take a dispirited inventory of his life. He had lived an emotionally detached and self-sufficient life after the death of his wife and child, and had used his grief, his job and his poetry to justify his actions. Now feeling ill-equipped to return to his previous occupation at Scotland Yard, he was left with the conviction that it was time for him to get away from the world of crime and courts, manhunting and corpses.

He wasn\’t sure whether this disenchantment with his job was caused solely by his illness, the salutary reminder of inevitable death, or whether it was the symptom of a more fundamental malaise, that latitude in middle-life of alternate doldrums and uncertain winds when one realizes that hopes deferred are no longer realizable, that ports not visited will now never be seen, that this journey and others before it may have been a mistake, that one has no longer even confidence in charts and compass.

There was a personal commitment he needed to fulfil now that death could not excuse him. An invitation had come from the elderly priest, Father Baddeley, an old family friend and his father\’s curate, asking him to visit.
Eleven days later, Dalgleish drove out of London and headed to Dorset where his old friend now served as chaplain to Toynton Grange, a private home for the young chronic sick and disabled.

He smelt for the first time the clean half-illusory salt tang of the sea. The air moved warm and gentle against his skin. He was suddenly suffused with happiness and, as always in these rare transitory moments, intrigued by the purely physical nature of his joy. It moved along his veins, a gentle effervescence. Even to analyse its nature was to lose hold of it. But he recognized it for what it was, the first clear intimation since his illness that life could be good.

Dalgleish arrived at Toynton Grange to find that his old friend had died suddenly eleven days previously and his body cremated six days after that. There was no reason to suspect foul play; the man was in his eighties, but Dalgliesh had a sense of foreboding that all was not as it seemed. When other deaths occur he finds himself in dangerous territory and once again fighting for his life. 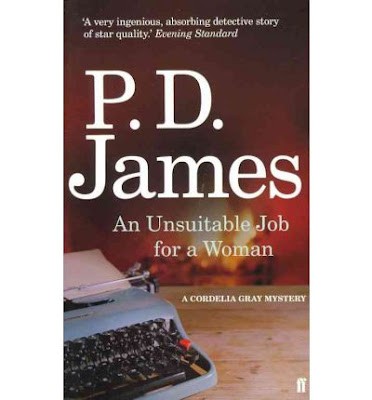 This is the first of two books that introduces P. D. James\’ female sleuth, the vulnerable and courageous Cordelia Gray. Adam Dalgliesh is referred to throughout the book but it isn\’t until the final chapter that he actually makes an appearance.
Cordelia Gray is a twenty-two year old woman who inherits a run-down detective agency after the death of its principal, Bernie Pryde, an ex-detective who previously worked under Inspector Dalgliesh.
Cordelia is frequently told that her work is \’an unsuitable job for a woman,\’ but she is determined to keep the agency going for the sake of her old partner.
Just after she returns to the office after Bernie\’s funeral, she has a visit from a woman who is representing Sir Roger Callender, a well known scientist. Callender\’s son, Mark, committed suicide eighteen days beforehand and his father wants to know why his son hanged himself.
Cordelia starts to investigate what led the young man to this point and discovers a trail of insidious family secrets. When an attempt is made on her own life she is convinced that Mark\’s death was the result of murder and not by his own hand.
There is nothing cozy about this novel with its 1970\’s Cambridge University setting and a family full of disordered loves and secret sins. Cordelia Gray is a very likeable sleuth and the last chapter where she is interviewed by Dalgliesh is one of my favourite parts of the book.

Bernie wouldn\’t have been any help here. To him the moral dilemma at the heart of the crime would have held no interest, no validity, would have seemed a wilful confusion of straightforward facts…
But the Superintendent might have understood…She recalled Ronald Callender\’s words that love was as destructive as hate. Would Dalgliesh assent to that bleak philosophy? She wished that she could ask him. This, she recognized, was her real danger – not the temptation to confess but the longing to confide.

\’How the detective fiction of P.D. James provokes theological thought.\’

2 thoughts on “Some Light, Literary Reading”