Girl With a Pearl Earring is set during the 17th Century in the Dutch city of Delft. It is a work of historical fiction involving the artist Johannes Vermeer and this painting: 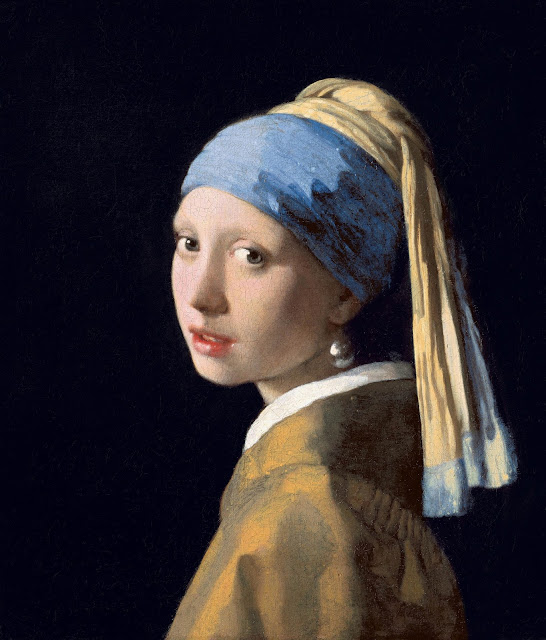 This is a quick and quite enjoyable book to read and is told from the viewpoint of Griet, a 16 year old girl sent to work as a maid in the Vermeer household.
When Griet\’s father is blinded in an accident at work, she must work to help to support her parents and her younger sister. Griet\’s brother, Frans, has already been apprenticed out and lives elsewhere.
Griet goes to live with the Vermeer family and becomes a little besotted by the artist. There is friction between Griet and other members of the household, including Vermeer\’s wife, Catharina, and this escalates when Vermeer asks Griet to grind expensive pigments for him and later uses her as a model for his \’Dutch Mona Lisa.\’

It was strange to meet so many new people and see so many new things in one morning, and to do so apart from all the familiar things that made up my life. Before, if I met someone new I was always surrounded by family and neighbors. If I went to a new place I was with Frans or my mother or father and felt no threat. The new was woven in with the old like the darning in a sock.

Chevalier\’s writing is quite descriptive and overall she captures a sense of the times but Griet\’s character sometimes spoiled the story for me. The novel would have had more appeal for me if its intended audience was clearer. There were a couple of places where I thought it went beyond the place I\’d feel comfortable giving it to someone in their mid-teens. On the other hand, it lacked the depth I\’d expect from an adult novel – characters were a little flat and undeveloped, and the ending felt rushed.
Not much is known of Vermeer\’s life but Chevalier obviously did quite a bit of research into the artist\’s life and coupled it with her imagination to paint a picture for her readers. 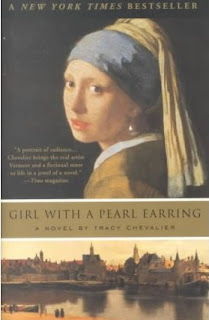 I liked this part of the conversation between Vermeer and Griet when she had asked him if his paintings were Catholic (Griet was a Protestant):

\”It\’s not the painting that is Catholic or Protestant,\” he said, \”but the people who look at it, and what they expect to see. A painting in a church is like a candle in a dark room – we use it to see better. It us the bridge between ourselves and God. But it is not a Protestant candle or a Catholic candle. It is simply a candle.\”

\”There is a difference between Catholic and Protestant attitudes to painting,\” he explained as he worked, \”but it us not necessarily as great as you may think. Paintings may serve a spiritual purpose for Catholics, but remember too that Protestants see God everywhere, in everything. By painting everyday things – tables and chairs, bowls and puckers, soldiers and maids- are they not celebrating God\’s creation as well?\”

The maid Griet is fictitious, but many of the other characters in the book were real people in Vermeer\’s life – Anton van Leeuwenhoek, the \’father of microbiology;\’ Pieter van Ruijven (Vermeer\’s patron), Vermeer\’s wife, Catharina, and her mother, Maria Thins, for example. These links to actual historical people were interesting as were Chevalier\’s attempts to fill in the background of this celebrated and mysterious portrait. If you would enjoy a mix of some art history and a light read, this would be a good book to while away an evening or two on.

Linking this to Reading Europe Challenge 2016: The Netherlands

9 thoughts on “Reading Europe: The Netherlands – Girl With a Pearl Earring by Tracy Chevalier”