Leon Gellert (1892-1977) is said to have written some of the best poetry that came out of WW1 and is generally considered to be Australia\’s finest war poet. I stumbled upon one of his poems in a small anthology of Australian verse, The Call of the Gums, and sought out more of his work. A volume of his poems, which was published as Songs From a Campaign, hasn\’t been reprinted since 1917, as far as I know, and it\’s not easy to find his poetry in print.
The drawings below were done by Gallipoli artist, Major Hore (1870-1935). They are taken from  Gallipoli & the Anzacs site, which also contains the background information related to the drawings and much more besides. It is well worth a good look around. 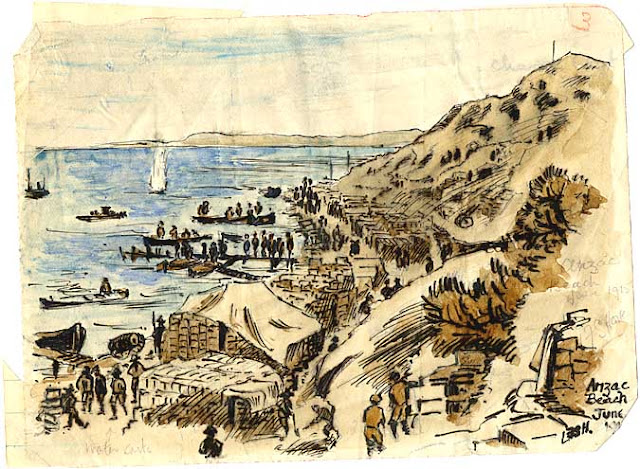 Leon Gellert, aged 23 years old, landed on Anzac Beach (better known as Anzac Cove) on 25 April 1915 with the 10th Battalion, South Australia. In July he was evacuated to Malta due to illness and shrapnel wounds, and after that to London. There he was declared medically unfit for duty, and was discharged from the forces at the end of June. 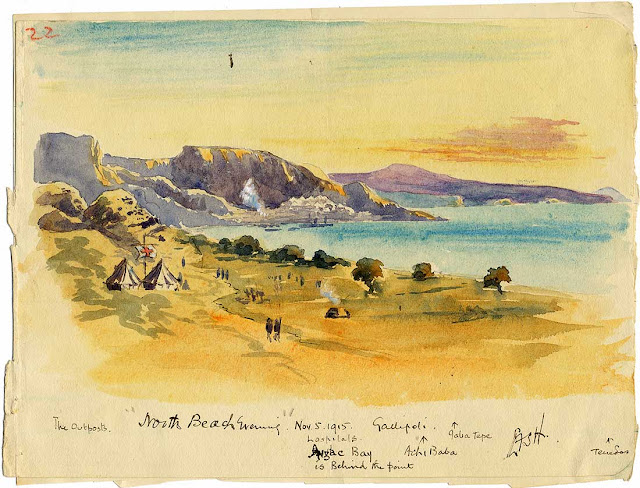 There’s a lonely stretch of hillocks:
There’s a beach asleep and drear:
There’s a battered broken fort beside the sea.
There are sunken trampled graves:
And a little rotting pier:
And winding paths that wind unceasingly.
There’s a torn and silent valley;
There’s a tiny rivulet
With some blood upon the stones beside its mouth.
There are lines of buried bones:
There’s an unpaid waiting debt:
There’s a sound of gentle sobbing in the south. 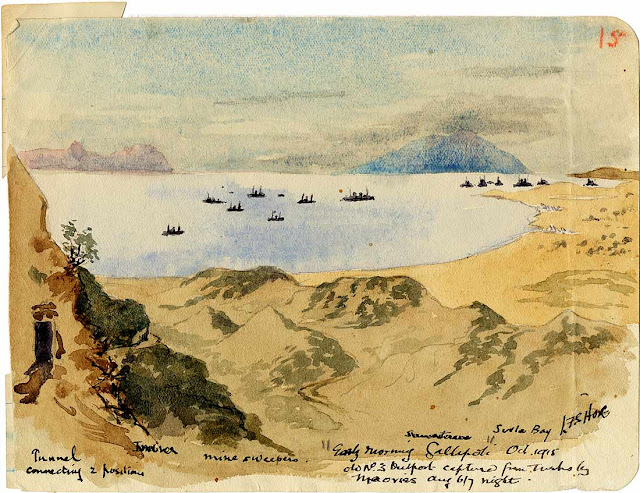 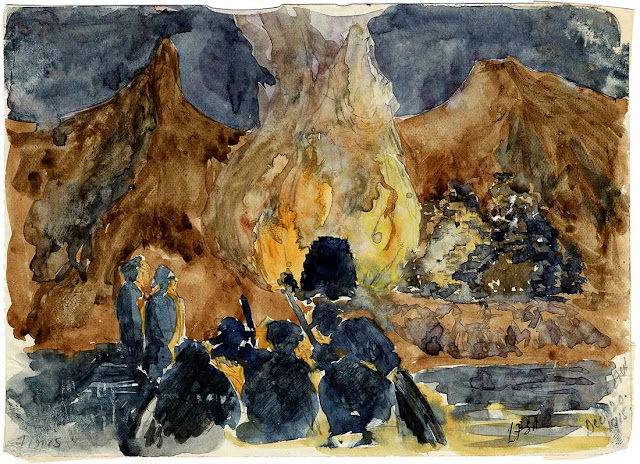 The Last To Leave

The guns were silent, and the silent hills
had bowed their grasses to a gentle breeze
I gazed upon the vales and on the rills,
And whispered, \”What of these?\’ and \”What of these?
These long forgotten dead with sunken graves,
Some crossless, with unwritten memories
Their only mourners are the moaning waves,
Their only minstrels are the singing trees
And thus I mused and sorrowed wistfully

I watched the place where they had scaled the height,
The height whereon they bled so bitterly
Throughout each day and through each blistered night
I sat there long, and listened – all things listened too
I heard the epics of a thousand trees,
A thousand waves I heard; and then I knew
The waves were very old, the trees were wise:
The dead would be remembered evermore-
The valiant dead that gazed upon the skies,
And slept in great battalions by the shore.

A short biography of Gellert is here and some of his poems are available online e.g. allpoetry,
and as a PDF here.
The AusLit  website has a list of the contents of Gellert\’s book Songs of a Campaign.

I\’m linking this post to the Poetry Month Celebration at Edge of the Precipice.