The Death of Marat by Jacques-Louis David, 1793 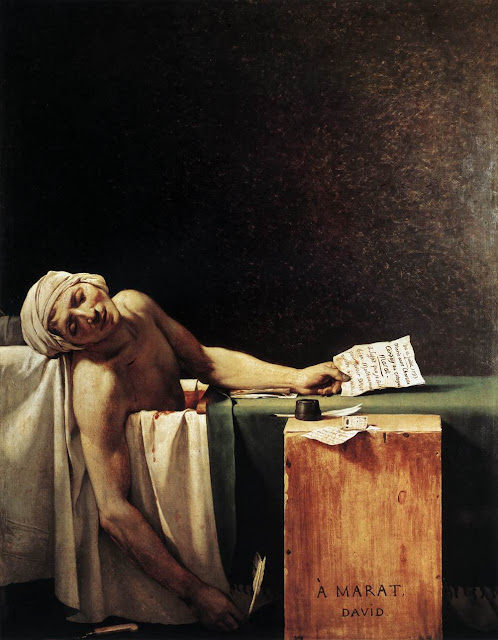 Paris, 1783, and the code of honour among the French aristocracy was rigid and without logic. When the wealthy bourgeois Paul Delourede blundered and inadvertently offended a young hot-headed aristocrat, Vicomte de Marny, the only acceptable outcome was a duel.
Delourede was a brilliant swordsman and having the advantage, his intention was to disarm the younger man, but the Vicomte became reckless and lunged at his opponent, falling upon the other\’s sword.

Vicomte de Marny had a younger sister, Juliette, fourteen years old at the time. Their invalid father, the Duc de Marny, had lost his wife ten years previously and his mind was fast losing its reason. Juliette was his joy but the Vicomte was his pride. On him the old man rested his hopes and in his future he saw the glory of the family name recreated.
On the evening of the fateful duel, the Victome\’s body was carried home. The old man, when left alone with his daughter, threw off the lethargy he had shown on first seeing his dead son, and feverishly seized his daughter\’s hand. Placing it upon her dead brother\’s breast, he made her swear an oath to avenge her brother\’s death.

Ten years later, Delourede was a well-known and respected citizen. Up until this time Juliette had nourished revenge in her heart but when circumstances placed her under Delourede\’s protection, she began to know the real character of the man and was torn between his kindness and growing love for her and the oath she\’d made.

I mentioned that The Scarlet Pimpernel should be read prior to this book. He plays a short but important role in this story and a knowledge of the first book helps in appreciating the Pimpernel\’s comments to Delourede about love and idolatry which hearken back to his own painful experience.

\”And \’twill be when you understand that your idol has feet of clay that you\’ll learn the real lesson of love,\” said Blakeney earnestly.

\”Is it love to worship a saint in heaven, whom you dare not touch, who hovers above you like a cloud, which floats away from you even as you gaze? To love is to feel one being in the world at one with us, our equal in sin as well as in virtue. To love, for us men, is to clasp one woman with our arms, feeling that she lives and breathes just as we do, suffers as we do, thinks with us, loves with us, and, above all, sins with us. Your mock saint who stands in a niche is not a woman if she have not suffered, still less a woman if she have not sinned. Fall at the feet of your idol an you wish, but drag her down to your level after that—the only level she should ever reach, that of your heart.\”

An excellent & comprehensive website containing information on all things Scarlet Pimpernel is Blakeney Manor. The books are available as e-texts on this site also.

The book is set completely in Paris and is my selection for France in the Reading Europe Challenge 2016.

3 thoughts on “A Sequel to The Scarlet PimperneI…Reading Europe: France”