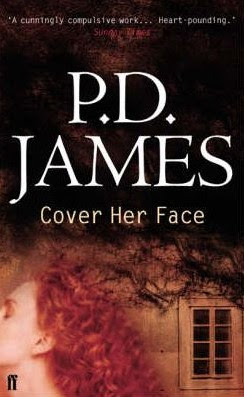 Sally Jupp was \’pretty, intelligent, ambitious, sly and insecure.\’ Docile and grateful on the surface, she was employed as a parlourmaid in the Maxie household after being highly recommended by Miss Liddell. Nothing was known of Sally\’s past, except that she was orphaned as a child and brought up under the care of a guardian. An unmarried mother, she had been living at the St Mary\’s Refuge for Girls run by Miss Liddell, and was said to be Miss Liddell\’s \’favourite and most favoured delinquent.\’
Sally had not been long in service at the Maxie household when she began to undermine her superiors and display arrogance towards other members of the household.

One evening she dropped a bombshell by announcing her engagement to the Maxie\’s only son, Stephen, a doctor. Not long after this event, Sally was found strangled in her bed and suspicion fell upon the whole household. When Detective-Chief Inspector Adam Dalgliesh arrived on the scene to investigate, Sally\’s enigmatic past came to light and with that, the murderer also.

I\’ve always enjoyed P. D. James\’s literary writing style but often her stories are disturbing and push the edges of what I feel comfortable with. Once or twice I didn\’t finish a book because of this – A Certain Justice (1997) was one of those. I don\’t think I even got as far as the second chapter.

Cover Her Face, a domestic whodunnit and her first novel, was published in 1962, and unlike some of her later books, had a similar feel to some of the golden age detective fiction I\’ve read.
Set in an English village, the story revolves around the family manor. The local vicar makes an appearance, the household servants are loyal. All up, a cosy sort of mystery that kept me guessing until the very end.

I thought James\’s device of divulging the characters\’ thoughts as they were  interviewed by Dalgliesh added to the mystery. There was some nice little psychological rumination by each of the major suspects that cleverly lifted the suspicion from them just when I thought I\’d guessed the culprit.
There was a poignant little twist at the end which revealed a softer side to the chilly, cerebral character of P.D. James\’s sleuth.

The title is taken from an English Renaissance play, The Duchess of Malfi, Act IV, scene II:

\’Cover her face; mine eyes dazzle: she died young.\’

I enjoyed these quotes by the author which are taken from this interview:

\’… I was educated in the state system at an old-fashioned grammar school in Cambridge. In those days state education was very good, but I had to leave at sixteen because university was not free and my family could not afford to pay for me. I would have loved to have gone to university, but I don’t think I would necessarily have been a better writer, indeed perhaps the reverse. Looking back I feel I was fortunate: we had dedicated teachers who were attracted to Cambridge, which is a very beautiful and stimulating city, and stayed. They were women who would have been married but for the slaughter of men in the First World War. Only one had been married and she was a widow. They gave us all their dedicated attention. When I left school I had read more Shakespeare and other major poets than many a university graduate today. It astounds me how narrow and limited their reading is compared to ours.\’

\’I believe that political correctness can be a form of linguistic fascism, and it sends shivers down the spine of my generation who went to war against fascism. The only way to react is to get up in the morning and start the day by saying four or five vastly politically incorrect things before breakfast!\’

Cover Her Face by P. D. James is my choice for A classic detective novel in the Back to the Classics Challenge 2016.