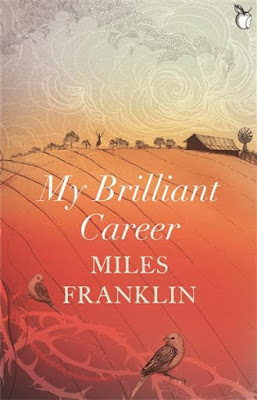 Stella Maria Sarah Miles Franklin was nineteen years old when she sent the manuscript of My Brilliant Career to the publishing firm Angus & Robertson in 1899. Initially rejected, her manuscript was sent to another publisher in London where it was later put into print after a few revisions.

The book, set in the late 19th Century in country New South Wales, has as its main character, Sybylla Melvyn, a girl whose dream was of a brilliant career as a writer. Sybylla\’s parents were well thought of in their comunity and lived comfortably, but when she was about nine years old her father unwisely decided to move the family to a small farm near the town of Goulburn, in order \’to have more scope for his ability.\’

This was a feasible light in which father shaded his desire to leave. The fact of the matter was that the heartless harridan, discontent, had laid her claw-like hand upon him.

Within the space of twelve months, Syblla\’s father had squandered his savings. His short-lived career as a stock dealer and his predilection for alcohol had ruined him.
Reduced to hard work on their property, Sybylla\’s once genteel mother became embittered and her relationship with Sybylla, her eldest daughter, was one of constant friction.

Dick Melvin being my father did not blind me to the fact that he was a despicable, selfish, weak creature, and as such I despised him with the relentlessness of fifteen, which makes no allowance for human frailty and weakness. Disgust, not honour, was the feeling which possessed me when I studied the matter.
Towards mother I felt differently. A woman is but the helpless tool of man – a creature of circumstances…

One day a letter came from Sybylla\’s maternal Grandmother suggesting she be sent to live with herself and Aunt Helen, and so sixteen year old Sybylla was unexpectedly taken from her life of drudgery into very different circumstances.
Aunt Helen was a gracious and beautiful, but firm woman, who had been deserted by her dashing husband after only twelve months of marriage. She took Sybylla under her wing, instructed and encouraged her niece, lifted her out of the gloomy introspection she was prone to indulge in, and before much time had passed Sybylla found herself the object of numerous suitors.
Harold Beecham, a wealthy neighbour and a friend of her Grandmother\’s family, became a regular visitor and Sybylla found herself very attracted to him. He was to be her first, her last and her only real sweetheart.
Suddenly required by her mother to leave her privileged circumstances and take a position as a governess to help the family financially, she was torn between Harold\’s offer of marriage (done in a no nonsense fashion, which confused Sybylla) and her own independence. Accepting Harold\’s offer would give her a way out of the drudgery that would otherwise be her lot, but Sybylla wanted to be a writer and why on earth had he chosen her of all women?

I had no charms to recommend me – none of the virtues which men demand of the woman they wish to make their wife…I was erratic and unorthodox, I was nothing but a tomboy – and, cardinal disqualification, I was ugly. Why, then, had he proposed matrimony to me? Was it merely a whim? Was he really in earnest?
Some thoughts:

I mentioned that Franklin was still in her teens when she wrote My Brilliant Career and that is reflected in her writing. She captures all the angst and confusion that often goes with this time of life – the sense of being ugly and different to everyone else – and Sybylla was a convincing character in that respect. Her attitude annoyed me but I remember having similar feelings and struggles when I was that age myself.  Hindsight is a very handy commodity at times.
Sybylla is idealistic and headstrong and doesn\’t really know what she wants. She agrees to marry Harold but then pushes him away, and totally misjudges his character. She plays with his emotions, one minute encouraging his advances and the next spurning them.

At last! At last! I had waked this calm silent giant into life. After many an ineffectual struggle I had got a little real love or passion, or call it by any name – something wild and warm and splendidly alive that one could feel, the most thrilling, electric, and exquisite sensation known.
I thoroughly enjoyed the situation, but did not let this appear.

Sybylla\’s attitude towards men in general is quite derogatory but she also has a very low opinion of herself and considers herself to be ugly and hateful.

She also knew that her thoughts were destructive:

Among other such inexpressible thoughts I got lost, grew dizzy, and drew back appalled at the spirit which was maturing within me. It was a grim lonely one, which I vainly tried to hide in a bosom which was not big or strong enough for its comfortable habitation. It was as a climbing plant without a pole – it groped about the ground, bruised itself, and became hungry searching for something strong with which to cling. Needing a master-hand to train and prune, it was becoming rank and sour.

Apart from thinking that Sybylla needed a good kick in the pants and wondering if Miles Franklin herself would have been of a similar ilk, I did enjoy the literary style. Considering that the book was written more than a hundred years ago and is considered an Australian classic, it was quite an achievement for a person still not out of her teen years.
This book is a literature text used in Year 12 in Australian schools.

My Brilliant Career was out of print for many years and the first Australian edition was published as late as 1966 by Angus & Robertson, the same firm that had rejected her first manuscript.

On the 28th September 1901, The Sydney Morning Herald had this to say of Miles Franklin\’s heroine:

\”My Brilliant Career,\” by Miles Franklin (a copy of which reaches us from Messrs. Angus and
Robertson) is a creditable essay in prose fiction by a young Australian girl.
The heroine of the story (which by the way is prefaced by a few words from the pen of Mr. Henry Lawson) is not a person whose acquaintance in the flesh it would be desirable to make.
She is thoroughly good, morally, but she has a distinctly unpleasant way of asserting herself and her goodness. It would be matter for regret if she – \”Sybylla Melvyn\” is her name – could possibly be taken as a type of Australian bush girl.
Bold, forward, and selfish Sybylla is the sort of girl that is happily rare in Australia.
The story itself and Miles Franklin\’s way of telling it are interesting mainly as promise of better things, which should be well within the compass of the author.

Some information on Miles Franklin is here & here.

I borrowed a copy of the book from the library but I liked the look of the hardback Virago Modern Classic pictured above.
It\’s been a long time since I saw the 1979 movie version of My Brilliant Career. I think I liked it except that I remember I wasn\’t fussed on Sam Neill playing the part of Harold Beecham. Here\’s a trailer of the movie:

Linking this to Brona\’s Books Ausreading Month and the Aussie Author Challenge at Booklover.