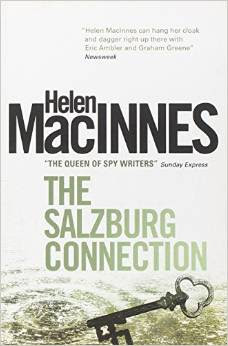 Settling down for a cozy read of this Cold War novel, I started to absorb myself in the character of former British spy, Richard Bryant. The story was interesting to start with but by the end of the second chapter it became completely engrossing after a most unexpected occurrence, and continued tense and unpredictable to the very end.
Twenty-two years after the end of World War II, Richard Bryant set out alone to uncover a secret. At the close of the war the retreating Nazis hid a sealed chest in an Austrian lake, high up in the Alps, and Richard Bryant was one of the few people alive who knew of its existence.
Bryant\’s success in his solitary mission unleashed a train of events and implications that touched everyone connected with him, catching them up in a tangled web of intrigue and danger.
This book was definitely a page turning, thoroughly enjoyable novel of the Cold War Era although I did find the plot convoluted at times and had difficulty working out which side the characters belonged to – then again that\’s the nature of espionage.
Helen MacInnes and her husband experienced the Europe of World War II as the Nazis were rising to power and her first book, Above Suspicion, was drawn from that experience. The antagonists in her books are usually either Nazis or Communists and as her editor of twenty-five years said of her:
\’\’Her purpose always was to strike at authoritarian governments.\”
Besides the ability to craft a credible and realistic story, MacInnes\’ writing is of a high quality and very descriptive.
We have old plain hardbacks or paperback editions of her books with tacky pictures on the front but the book above is one of the newer editions brought out by Titan Books in 2013.
MacInnes\’ books contain some adult themes but I haven\’t found anything yet in her books that is objectionable or unsuitable for about age 15 years and up. My teen-aged children really liked this book.
\’The business of education is with us all our lives…\’

2 thoughts on “The Saltzburg Connection by Helen MacInnes (1968)”