On our trip to South Australia a couple of years ago we saw plenty of emus in the open areas of land along the way. These large flightless native birds are second only in size to the world\’s largest bird, the African ostrich and are also related to the cassowary and the rhea. We\’ve gotten up close to them in captivity and they are ungainly, formidable looking creatures but when you see them in the wild, running through the scrub, they are quite spectacular and beautiful.
This year I read Karrawingi the Emu by Leslie Rees to Moozle. The story follows the life of an emu (Karrawingi is one of the Aboriginal terms for emu) from its birth through to adulthood. It presents a vivid picture of the dangers a young emu encounters, sometimes even before it\’s hatched out of the egg – wedge-tailed eagles, dingoes, other emus, Aboriginal hunters and farmers are their main enemies. 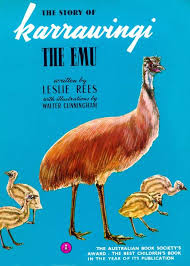 Karrawingi grows to adulthood, finds a mate and becomes a leader of a great flock. He has numerous children and grandchildren and with the other emus, keeps his distance from man. But hunger and curiosity bring the emus back to the lands where they had roamed previously. They find the land fenced off and farmed and they begin to wreak havoc; breaking fences, devouring the crops and then for a bit of fun, they get in amongst the sheep and their lambs and send them in all directions.
The day comes when Karrawingi is captured and taken to a small town zoo. For ten months he is fed, looked at and laughed over. He becomes used to soft living and at night he dreams confusedly – sweet, yet painful dreams.
One morning Karrawingi awakes to unusual movement. Men come in a van and the gate to the yard opens. His keeper grabs his wings from behind and places him in a box-like van:
What was happening to him now? He was sick with fear of the unknown. So long he had lived at the small town zoo, where the things to do and see hardly varied from month to month, that the sudden change was terror itself, no matter what life was in store for him. He wished he were back in his strong-fenced zoo. There nothing happened, but he was safe.
The van, racing along the gravel road, is far from the nearest town when Karrawingi\’s eyes fall upon a sight which makes his heart pound – a flock of emus on either side of the road, pacing themselves with the van:
What thoughts the sight sent pounding through his mind! Now he felt himself among the emus, racing with them, now he was a prisoner in the van, his nerves and muscles itching with the desire to get out…
Mile after mile sped by and the emus kept up their gait.
Karrawingi could stand it no longer.
This is an exciting story which conveys in a realistic fashion the nature and habits of the emu. Karrawingi is a very likeable larrikin and while the author isn\’t overly sentimental, the emu\’s personality is endearing. I was relieved that the old bird got a chance at freedom again after a great escape, and that the story ended satisfactorily with this realistic comment:
For how long Karrawingi would roam the bush a second time no one could tell. It was enough now that all the wild hot joy of the old days was surfing through his body.
Karrawingi the Emu has been published as a separate book and also as a part of A Treasury of Australian Nature Stories, which contains four other stories by Leslie Rees of various native animals. Both books are out of print but keep your eyes open; it is a real treasure of a story. I think around the age of 9 or 10 years is a good age for Karrawingi. It\’s certainly not dumbed down and would appeal to anyone interested in the natural world, Australian or otherwise. 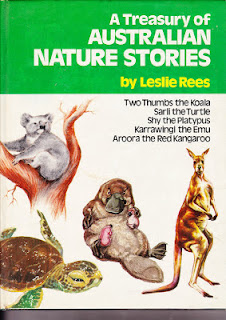 Younger children (aged about 4 to 8 years) would enjoy Emu by Claire Saxby. I discovered this at the library and was pleasantly surprised with it. Although not as detailed or literary as Karrawingi, it is well done. It is a good sized picture book – \’a narrative non-fiction.\’ The left hand-side page contains the story while the right hand page is written in a more factual fashion. 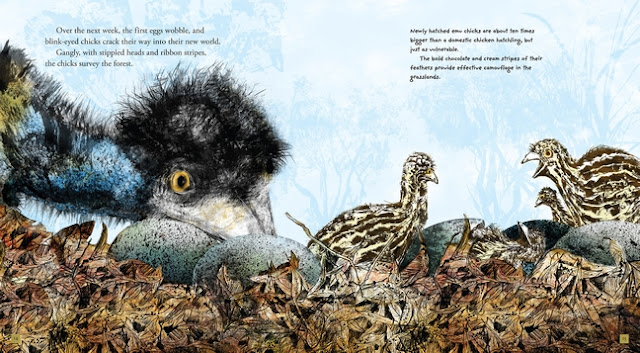 There is a PDF document designed for classrooms that has some suggestions for using the book as well as some emu facts. There\’s a \’look inside\’ feature on Amazon if you want to have a better idea of what the book contains. 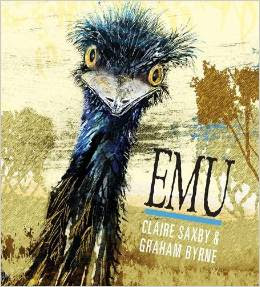