In the month of January I’m linking up at Simpler Pastimes for Amanda’s Classic Children’s Literature event. I only have two books selected, as I think that’s all I’ll have time for:

It’s not easy to find a story that presents a realistic picture of World War II and is at the same time appealing and suitable for younger children but The Winged Watchman by Hilda van Stockum satisfies this criteria.
Written in 1962 and set in the years 1944 & 1945 during the Nazi occupation of Holland, The Winged Watchman is a work of fiction which accurately portrays occupied Holland at that time, as readers who lived through those days have attested. But, of course, many other books have been accurate in their portrayal of this time period. What the author did in this book to make it appropriate for young children was:

* To include enough realism to make it believable, while at the same time
* To temper the story with an underlying optimism that good will eventually conquer evil
* To view the war through the lens of a young boy in an warm & happy family

The war years are seen through the eyes of Joris Verhagen, a ten year old boy, who lives with his father and mother; his brother Dirk Jan aged fourteen, and their little ‘sister’ Trixie, in the Rynsater polder. Their father, a millwright, was responsible for keeping the polder (a piece of reclaimed land) dry, and he operated the old wind-powered mill, ‘The Watchman.’

Joris was six years old when the Nazis overran Holland and was incredulous when Dirk Jan talked about life before the war. Joris had only known rationing, the drone of English bombers and the sense of an always present danger.
In Joris’s eyes, everything was black and white.
When the Germans posted a notice ordering all dog-owners to present their dogs for inspection so that useful animals could be drafted into the army, Joris was devastated that his beloved, energetic dog, Freya, would be taken.

Why doesn’t God stop the Germans?
Why does He let them continue to do awful things?
He could just kill them all!

When his mother told lies to protect a life, Joris was shocked and said so. His mother’s reply told him what he had vaguely felt was right, but his black and white thinking wouldn’t allow him to accept:

“It is bad when you hide the truth from someone who has a right to it, and in a normal world, where people try to obey God, everyone has a right to the truth.
But when you know that the other person is going to use the truth to maim and kill, do you think he still has a right to it?
The Germans…broke their treaty with us, invaded our country, bombed our cities, chased away our lawful government, killed or deported our men, women and children…
Do you think they have a right to the truth?
You are right to hate lies, my dear. But remember that truth itself becomes a lie in the twisted minds of our conquerors.”

The Verhagens lived in the country and were better off than the city-dwellers who faced severe food shortages, but they had their own share of troubles and danger.
Their neighbour’s son was a traitor who spied on them continually and the author used the tension involved in this situation and other areas to explore the theme of moral responsibility.
Moral responses aren’t always black and white, as Joris learns, and the right choice often comes at a cost. It cost the Verhagen family a great deal but at the end of the war, when peace finally came, they were counting their blessings – thankful, despite their losses.

I read this book aloud some years ago and this month I read it for the first time with my youngest. It remains one of my favourite, not to be missed, books for children.
It is a simple, faith-filled story and is an ideal vehicle for presenting and discussing such things as truth, courage, wisdom and moral responsibility.
Children around the age of about 7 years and up (or younger, depending on the child) would love this book but if you have an older child who hasn’t read it, I’m sure they would enjoy it also.
As with another World War II book, The Hiding Place by Corrie ten Boom (which I highly recommend for older children & adults) civil disobedience is an important concept that could be discussed alongside moral responsibility. 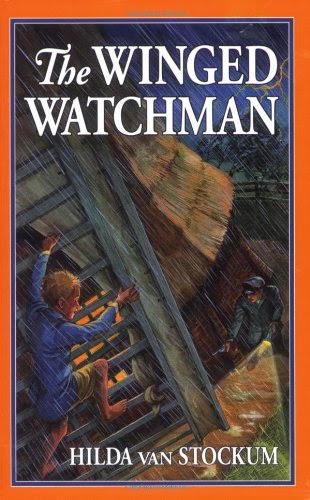 Hilda van Stockum dedicated her book to her brother, a Royal Dutch Air Force pilot who was killed during a bombing raid over France in 1944. He wrote the following words, which capture the sentiment expressed in the book, before his death:

“I could stand idly by and see every painting by Rembrandt, Leonard da Vinci and Michelangelo thrown into a bonfire and feel no more than a deep regret, but throw one small, insignificant Polish urchin on the same bonfire, and by God, I’ll pull him out or else. I fight quite simply for that…It is as simple as St. George and the Dragon.”

The Winged Watchman is published by Bethlehem Books.
191pg.