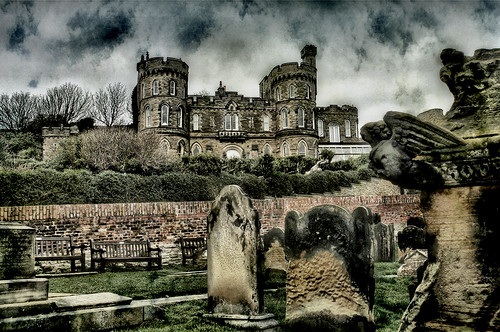 All true histories contain instruction; though in some, the treasure may be hard to find, and when found, so trivial in quantity, that the dry, shrivelled kernel scarcely compensates for the trouble of cracking the nut.
So the youngest of the three famous Bronte sisters begins the first chapter of her first novel, Agnes Grey.
Published in 1847 when Anne Bronte was just 27 years of age, Agnes Grey is written in the first person and stems from her own experience as a governess. The author poignantly relates the experiences of a young woman leaving a home where she is loved and valued, to enter into a very different sphere – one that was to prove cold and isolated and where her person was overlooked and disregarded.
When her father is ruined financially, Agnes, the youngest of two sisters, decides to look for a position as a governess. The first reaction from her family is one of astonishment:
My mother uttered an exclamation of surprise, and laughed. My sister dropped her work in astonishment, exclaiming, \’You a governess, Agnes! What can you be dreaming of?\’
\’Well! I don\’t see anything so very extraordinary in it. I do not pretend to be able to instruct great girls; but surely I could teach little ones, and I should like it so much: I am so fond if children. Do let me, Mamma!\’
\’But my love, you have not learned to take care of yourself yet: and young children require more judgment and experience to manage than elder ones.\’
\’But , Mamma, I am above eighteen, and quite able to take care of myself, and others too. You do not know half the wisdom and prudence I possess, because I have never been tried.\’
However, Agnes eventually gains her parents\’ consent and a position is found for her with the Bloomfield family.
Agnes quickly finds that her pupils are undisciplined and quite feral. Mrs Bloomfield dotes on her eldest son especially, and Agnes is expected to instruct and supervise her three students and take responsibility for their conduct whilst being denied any authority over them. She is blamed for their uncultivated manners and unruly tempers and is treated as an inferior:
I can conceive few situations more harassing than that wherein however you may long for success, however you labour to fulfil your duty, your efforts are baffled and set at nought by those beneath you, and unjustly censured and misjudged by those above.
Anne is dismissed by the Bloomfields, returns home and later finds another position; this time charged with the training of two willful sisters, Rosalie and Matilda.
During this time Agnes meets Mr. Weston, the new curate, and the only individual outside of her immediate family who shows her any consideration. Rosalie, meanwhile, is developing into a very attractive young lady whose main aim in life is to have young men lay their hearts at her feet. She turns her attentions to Mr. Weston when she becomes aware that Agnes is fond of him.
Anne Bronte captures the pain of this so beautifully:
Whether she intended to torment me, or merely to amuse herself, I could not tell — and did not much care; but I thought of the poor man and his one lamb, and the rich man with his thousand flocks; and I dreaded I knew not what for Mr. Weston, independently of my own blighted hopes.
The two sisters went out of their way to prevent Agnes having anything to do with Mr.Weston, even resorting to outright lies and deception. Rosalie planned benevolent visits to the poor cottagers in places Mr Weston frequented – an activity she had never previously shown any interest in. She invented trivial excuses to gain his attention and made sure Agnes was kept occupied to prevent her coming into contact with him. Agnes was powerless and in her distress she wrote:
Oh, they have robbed me of the hope
My spirit held so dear;
They will not let me hear that voice
My soul delights to hear.
They will not let me see that face
I so delight to see;
And they have taken all thy smiles,
And all thy love from me.
Well, let them seize on all they can; —
One treasure still is mine —
A heart that loves to think on thee,
And feels the worth of thine.
Mr.Weston may prove to be a man of good sense and character but Agnes has an uncertain path ahead of her and returns home to visit her ailing father.
Charlotte and Emily, the authors respectively of Jane Eyre and Wuthering Heights, are better known in the literary world than their younger sister, Anne. Agnes Grey is a very different novel from those of her sisters,\’ especially when you consider the male characters in each of the books. Anne\’s hero is a steady, considerate man, whereas the characters of Mr. Rochester and Heathcliff in her sisters\’ books are dark, moody and unpredictable.
Her sisters\’ books are full of drama and romance while Agnes Grey is more realistic and perhaps this and the fact that she died at a young age, has caused her writing to be overshadowed by that of her sisters.\’
In her story, Anne Bronte gives us an insight into the difficulties faced by single women of limited means in Victorian times. The emotional pain of a young woman who is overlooked by the opposite sex by reason of her social standing, while a morally inferior woman is elevated, is exquisitely expressed and gave me an appreciation for the quality of character Anne Bronte must have possessed.
There is an interesting biography of the author here and a website devoted to the Bronte family here.
A new plaque has been laid on Anne\’s grave as the original below has deteriorated and had the wrong age of Anne at her death.