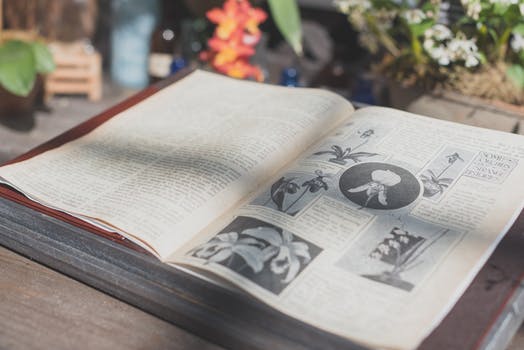 About eighteen months ago I modified Ambleside OnlineYear 9 for my 16 year old son, Nougat. He\’d previously done AO Year 8 as is, with a couple of exceptions, but Year 9 is heavy on American History so I decided to change things to suit our Australian situation.

It\’s not until you try to make large adjustments to the Ambleside Curriculum that you realise how much work went into its preparation in the first place, so where possible I\’d much prefer to follow it as written.
Year 9 covers the time period 1688 to 1815 which fits well with early Australian History so I made the decision to use this year to focus on that.
What I was concerned about most in making changes to AO (besides the amount of time, effort and research involved!) was:
1) Keeping the page counts of the books I used as substitutes as close as possible to the original count.
2) Keeping the chronological order and flow of the time period that Year 9 covers.
3) Choosing appropriate living books as substitutes.
The following are some thoughts and ideas related to the three concerns above that were helpful to me as I made these adjustments:
1) Comparing the amount of pages that Charlotte Mason had her students read at different levels. I wanted to make sure my son wasn\’t going to be short changed by my choices and that he was suitably challenged. This page on the AO website addresses this.
2) Churchill\’s History (Age of Revolution) used as scheduled for Year 9 helped me keep a sense of continuity. Written by a British author, this series of books scheduled throughout AO\’s upper years, is suitable for any country that was or is part of the Commonwealth. This comparative chronology – which I found online at archive.org. helped me in places where I needed to substitute a book and keep the chronological flow intact.
3) Living books is a term that\’s widely used and I\’ve seen all sorts of books given this label by people from many different educational slants. Seeing that it was Charlotte Mason who coined the term, it makes sense to know what her opinion was. The quotes are taken from her Home Education Series volumes 2 & 6 unless otherwise noted:
The books shouldn\’t be twaddle (worthless, tedious, trivial, feeble).
They should be written with literary power.
They should contain \’mind stuff,\’ both quality and quantity.
They should not be watered down and drained of literary flavour.
The book should enable the child to receive,
\’impressions new and vivid from some other mind which is immediately receiving these impressions; not after they have been made stale and dull by a process of filtering through many intermediate minds, and at last find their way into a text-book.\’ Vol 2: pg. 278
It must be,
\’living, vital, of a nature to invite the living Intellect of the universe.\’
They must have the best,
\’…children must have books, living books; the best are not too good for them; anything less than the best is not good.\’
A.W. Tozer said something similar, although he was not talking only about children:
\’Since what we read in a real sense enters the soul, it is vitally important that we read the best and nothing but the best.\’
The books should require mental labour. A Parent\’s Review article said that some books,
\’give children the minimum of mental labour and the result is much the same as that left on older persons by the reading of a magazine. We find on the other hand that in working through a considerable book the interest of boys and girls is well sustained to the end.

The boys and girls gain knowledge as they dig for it; labour prepares the way for assimilation, that mental process which converts information into knowledge…\’

Sir Walter Scott, an author admired by Charlotte Mason, wrote:
\’Children derive impulses of a powerful kind in hearing things which they cannot entirely comprehend, and therefore to write down to children\’s understanding is a mistake.\’
I like to know something of an author\’s background when I read anything they\’ve written for the first time. Knowing something of the author\’s history and character may help determine whether the writing has a living quality or not. This quote from a Parent\’s Review article is an insightful thought on the \’living\’ author. The whole article is well worth reading:
\’… good literature is the natural result of that sane outlook which only comes from a share in the active life of humanity and a living conviction of the significance of daily toil, of words and deeds and human relationships, and, above all, of the beauty of the world, and from a living faith too in God, and the triumph of Good over Evil. As soon as men cease themselves to live, and only write, the effect is evident in a certain lack of virility in their outlook.\’
The book should not be just informative:
\’For the mind is capable of dealing with only one kind of food; it lives, grows and is nourished upon ideas only; mere information is to it as a meal of sawdust to the body.

\’… it seems to be necessary to present ideas with a great deal of padding, as they reach us in a novel or poem or history book written with literary power. A child cannot in mind or body live upon tabloids however scientifically prepared; out of a whole big book he may not get more than half a dozen of those ideas upon which his spirit thrives…\’

Vol. 6 chpt. VI
Other considerations:
Two (or more) heads are better than one. Being a part of a community such as the Ambleside Online Forum provides access to a wide range of other home educators with various gifts, abilities and experience in home education and using CM\’s ideas. Tapping into these resources can save a lot of time and bring to light something we might have neglected to consider. Discussing ideas on the forum may also help someone further down the track who encounters the same need to modify the curriculum to suit the circumstances they are in.
I posted a weekly schedule for the first twelve weeks of the year here using the adjustments I made.
This post shows the Australian History & Geography selections I found for Year 9. He didn\’t use every single one of them but these were some I thought would work. I also tried to find books that were available free online or were easily obtained from an Australian library.
This post shows the breakdown of books in each subject area.
Nougat completed the year and I used his studies to give him a Year 10 equivalent certificate. He received a credit for every subject he covered fully for the year and to gain the certificate he was required to have 12 credits. For example, completing Saxon Algebra 1 was worth one credit, as was completing the assigned history readings for the year, as was doing his double bass practice, orchestra involvement and having weekly music lessons and so on.
To obtain a percentage for the grade level, I either averaged his test marks (maths) or based it on the quality of his written narrations, the completion of books scheduled for various subjects, pages done in his science notebook etc.
This is basically how I structured it: 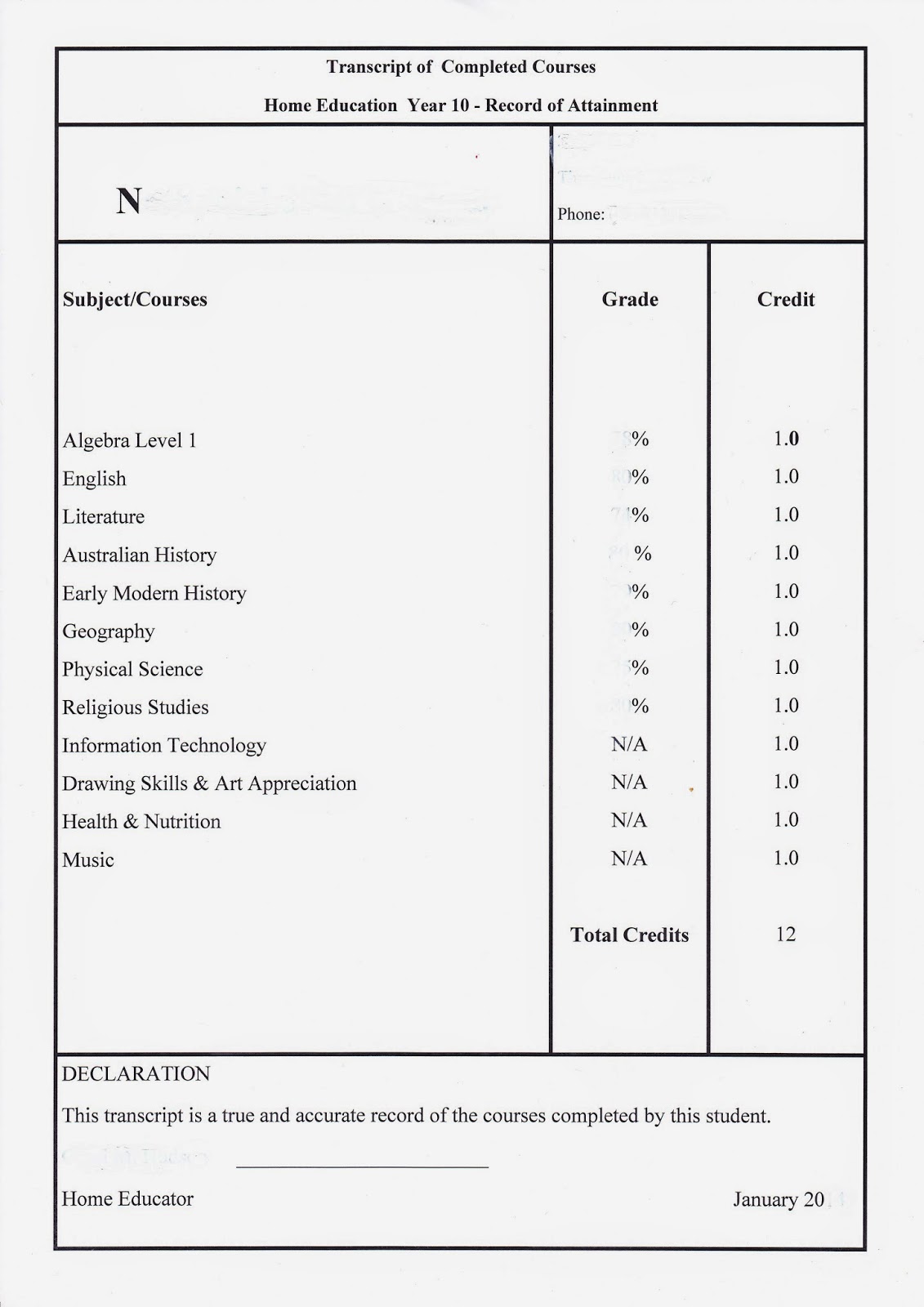 With both Nougat and his older brother, Hoggy, we\’ve had to produce something that employers can relate to as they didn\’t have \’official\’ documents. We were asked if I they had had any \’formal\’ education and our answer was, \”Yes, but not at an institution.\”
Large training companies often have a compulsory entrance exam and both boys were able to do these and get good marks but we first had to put together comprehensive resumes/portfolios to show that they had the required academic ability and skills before we even got in the door. In some ways this was harder than navigating the university path for their three older siblings.
\’The business of education is with us all our lives…\’

5 thoughts on “Book Substitutions When Using Ambleside Online – Some Considerations”