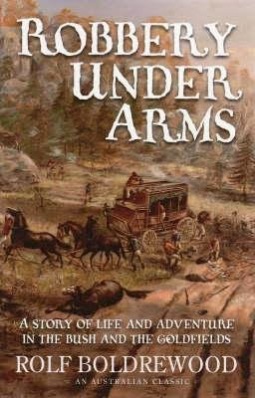 Robbery Under Arms is a ripping good yarn set in the mid 1850’s in the colony of New South Wales and is narrated in the first person by a young man, Dick Marston, who tells his tale using the vernacular of the time.
Dick’s father was a cattle duffer and he drew Dick and his younger brother Jim into his schemes, ignoring the objections and pleadings of his wife and daughter. After being involved in numerous escapades and criminal activities, Dick and his brother became fugitives, and Dick was eventually caught and imprisoned. He begins his story in a prison cell awaiting the day determined for his hanging.
…it’s all up now; there’s no get away this time; and I, Dick Marston, as strong as a bullock, as active as a rock wallaby, chock-full of life and spirits and health, have been tried for bush ranging – robbery under arms they call it – and though the blood runs through my veins like the water in the mountain creeks, and every bit of bone and sinew is as sound as the day I was born, I must die on the gallows this day month.
As he looks back on his life, Dick reminisces about his home life and family and the events leading up to his capture. From cattle stealing with his father, adventures with the swashbuckling Captain Starlight, the gold rush of the 1850’s and bush ranging escapades, to humorous encounters and colourful characters, the story creates an authentic and vivid picture of colonial New South Wales and Western Victoria.
Everything seemed dead, silent, and solitary, and a rummier start than all, here we’re we – three desperate men, driven to make ourselves a home in this lonesome, God-forsaken place! I wasn’t very fanciful by that time, but if the devil had risen up to make a fourth amongst us I shouldn’t have been surprised. The place, the time, and the men seemed regularly cut out for him and his mob.
I’d had this book for quite a few years but I’d put off reading it because I expected it to be a depressing colonial story. Sometimes Australian books set in this time period are a bit that way but I really enjoyed this one.
The background setting of the gold rush in a part of the story was very interesting and overall the book painted a wonderful picture of Australian life seen from the point of view of a working class lad, the son of a former convict. It fits in well to a study of Australian History during the colonial time period and Ambleside Online Year 10. Suitable for around ages 14 years and up.
The book is available for free at Project Gutenberg and this website has information on the goldfields of New South Wales:
http://www.goldtrails.com.au/html_files/explore/sofala-link-history.html