Australia\’s Prime Ministers From Barton to Howard
by Brian Carroll 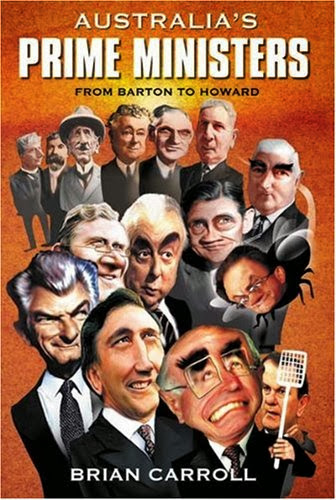 I was pleasantly surprised to find a book about the Prime Ministers of Australia that was fairly even-handed in its approach to the topic. I came to the book with the preconception that the author would have a bias towards a particular political party, as that seems to be the usual case in political journalism, but he has succeeded in presenting a balance view of these leaders (despite the fact he has admitted Paul Keating is his favourite PM).
As the title of the book indicates, the author starts with Australia\’s first PM, Edmund Barton and follows the the highs and lows of the twenty-five PM\’s who have served in the office of Prime Minister over more than 100 years of Federation up to the 2004 election. The last chapter is about the 2004 election that was approaching just before the book was published in the same year and in it the author discusses possible contenders from both sides of politics for the future leadership of the country.
This book is an interesting and lively account of an aspect of Australian politics and would suit readers of around the age of 14 years and up. Some of these PM\’s had colourful speech and there are quotes which reflect this but they are few and far between.
Losing office at the hands of the electors or the Opposition does have a certain grandeur about it. Some Prime Ministers have suffered the ignominy of being cast aside by their colleagues.
There\’s a story about the young parliamentarian who took his seat for the first time, looked across the chamber, and said to an elder colleague, \’There they are! The enemy!\’
\’No, young fella,\’ the elder colleague said. \’That\’s the Opposition. The enemy are sitting all around you.\’
When the founding fathers wrote Australia\’s Constitution, in the 1890\’s, they took what seemed to them to be appropriate parts of both the American and British systems.
When the Commonwealth of Australia came into being, on the 1 January 1901, it was a parliamentary democracy without a parliament, at least until the first election.
In the meantime, the new nation needed a government, even if only to organise the election. The task of choosing the first Cabinet would fall to the first Prime Minister, and the task of choosing the first Prime Minister would fall to the first Governor-General.
Images of Australian Prime Ministers from 1901 up to the present which might be useful for a Book of the Centuries or Timeline plus other information can be found here.
\’The business of education is with us all our lives…\’