This has been my year of the Russian novel. Mind you, I’ve only read three but the first two, The Brothers Karamazov and Crime and Punishment both by Fydor Dostoevsky were epics – not just because of the length of the books themselves but also due to the rambling narrative and the confusion of keeping track of the Russian character’s names and derivatives.

I made the mistake of starting with The Brothers K. It was the most difficult of the three to follow and there were a few times when I wondered why on earth I was reading it but I plodded on as I really wanted to find out where it was going. I couldn’t for the life of me begin to explain what it was about, except that it involved the Karamazov brothers, their father and a broad sweep of moral and philosophical arguments and ramifications.
Even though it was a struggle to read, my overall opinion is that it is a significant, thought provoking book and the overarching theme is one of redemption.
The impact and significance of the book doesn’t lie in the story line of the book but in the themes that lie beneath its content.
One Day in the Life of Ivan Denisovich by Alexander Solzhenitsyn, the third of the Russian novels that I’ve read this year, was a pleasant surprise in contrast by being so much more readable, not to mention shorter, at only 143 pages. 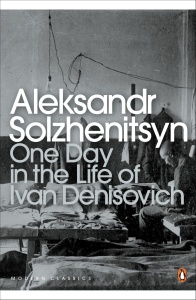 Both Dostoevsky and Solzhenitsyn wrote out of their own personal experiences. Dostoevsky faced a firing squad in 1849 for his involvement with an illegal group but had a last minute reprieve of his sentence and was sent instead to a Siberian labour camp, while Solzhenitsyn spent eight years in a labour camp for making depreciating comments about Stalin in 1945.
Ivan Denisovich Shukov is the main character in Solzhenitsyn’s story and is serving time in a Soviet prison camp during the 1950’s due to the fact he was captured by the Germans during the war and subsequently is falsely accused of being a spy. The story describes one day of Ivan’s (he is generally referred to in the story by the name of Shukov) life in the camp with an engrossing narrative. I was waiting for something awful to happen at the end of Ivan’s day but it didn’t occur. Instead as Ivan gets into his bunk at the end of a long, weary and eventful day he says…
‘Glory be to Thee, O Lord. Another day over. Thank you I’m not spending tonight in the cells. Here it’s still bearable.’
He lay head to the window, but Alyosha, who slept next to him on the same level, across a low wooden railing, lay the opposite way, to catch the light. He was reading his Bible again……Alyosha heard Shukov’s whispered prayer, and turning to him:
‘There you are, Ivan Denisovich, your soul is begging to pray. Why, then, don’t you give it it’s freedom?’
Shukov stole a look at him. Alyosha’s eyes glowed like two candles.
‘Well, Alyosha,’ he said with a sigh, ‘it’s this way. Prayers are like those appeals of ours. Either they don’t get through or they’re returned with “rejected” scrawled across ’em….’
‘But Ivan Denisovich, it’s because you pray too rarely, and badly at that. Without really trying. That’s why your prayers stay unanswered. One must never stop praying…’
This was a brilliant little book and a good introduction to Solzhenitsyn in particular and Russian novels in general.
In retrospect it would have been good to start with this book. I think Crime and Punishment would be a better introduction to Dostoevsky for a first timer but I think both books are rich, reflective and fascinating works.
One Day in the Life of Ivan Denisovich is scheduled in Free Reads, Ambleside Online Year 11

5 thoughts on “The Year of the Russian Novels”